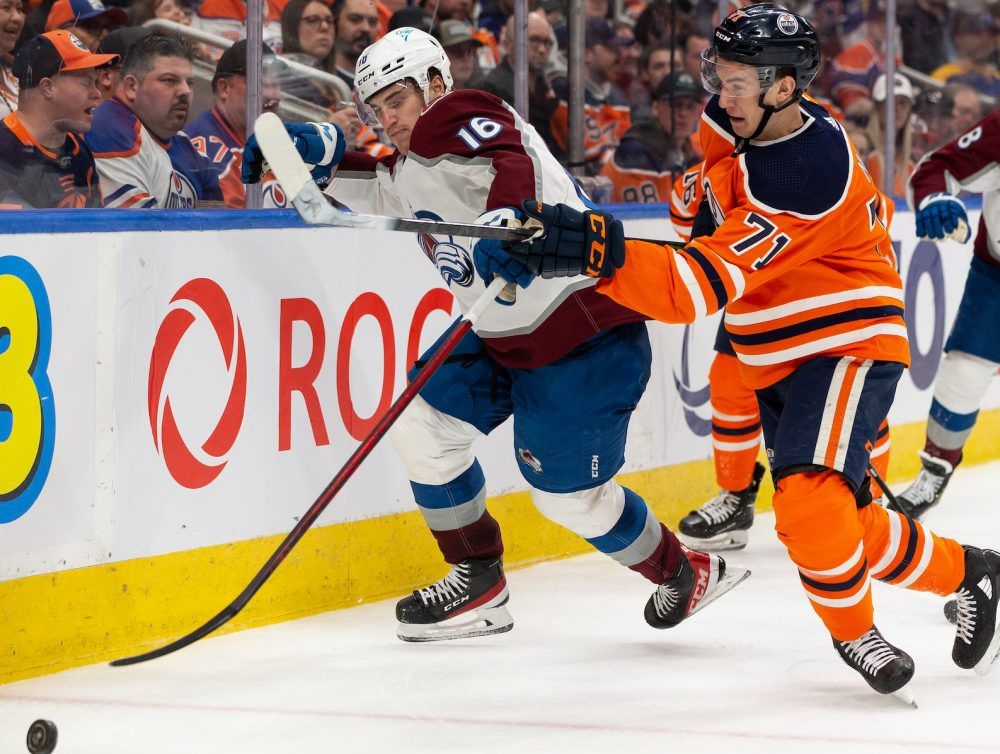 In the past couple of seasons as the NHL playoffs have reached the final four with the Edmonton Oilers long since eliminated from contention, one way we filled the content void was by looking in depth at the rosters of those NHL teams still in the hunt. How were those teams constructed? What had they done right that the Oilers had not?

After a near duplication of the final four in 2021 (only Montreal instead of Dallas was different), there is an infusion of new contenders in 2022. The only returnees are the two-time defending champs Tampa Bay Lightning, give or take Corey Perry who makes his third straight final four appearance with three different clubs, this time with the Bolts themselves. Their opponents are yet to be determined, pending the outcome of Monday night’s Game 7 between Carolina Hurricanes and New York Rangers, last in the conference finals in 2019 and 2015 respectively.

Out here in the West blow the winds of change. It seems like the Colorado Avalanche have been knocking at the door for some time now, but after a few second-round stumbles this is their first trip to the WCF since way back in 2002. Their opponents? None other than your Edmonton Oilers.

So much more satisfying to compare the Oilers to other contenders this time around, rather than as an also-ran whose roster construction inevitably falls short compared to the big boys. This year for a very pleasant change we can contrast the make-up of the Oil and the Avs in giddy anticipation of an imminent on-ice showdown between the two.

We’ll stick to the format established in prior editions, starting with the draft and then examining other avenues of player acquisition. In each section players will be listed in the chronological order they were acquired. We will consider just the 23 players for each team who have seen game action in the playoffs, with forwards listed in red font, defencemen blue, goalies green.

This being the playoffs where the salary cap no longer applies, no consideration will be given to cap management, other than to mention in passing here that the Oilers carried over $4 million in dead cap in 2021-22, the Avalanche $0.

Lots of star power on  both teams, in keeping with the consistently high draft position both enjoyed throughout much of the 2010s. That includes 2011 when the two squads were bottom of the barrel and picked 1-2, with each acquiring a core piece that remains with the club to this day in #1 Ryan Nugent-Hopkins for the Oilers and #2 Gabriel Landeskog, now captain of the Avalanche. The two teenagers engaged in a memorable Calder Trophy race as teenagers the following season. Now both are grizzled (?) 11-year vets.

Both teams subsequently acquired a franchise player with a first overall selection, the Avs nabbing Nathan MacKinnon in 2013 and the Oilers Connor McDavid 2 years later. Each team currently includes 4 players selected in the top 4 of the draft, including superstars Leon Draisaitl drafted #3 by the Oilers in 2014 and Cale Makar at #4 by Colorado in 2017. Both teams added a core piece or two a little lower in the top 10, with Darnell Nurse joining Edmonton’s blueline at #7 in 2013 and Evan Bouchard doing the same at #10 in 2018, while high-scoring Mikko Rantanen was nabbed by the Avs at #10 in 2015. More recent first-round talent such as 2019 picks Philip Broberg and Alex Newhook are bubbling under and are just getting their feet wet at this point.

Here’s the first surprise. In past comparisons, the Oilers routinely came out a distant second in this section, as most contenders have found some good supporting-cast type players on Day Two of the draft. Or even more than that in the case of the Lightning who flat out stole the likes of Nikita Kucherov, Brayden Point, Anthony Cirelli, Alex Killorn, Ondrej Palat and the beat goes on da-da-dum, da-dum, da-da…

But the Avalanche have a poor record in this aspect. The current edition of the club has not a single player they themselves drafted beyond the first round, indeed the top half of the first round. Nor did they harvest a few decent assets that they later used as trade assets. Indeed, in the entirety of the 2010s, the Avs drafted just one player on Day Two of the draft who has played as many as 120 NHL games: a college player, Wil Butcher, who wound up not coming to terms with the Avs and signing elsewhere.

A most unexpected void suit for a contending team, and further proof that there exist many different ways to build one.

The Oilers have had a modest harvest of their own from Day Two, one in need of replensihment this year after the club said goodbye to three later-round hits in Jujhar Khaira, Caleb Jones and Ethan Bear. Into the breach stepped 2018 second-rounder Ryan McLeod who has enjoyed a fine rookie season and looks set to be a contributor for years to come.

This area is the poor cousin of the later draft picks, consisting as it does mostly of players who weren’t picked at all, with an occasional player who was drafted but not signed by another club. The Avs picked up a couple of useful depth players by this route including back-up netminder Pavel Francouz from Europe and forward Logan O’Connor as an undrafted college free agent.

As recently as last season the Oilers had several players they had signed from Europe such as Patrick Russell, Gaeten Haas and Joakim Nygard. Each of them signed at least one extension in Edmonton, but all three experiments came to an end last summer and the trio all returned from whence they came.

The UFA route has been a major pipeline for the Oilers and the source of some 40% of their playoff roster. Among them, major contributors like Mike Smith, Tyson Barrie, Cody Ceci, Zach Hyman, and Evander Kane. Some of those guys came at premium prices on the first day of free agency, although there is a bargain or two to be found on that list.

The Avs found one significant player when they signed Valeri Nichushkin, a younger free agent who had  not been qualified by the Stars in the summer of 2019. The other two are long-in-the-tooth vets playing depth roles, although it’s hard to overlook Darren Helm’s series-winning goal in the dying seconds of Game 6 vs. the St. Louis Blues.

Another crafty manoeuvre by Avs GM Joe Sakic was the acquisition of Nicolas Aube-Kubel via the waiver wire. Not often does one see a top club roll the dice on a waived player from an also-ran like Philadelphia, but it’s pretty clear Sakic knew exactly what he was doing, or at least guessed right. Kube-Aubel found a niche playing just 10 minutes a night with the Avs, almost all of it at even strength. He posted double digits in goals, assists, and plus, while averaging over 1.0 goals and 2.0 points per 60 minutes of 5v5 play. What a steal.

The Oilers have dabbled in this market over the years but have no keepers to show for it.

At last we come to Sakic’s wheelhouse, the trade market. Nearly half of Colorado’s playoff roster (11 of 23) have come to the team through this time-honoured route. Only d-man Erik Johnson, acquired way back in 2011, predates Burnaby Joe’s time in the GM’s chair. The list includes some key pieces including two-way star Nazem Kadri, first-pairing d-man Devon Toews, and oh yeah, starting goalie Darcy Kuemper.

The feather in Sakic’s cap is probably the three-way deal that saw Matt Duchene head out of town, landing 7 assets in return including (injured) defenceman Samuel Girard and the draft pick who became Bowen Byram. Sakic’s patience was the stuff of legend, and the deal went a long way toward rebuilding the Colorado d-corps into the highly skilled and mobile crew it is today. Stealing Toews from the Islanders was another crucial step in this direction.

Sakic really went to town at this season’s deadline, acquiring no fewer than 4 proven NHL vets at generally reasonable prices not to mention cap hits.

Ken Holland has done some serious business in this area as well, notably the acquisition of “greybeard” Duncan Keith in a controversial deal with Chicago last off-season. The jury remains out on that one as Keith is praised in some corners, panned in others. (This is, after all, Oil Country.)

Holland did acquire a nice piece at the deadline in the form of defenceman Brett Kulak who has brought stability if not serenity to the previously problematic spot of 3LD. His other deadline bet, forward Derick Brassard, has made almost no impact and indeed has played just 8 minutes in the post-season.

Putting all those pieces together, this list of the full 23-man rosters reflects Edmonton’s predilection for the open market, Colorado’s reliance on trade routes as their preferred methods for acquiring veteran players. But make no mistake, the true power of both clubs came through the upper echelons of the draft.

STAPLES: Right side fever pushing the Oilers deep into playoffs

McCURDY: Turns out Oilers have more than One Guy