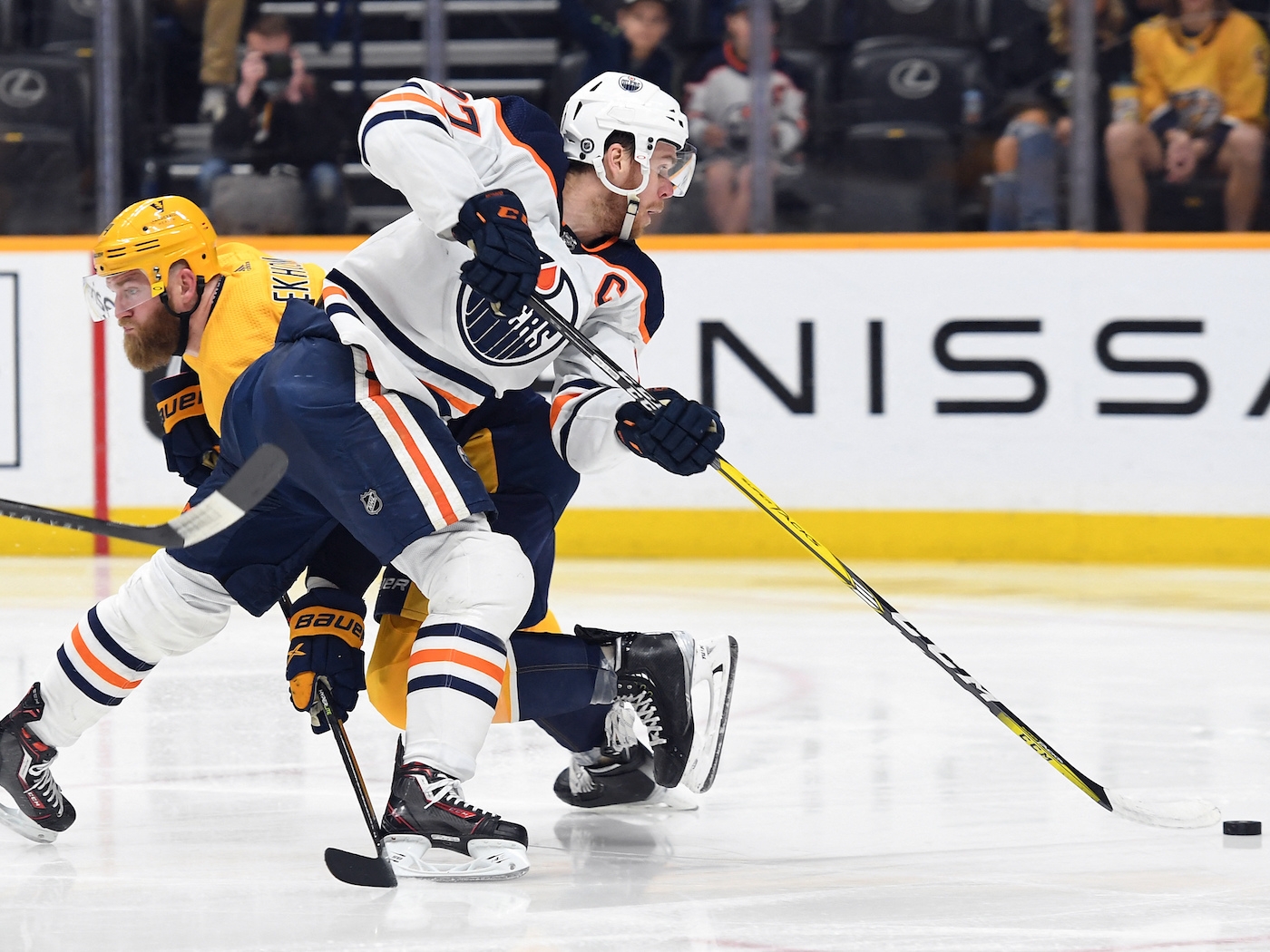 NASHVILLE — The Edmonton Oilers should get their butts kicked more often.

OK, maybe that’s not the best strategy heading into the playoffs, but there’s no question they play some of their best hockey after playing some of their worst hockey.

They won six in a row after getting blown out 9-5 in Calgary late last month and looked dominant again in their first game back from Tuesday’s 5-1 drubbing in Minnesota.

The Oilers were in total control from start to finish Thursday evening in Nashville, with Leon Draisaitl scoring his 52nd, 53rd and 54th goals of the season and Mike Smith stopping 30 shots in a 4-0 triumph at Bridgestone Arena.

“Not our best in Minnesota, but good teams make sure they respond and we are a good team,” said Draisaltl.

“I thought we responded really well tonight. It was a full 60 minutes and every facet of the game was checked off.”

The Predators are also good team with a great home record (23-12-0) and a lot to play for and the Oilers walked right through them. It was a clinical victory on all fronts, none of which came as a surprise to Smith, who wasn’t at all worried about his his team was trending after what happened in Minnesota.

“We wanted to bounce back and have a better effort and it was as complete an effort as you can have against a really good hockey team in their building,” he said.

“The guys had a good start to the game, got up in the first, and carried the momentum through the whole 60. It was good to see.”

Teams usually have to weather a first period storm when they visit Bridgestone Arena, but it was Edmonton that did all of the early storming. They put up eight shots in the first six minutes, drew a penalty and made it 1-0 on Draisaitl’s one-timer at 8:56 — good news for a team that came in with a 25-2-1 record when scoring first.

By the 12-minute mark of the opening period the shots were 12-2 Edmonton and by the first intermission Nashville was very lucky to be down by just one goal.

Their luck ran out midway through the second period, though, when Draisaitl’s second of the night, courtesy of Zach Hyman’s coast to coast legwork to set up another one-timer, gave Edmonton a 2-0 lead.

“I think we came at this team in waves tonight,” said Oilers head coach Jay Woodcroft. “We knew that in order for us to walk away with two points we needed everybody firing on all cylinders. We skated well and asserted what we wanted to do against them.”

Nashville’s best chance to change the momentum and launch a comeback came when Connor McDavid took two for roughing with a head hit on former teammate Matt Benning. But before the Predators could get anything done, Darnell Nurse scored a shorthanded goal to make it 3-0 and pretty much close the book on the evening.

The third period push came as expected, with Nashville in full attack mode, but Smith continued frustrating them at every turn for his 43rd career shutout.

“He battles, that’s his thing,” said Draisaitl. “He plays the puck better than a lot of players do and he battles. It’s great to see him rewarded with a shutout.”

Smith’s win was his fifth in a row and improved his record to 7-1-1 in his last nine. He was buried and left for dead earlier this season, but he’s feeling it now.

“It’s not how you start, it’s how you finish,” he said. “I’m not really worried about what’s in the past. It’s been a different season but all you can control is your next game and I feel really focused on that. I feel good in the net and that’s all that counts at this time of year.”

Draisaitl completed the hat-trick on another power play at 11:09 of the third period. He had four goals that time he played here and 19 goals in 20 career games against the Preds.

“It’s even more impressive that he can do it with the stick that he’s using,” laughed Smith. “If anyone saw the paddle he’s using, it’s like he could be flipping pancakes with that thing and then he’s going out and scoring 54. He’s a special talent.”

LATE HITS — Woodcroft went with 11 forwards and seven defenceman, getting Kris Russell into his first game since March 22nd. Russell, who’s been hamstrung by injuries this season, has only played five games out of Edmonton’s last 34. But he marked his first shift of the game by crushing Mikael Granlund with an open-ice hit … Nashville made it interesting for a few seconds with a 3-1 goal 3:45 into the third, but another successful offside challenge took it off the board and preserved the shutout… Zach Hyman padded his career high totals with a 50th point