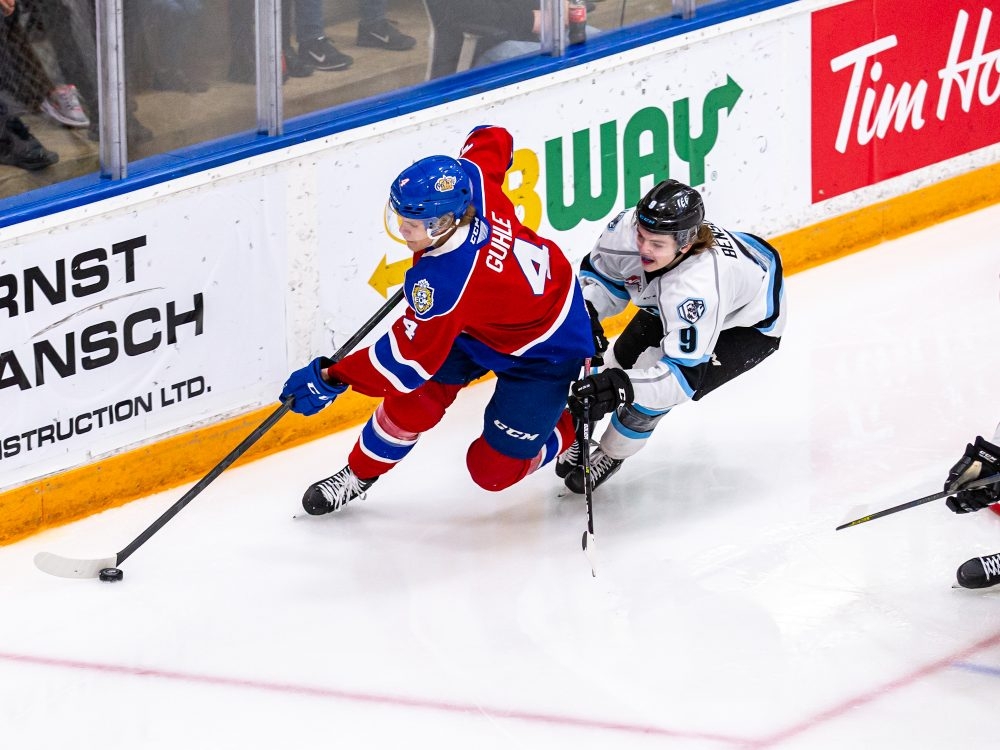 Fifteen hours, one way, is a long time to spend on a bus and the Edmonton Oil Kings were hoping to improve their odds of not having to make the trip back to face the Winnipeg ICE in the WHL Eastern Conference Final after winning the opening game of the series in overtime Friday.

Yet, the possibility of a return trip increased somewhat Saturday after the ICE bounced back to take Game 2 with a convincing 5-1 victory on the strength of a hat-trick from forward Mikey Milne.

The ICE victory evened the best-of-seven series 1-1 with the next three games scheduled to take place in Edmonton starting Monday at Rogers Place.

The Oil Kings can still avoid heading back to Winnipeg, but will now have to sweep the three games at home in the 2-3-2 format. If necessary, both Game 6 and 7 will take place at the Wayne Fleming Arena in Winnipeg.

The loss was the first for the Oil Kings in the playoffs, having won nine consecutive games to start the post-season with sweeps against the Lethbridge Hurricanes and Red Deer Rebels, before winning Game 1 against the ICE.

Owen Pederson and Maximilian Streule also scored for the ICE, while goaltender Gage Alexander made 35 saves in his first start since March 5, due to injury.

The turning point of the contest came two minutes into the third period when Oil Kings forward Jaxsen Wiebe was assessed a five-minute major for a hit to the head on Streule. The ICE went on to score two goals during the man advantage to take a 3-1 lead.

Milne opened the scoring halfway through the first period with his 11th goal of the playoffs. The 19-year-old forward tipped a pass from Benjamin Zloty in the slot over the glove of Cossa.

Dowhaniuk tied it 1-1 with 1:15 left in the period on the power play. His point shot sifted through traffic, past Jalen Luypen in front and in by Alexander, who got the start in favour of Daniel Hauser for the ICE. Hauser let in four goals on 21 shots in Game 1 before being replaced by Alexander, who made 18 saves prior to giving the overtime goal away to Tyler Horstmann.

Neither team could find the net in the second period, but the ICE did suffer a big loss as scoring sensation Matthew Savoie, a St. Albert product, had to leave the contest with just over three minutes left after taking a hit from Justin Sourdif along the boards.

Sourdif lined up Savoie and rubbed him out, but the two ran into linesman Tarrington Wyonzek at the blue line. Savoie went down hard on the play after colliding with Wyonzek, and had to leave the contest, while Sourdif skated away unscathed.

Early in the third, Wiebe was assessed his major attempting to finish a check on Streule along the boards.

The ICE took advantage as Pederson scored 1:15 into the extended power play to put the ICE ahead. He picked up a loose puck in the slot after Connor McClennon’s shot was blocked in front and slid it past Cossa.

Milne then scored to make it 3-1 at 6:20, stick-handling his way to the front of the net before plowing into Cossa as the puck slid underneath the goaltender. After a review, the goal stood even though Milne did get a goaltender interference on the play.

The Oil Kings tried to mount a comeback, but were unable to beat Alexander, an Anaheim Ducks prospect who was selected in the fifth round — 148th overall — of the 2021 NHL Entry Draft.

Milne went on to score his hat-trick goal into an empty net with 1:36 left after intercepting a cross-ice pass just inside the ICE blue line and taking the puck back the other way.

Streule added a fifth with 43 seconds left in the game taking a pass at the bottom of the right face-off circle and muscling a shot through Cossa.