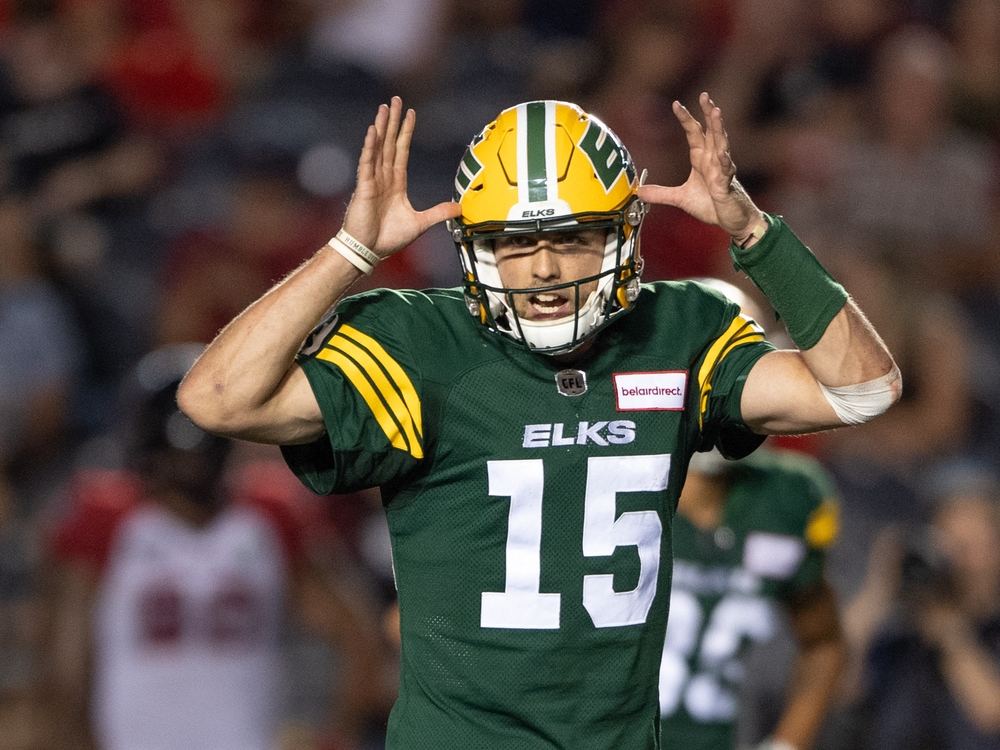 If the Edmonton Elks could find a way to bottle the second half of their 30-12 road win over the Ottawa Redblacks last week, you could bet the farm they’d be chugging it down in the locker-room ahead of Saturday’s rematch inside Commonwealth Stadium.

After all, you’d have to go back to pre-COVID-19 to find the last time Edmonton scored touchdowns on three consecutive drives.

Four-yard touchdown catches by Greg Ellingson and Ricky Collins Jr. bookended a one-yard QB keeper into the end zone by Trevor Harris as the Elks scored majors on their first three drives of a 41-26 win on the road against the Toronto Argonauts on Aug. 16, 2019.

On Saturday, the Elks repeated the feat, this time to open the second half with an 18-yard touchdown reception by Kenny Lawler, followed by a two-yard TD rush by running back Ante Litre and a four-yard catch by Derel Walker in the end zone before marking his first touchdown since rejoining Edmonton last season by heaving the ball high into the air.

“It was awesome. Just to see the excitement on his face after getting that little monkey off his back, so to say, it was nice,” said Elks quarterback Taylor Cornelius. “He even joked about it afterward, he said he looked at it and said he hoped he got it as high as the goalpost.”

As for bottling that second-half magic, you can bet they’d pull the rabbit from the hat on the opening kickoff this week. Especially after an opening 30 minutes that was anything but memorable on the way to trailing the Redblacks 12-9.

“I hope so,” said Cornelius, who completed just three of 10 first-half passes before going 13 of 17 in the second. “We had some time to kind of look back on it, there were definitely things in the first half that we could have hit on, that we missed, to stay on the field and keep the defence off and just extend drives.”

They don’t get much more extended than the 15-play, 80-yard drive ending in Walker’s long-awaited touchdown, which took an incredible 8:40 from start to finish.

“As a team and an offensive unit, we try to pride ourselves on having those extended drives, marching the ball downfield and then taking the shots when we can,” Cornelius said. “Obviously, we dialed up some double moves to D-Walk. Then getting into second-and-long when some of those didn’t convert, and Manny (Arceneaux) got one over the middle.

“It’s huge. It’s a confidence-boost. It wears the defence out and then it gives our defence a whole lot of time to rest. Coach (and general manager Chris) Jones said, ‘I can be the best defensive co-ordinator in the league when y’all guys do that on the field.’”

While he will never say no to a win, Jones said he could have done without the teeter-totter part of his team’s performance.

“If we could get rid of the first half and just play like the second half for the rest of the year, we’d be in a pretty good spot,” he said.

The number of quarterbacks to appear on an Elks roster since Jones took over the team in the off-season has climbed to 12.

“He was with us in Sask., some, we have familiarity,” said Jones, head coach and general manager of the Roughriders from 2016-18. He’s been player of the year down in the indoor league and a friend of mine is down there. He kind of reminded us (Powell) was down there.”

And with rookie starting quarterback Tre Ford (collarbone) on the six-game injured list, the Elks are taking a flyer on Powell.

“And he’s working hard to get back.”

In and out: Newly signed WR Jalin Marshall didn’t make it out of his first practice since rejoining the squad Tuesday, having been sidelined by a knee injury midway through the on-field session. The five-foot-10, 200-pound Ohio State product suited up with the Elks in their 2022 season debut before being released … SB Manny Arceneaux has been put on the six-game injured list after leaving Saturday’s game with a high-ankle sprain … C David Beard (illness) has returned to active duty after sitting out Saturday’s game, along with DL Keisean Lucier-South (ankle) … LT Tony Washington did not practise, after being taken out of the game in Ottawa by a neck injury … OL Justin Renfrow has been released.