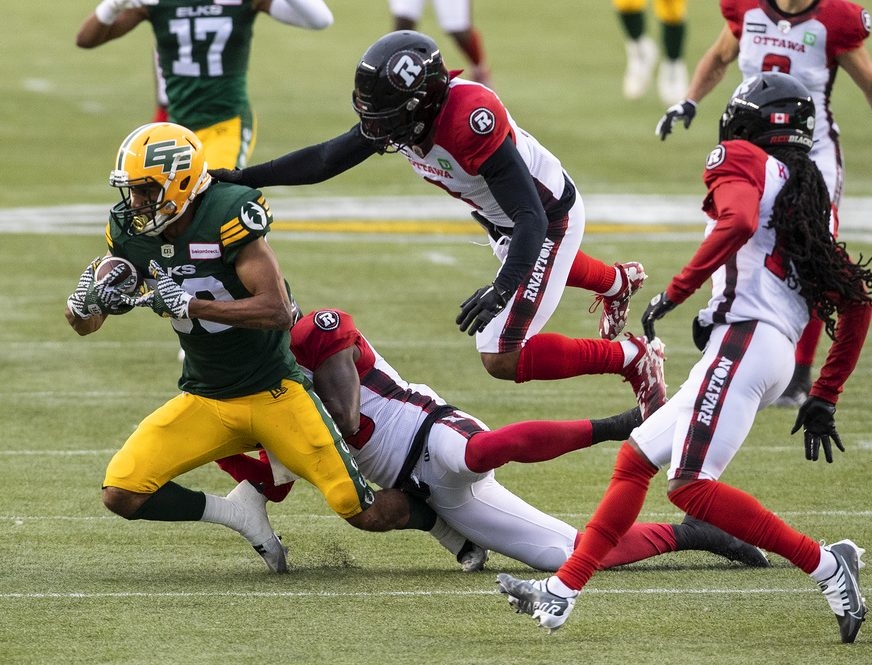 Nick Arbuckle had every reason to put together the game of his life Saturday.

Back in Commonwealth Stadium facing an Edmonton Elks squad he started the first three games of the season with, he was finally given the keys to the Ottawa Redblacks offence for start No. 4 of his season.

Not good enough for this town, the third-year pivot showed the Elks just how wrong the decision he thought it was to trade him for a fourth-round draft pick back in July, leading the Redblacks to a 25-18 win.

“It’s an added motivation,” Arbuckle said. “There is always motivation as a competitor to go get wins. But have the opportunity to get that first start, you want to get the win for the team because I know that they needed it.

“But when you are out there against your brothers, your siblings, your family, you want to win.”

While Ottawa improved to 2-8 at the bottom of the East Division, the Elks are now 3-8 and have dropped their last 13 straight home games — one off the dubious league record of 14 straight by the 1988 Ottawa Rough Riders — as both sides won in each other’s stadium in a home-and-away series that began with a 30-12 Edmonton win a week ago.

“I don’t know, it’s crazy,” Elks corner back Nafees Lyon said of their home struggles. “You should be winning your home games but just, right now, it’s not working out that way.

“But we’ve just got to get back in the film room and learn from these mistakes.”

Three of Edmonton’s final seven regular-season games are at home, with another back-to-back coming up right away in the annual Labour Day Series.

Ottawa, meanwhile, has their own home woes to worry about, having won at TD Place Stadium just once in their last 20 tries.

Arbuckle completed 21 of 32 passes for 219 yards and ran for one touchdown, while Taylor Cornelius passed just 14 of 37 attempts for 287 yards and an interception.

“Guys are, I mean, it’s safe to say they’re pissed off,” Cornelius said. “And we knew we needed that one but we’re going to come back, have a couple days off here and then come back and watch the film and figure out what we need to correct.”

Kenny Lawler led the way with 146 yards on just three catches for the Elks, while former Edmonton draft pick Nate Behar earned 101 yards on four receptions for the visitors.

After half a quarter of feeling out by both sides, despite facing each other one week earlier, Cornelius hit a diving Lawler for a 53-yard connection to set up a 32-yard field goal by Sergio Castillo to put the Elks on the board first.

Arbuckle took it as a cue to go deep himself, hitting Behar 49 yards downfield before setting up in the red zone with a 24-yard toss to Darvin Adams and finishing off the drive himself with a one-yard sneak.

That gave the visitors a 6-3 lead heading into the second quarter, after Lewis Ward’s season struggles continued with a miss, wide right, on the point after.

But they earned all seven points on their next touchdown, a two-yard QB keeper by backup Caleb Evans to cap a 10-play, 74-yard drive as Ottawa extended their lead to double digits.

Evans got in on the next series too, coming in for short-yardage only to hit a dashing Behar for a 33-yard gain instead, reaching Edmonton’s 22 yard-line. The receiver then caught a 19-yard pass, fumbling it at the goal-line before it was recovered by Redblacks centre Darius Ciraco.

That led to a one-yard keeper into the end zone by Evans, finishing a seven-play, 64-yard drive that wouldn’t let on was manufactured by the worst team in the league, as the Redblacks went ahead 20-3 with a third unanswered major of the half.

It’s the same thing Edmonton did to them in Ottawa a week ago, with touchdowns on three consecutive drives to open the second half.
Saturday’s first half ended with a 27-yard field-goal attempt by Castillo blocked by Davon Coleman.

“They controlled the football, I’ve got to do a better job of getting these guys ready to play,” said Jones. “We still have not put together four quarters yet. We came back out in the second half and played better football, but played just good enough to end up losing the football game.

“And that’s not acceptable.”

The Elks finally found the end zone midway through the third quarter, with Cornelius strutting in from four yards out a quick five-play drive that began in Ottawa territory, cutting Ottawa’s lead in half, 20-10.

But they would turn right around and concede a safety at the other end of the field to put Ottawa ahead by 12 going into the final quarter, where Ward hit a 28-yard field goal to go ahead 25-10.

On third-and-two in Ottawa territory, short-yardage quarterback Kai Locksley dashed for a 21-yard gain, taking advantage of the Redblacks only lining up 11 players. That set up the Elks on the doorstep, where Cornelius punched it in from one yard out before a two-point conversion closed the gap to seven points with 4:44 to go.

Facing third-and-10 with two minutes remaining, Edmonton’s comeback bid fell short when Cornelius got caught short of the chains on a scramble the Redblacks had to be expecting to end one drive, and turned the ball over on downs on another with Lawler sidelined with what looked like a leg injury.

“He should be fine. He got hurt in that monster-big quarterback sneak situation,” Jones said. “He got rolled up a little bit.”