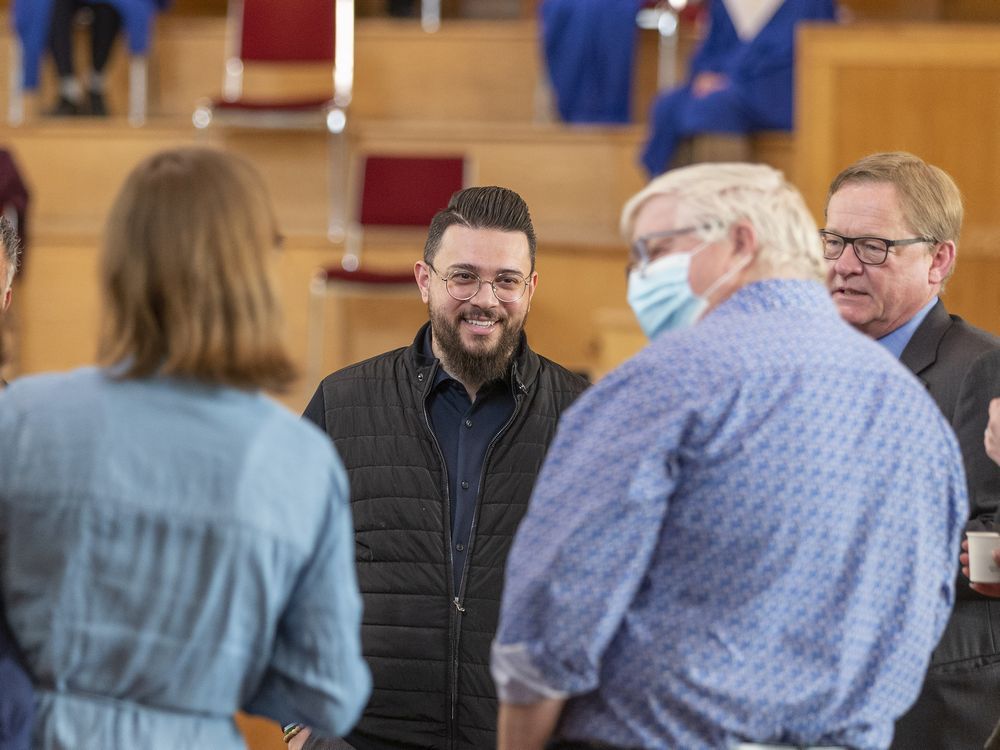 Edmontonians of Christian and Muslim faith have been sharing space at McDougall United Church since the beginning of April and for the first time, both faith groups held services simultaneously Friday afternoon.

Yasin Cetin, outreach and engagement advisor with the Muslim Association of Canada (MAC) Edmonton Chapter, said the church approached them in February about “revisioning” their community space as a multi-faith community hub. The MAC rented space at the downtown church for Ramadan, which runs through the month of April.

“It’s actually really interesting because this Ramadan has been an opportunity for us to sort of experiment, work out the kinks, see what spaces work, what spaces don’t work and we’re in talks with McDougall right now about what a long-term partnership looks like,” said Cetin.

Cetin said he sees dozens of new faces every day and estimates a few hundred Muslim people have come through the doors since services began at the church at the beginning of the month.

“I think it’s especially special for us in the Muslim community recognizing that we’ve been in the Prairies on Treaty Six for over 150 years to share space with a church that was built in 1911 that’s been here for just as long, I think shows the camaraderie, the pluralism, the ability to connect over faith and foster a sense of community in a space that’s been home to many faiths for a long time,” said Cetin.

Erum Afsar attended the Muslim service with her two daughters on Friday and said it demonstrates that people of Christian and Muslim faith have more in common than they do differences.

“It’s a special day for those of the Christian faith, it’s Good Friday and for Muslims, Friday is a gathering day as well. So, it’s just great that I’m at this day, which is special to both communities and that we’re able to share space and celebrate and to worship in our own ways, but together as well,” said Asfar.

Friday was her first service at the downtown church, but Asfar said she works in the downtown core and would likely attend more services if the partnership was extended. She added with people returning to work, it is a convenient place to gather.

“Hopefully moving forward we don’t remain isolated and separate (as we were during the pandemic) and that we start to rebuild and reform some of those bonds of community and really take it in an aspect of community building, collaboration and strengthening those ties,” said Asfar.

MaryAnn Pastuck, minister at McDougall United Church, said she is hoping they will be able to continue conversations and communications to have the partnership develop into something more long-term.

“I think it’s exciting that Christian faith and the Muslim faith can be in the same building, worshipping at the same time and honouring each other’s time and space and worship practices to be able to nurture and to grow our faith,” said Pastuck.

She said the “visioning” process began in 2019 where talks about the possibility of creating the McDougall into a church or community hub. With support from Trinity Centres Foundation, MAC and McDougall are collaborating to restore and redevelop the church — something that Pastuck said is needed.