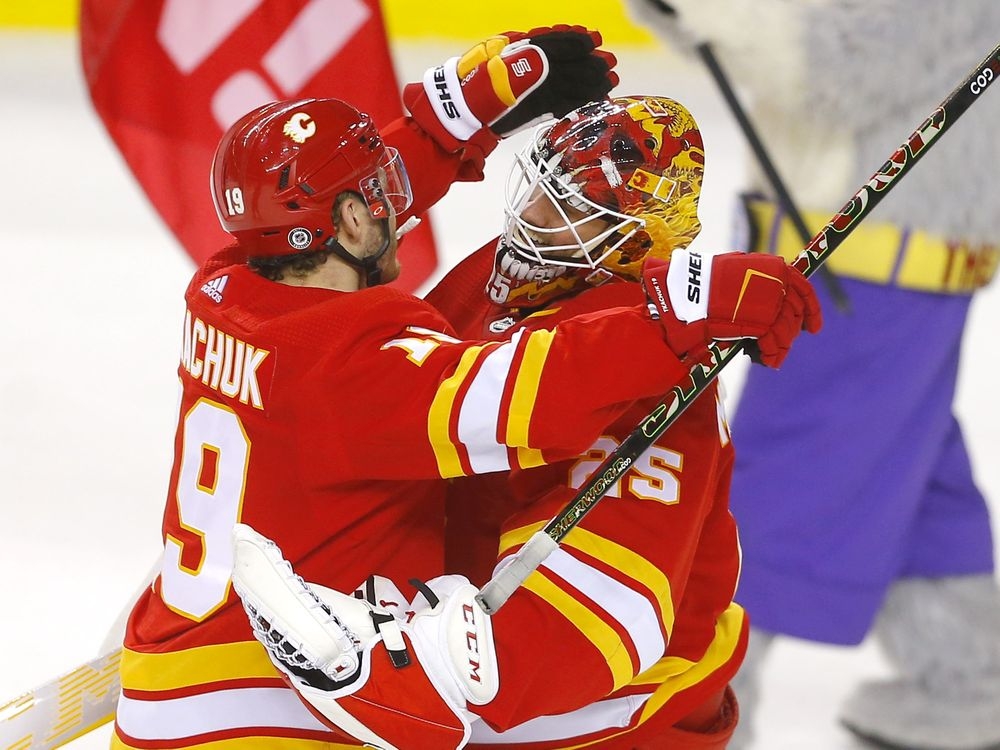 On the eve of the Calgary Flames’ playoff opener, Darryl Sutter didn’t downplay his own anticipation.

“Yeah, I’ve been kind of waiting for it for a while,” he said, even allowing a slight smile. “It’s why you play, right?”

And why you coach, too.

Sutter has already waited six years. It has been that long since the now-unretired skipper was last standing behind the bench in the Stanley Cup playoffs.

And come Tuesday, when the Flames open up a best-of-seven series against the Dallas Stars, he’ll be waiting another hour more than he was hoping for.

“I hate them 8 o’clock games,” Sutter told reporters after Monday’s practice at the Saddledome. “Just think, if you play at 8 o’clock tomorrow, you could still be playing at midnight. You could play tomorrow and the next day.”

This fan-base, collectively known as the C of Red, has also been waiting a long while for this one.

Since they were forced to watch from home during the Flames’ last post-season appearance, a bubbled battle with these same Stars in 2020.

Since Sutter spoke of “unfinished business” when he was hired last March for his second stint as the head coach in Cowtown.

Since it became clear that this resurgent squad would not only qualify for the 2022 Stanley Cup playoffs but enter as the top seed in the NHL’s Pacific Division.

The Flames collected 50 wins for just the third time in franchise history. The counter resets now as they welcome the Stars — the first wildcard in the Western Conference — for Tuesday’s Game 1 (8 p.m. MT, CBC/Sportsnet, Sportsnet 960 The Fan).

“We’re excited. It’s a lot of work throughout the whole year to get here,” said superstar winger Johnny Gaudreau. “It’s hard to get to the playoffs. I’ve only done it a few times in my career. So to be back here with a good group in our locker-room like we have, it’s pretty special. Hopefully, worry about one game at time and do something cool here.”

That one-at-a-time mantra comes from their all-business bench boss.

Even as Gaudreau and fellow first-liner Matthew Tkachuk were piling up 100-plus points, as Jacob Markstrom was piling up shutouts, as the accolades were piling up for a team that many experts are picking to sip from the Stanley Cup, Sutter has been grinding the brake on the hype train.

On Monday, the Jolly Rancher suggested that if the Stars were in the Pacific Division, they might have won it. No smile then.

“You’re not a proven playoff team until you make it several years in a row and then you have some success,” said the 63-year-old Sutter, who led the Los Angeles Kings to a pair of titles in 2012 and 2014. “If you look at the history of champions, that’s what they are. We’re all excited because we made the playoffs. Now, you try to take the next step — you try to win a game.

“You can’t win four in one. You’ve gotta win one,” he added later. “That’s pretty much the message. It’s not like we snuck in or we got in on the last day. We’ve been preparing for our opponent, whoever it would be, for quite some time. So now you just don’t overkill it. We just have to go play.”

Finally, the wait is almost over.

When would the excitement hit for the Flames?

“Probably tonight, getting ready to go to bed and you know you have a game tomorrow — and a lot different a game than the regular season,” Gaudreau said after Monday’s up-tempo practice. “I think tonight will be exciting.”

That doesn’t mean that Calgary’s go-to guys would be tossing and turning until the sun came up Tuesday.

“Oh, I fall asleep pretty quick,” said Markstrom, the stalwart goaltender, with a grin. “When my head is on the pillow, I’ll be out pretty quick. I don’t try to overthink stuff. I’ll have a great sleep.”

They’ll need to be well-rested.

Because with 82 games in the rearview mirror, now is when the fun really starts.

And because, as Sutter reminded, there is no guarantee this late start won’t turn into an early-morning overtime marathon.

“You can play all night, ’til someone scores the last goal, right?” Sutter said. “That tells you how much you need everybody in your locker-room.”