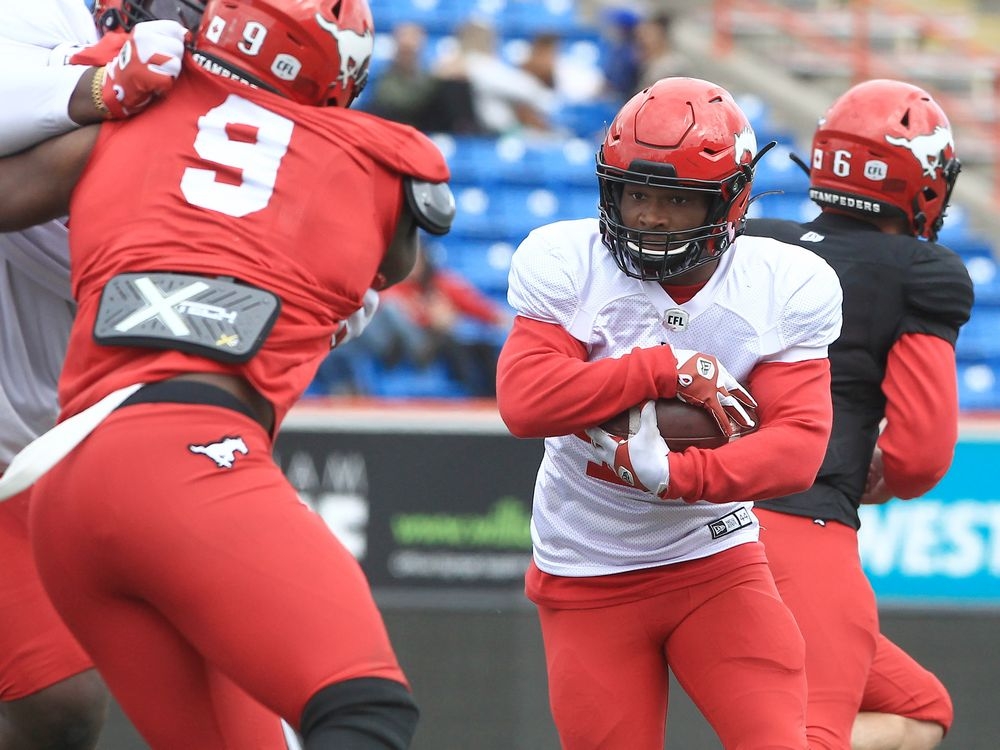 Saturday’s annual Red & White Game gave the Calgary Stampeders a live-action look at the talent they have in training camp.

Even if it is just a peek at what they might possess.

The truth is a deeper dive into the film from the scrimmage will offer a better breakdown for the coaching staff.

But there were still a few pros — and cons — to take from the afternoon at McMahon Stadium.

“I thought it was probably our highest-paced scrimmage we’ve had in the last three or four years,” said Stampeders head coach Dave Dickenson. “And I think the guys responded with a good effort.

“I thought where I was looking for plays and looking for the battles, I think they’re still there.”

The guy coming away with the biggest plays was defensive back Dionté Ruffin, who walked out of the scrimmage with the WWE belt for having picked off superstar quarterback Bo Levi Mitchell.

And he did it twice.

“I liked the first one, because they didn’t think I was going to be there,” said the former secondary star of the NCAA’s Western Kentucky Hilltoppers. “And the second one was off a tip. It is what it is — right place at the right time.

“If you get an interception on Bo, you get to wear the belt,” continued the 23-year-old Louisiana native, who stands 5-foot-10, 177 lb. “Bo’s big-time first-ballot hall-of-famer, so I guess I fit the description today. It meant a lot coming from Bo. Bo, I appreciate you, man, to the moon and back. It means a lot — it does.”

Given what’s pretty heady competition at defensive back — including a push from former Florida State Seminoles’ NCAA standout Javien Elliott — it could well mean a spot on the roster for Ruffin.

“It’s going very well — I’ve adjusted very fast,” Ruffin said. “I talked to the coaches before camp started, and I got deeper and deeper into the playbook. So when I got here, I was just able to play and have fun. I came out here to do what I do every day, and it just paid off.”

“Good cover guy,” said Dickenson of Ruffin. “Now for him, is it can you tackle? Can you play special teams? But he made a good impression, no doubt. We’ve seen all camp that he is one of our better cover guys. Now we’ve gotta see if he can take that next step, and I expect him to do that.”

“I love our secondary right now, and I’m not sure who’s going to be playing,” said the head coach. “But you saw some real playmakers there, and we were looking for guys, and I definitely found that.

“And I would say the d-line (stood out). To me, that’s a position where there are some really tight battles.”

Another war is in the works to back-up lead rusher Ka’Deem Carey.

With plenty of running backs of the same stature and style in camp, the smallest stood out Saturday in Peyton Logan.

The 5-foot-8, 189-lb. runner out of the NCAA’s Tennessee-Martin Skyhawks dashed his way to a solid scrimmage.

“Size ain’t never been a problem for me,” said the 23-year-old Logan. “I come with relentless effort every time. I’m going to be the biggest dog on the field.

“I think it went really well, for my first time being out here,” continued the Memphis native. “I didn’t know the plays very much, but I’m the type of person that gets into my playbook a lot, so once I got into my playbook and understood the plays, it came natural to me. It was like I was in college again.”

“As a coach, I saw a lot of good things — I always like to stay positive,” Dickenson said. “I saw a lot of skill and playmakers. Good battles in camp. And I told the guys that I feel like we’re really invested because the jobs are open and the competition is there.”

“I thought (the scrimmage) was a little herky-jerky with a lot of penalties,” Dickenson said. “I don’t know why I expect the quarterbacks to be sharper than they were on time-counts and getting in and out of the huddle. I honestly think it’s pressure and trying to figure out where they are on the field. Ultimately, I felt like we didn’t have any flow. We jumped offside (too much) — our offensive line had three or four procedures. As a coach, you know you’re going to get beat if that happens. I didn’t see the defence taking penalties. I didn’t see the mental errors there.

“But I still saw a lot of plays on the offensive side of the ball,” continued Dickenson. “I thought more touchdowns were scored than maybe in past scrimmages. I just saw more mistakes with the offence.”

Dickenson knows, however, that can change when the live bullets start flying once they get into true game action.

“This was like a dress rehearsal for the pre-season,” Dickenson said. “We’re still in the process of trying to figure out how we’re going to work the pre-season games, both home and away. But I feel confident the guys will get the job done in that environment.”

After the one against the visiting Lions come the first major set of cuts, as per the CFL schedule.

“Ultimately, we’re going to have some tough decisions,” added Dickenson. “I have a feeling there might’ve been some guys who took a step back (Saturday). But I’ll let them play pre-season. I really believe for the most part I’m going to try and get most guys snaps. I’m not going to make that guarantee, though. If you can’t show me that you can execute your job, then I’m going to move on. That’s the bad part of the business.”