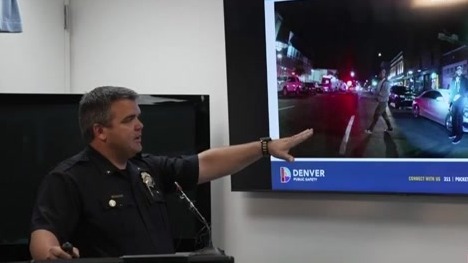 DENVER (KDVR) — The Denver Police Department shared its account after police officers opened fire in a downtown crowd over the weekend, wounding a suspect and six bystanders.

The shooting is one of three calls in the past week where officers shot at people involved. Police addressed all three during a news conference Wednesday, including the downtown shooting Sunday morning on Larimer Street near 20th Street.

Commander Matthew Clark said that officers were on patrol in the LoDo area as bars were let out for the night, which is normal procedure to help limit any violence and protect people in the area during the busy time.

Around 1:35 a.m., officers were notified of a fight that was happening. This was specifically referred to by Clark as a “physical altercation.” When the officers approached, Clark said the aggressor, later identified as 21-year-old Jordan Waddy, walked away toward a crowd on the sidewalk.

In an effort to talk to him, officers walked parallel to him in the street so they were not fighting through the crowds. Larimer Street was closed to vehicles because of the crowds while this was happening.

Clark said that at one point the man described as the aggressor, later identified as Waddy, walked into the street briefly but then after ignoring commands from officers returned to the sidewalk and pulled a gun out from the pocket of his sweatshirt.

During the news conference, Clark showed several still images including one that showed Clark in the street with his hand appearing to be in his sweatshirt pocket. Clark said this was an indication to officers that he may have been carrying a gun.

When Waddy returned to the sidewalk, he removed the gun from his pocket, holding it by the barrel and moved it in a way that the muzzle pointed toward officers, according to Clark. A still image from body camera footage showed one officer on the street pointing his gun at Waddy as Clark said this was happening. From this angle on the street, there did not appear to be anyone behind Waddy.


These neighborhoods account for half of Denver’s violent crime

A second body camera angle was recorded from the sidewalk at the same time. An image from this appears to show Waddy holding the gun, and a crowd that was behind him from this angle, further down the sidewalk.

The officers did not make an announcement about their intent to shoot because, according to Clark, from the time that Waddy got back on the sidewalk to the time he removed the gun from his pocket and the officers shot him was about two seconds.

There is no evidence that Waddy fired the gun he was holding, but police say when they recovered it there was one bullet in the chamber with the hammer cocked and seven bullets in the magazine.

In addition to Waddy’s injuries caused by being shot by officers, six bystanders who were not involved were also injured. Clark said it is unclear at this time if the injuries were caused by bullets fired by the officers, shrapnel from the bullet impacts, or something else.

Clark said that all of these bystanders have since been released from the hospital. FOX31’s Lori Jane Gliha talked to two of these injured bystanders and the attorney they hired about what happened that night.

Waddy remains in the hospital with non-life-threatening injuries. Formal charges have not been announced, but he is being investigated for felony menacing and possession of a weapon by a previous offender.

According to Clark, the officers involved were unaware of Waddy’s status as a previous offender and were responding based on his involvement in the fight.

Who were the Denver police officers in the shooting?

All three officers who fired their weapons graduated from the Denver Police Academy in 2019 and, according to Clark, none had been involved in a prior shooting incident. Clark also said he had no reason to believe any of them had failed to keep up with the department’s required firearms training and testing.

Clark told reporters Wednesday that body camera footage shows the officers’ interactions with Waddy after the fight and through the shooting, but he has not seen video of the fight that started this incident.

Two of the officers involved activated their cameras immediately after the shooting, and because of how the cameras are designed they also have video recordings of the 30 seconds prior to activation – which includes the shooting. At least one officer had full activation of their camera with audio and video of the shooting. DPD has also reviewed video from city-owned cameras in the area, referred to as High Activity Location Observation or HALO cameras, and is working to get security footage from the businesses in the area.

In addition to the criminal investigation against Waddy, the Denver Police Department and a Critical Incident Response Team are reviewing the officers’ actions and the department’s policies to determine if the officers followed procedure and if changes are needed at a higher level.

“Six people additionally that shouldn’t have got injured got injured that night,” Clark said of the bystanders who were injured.