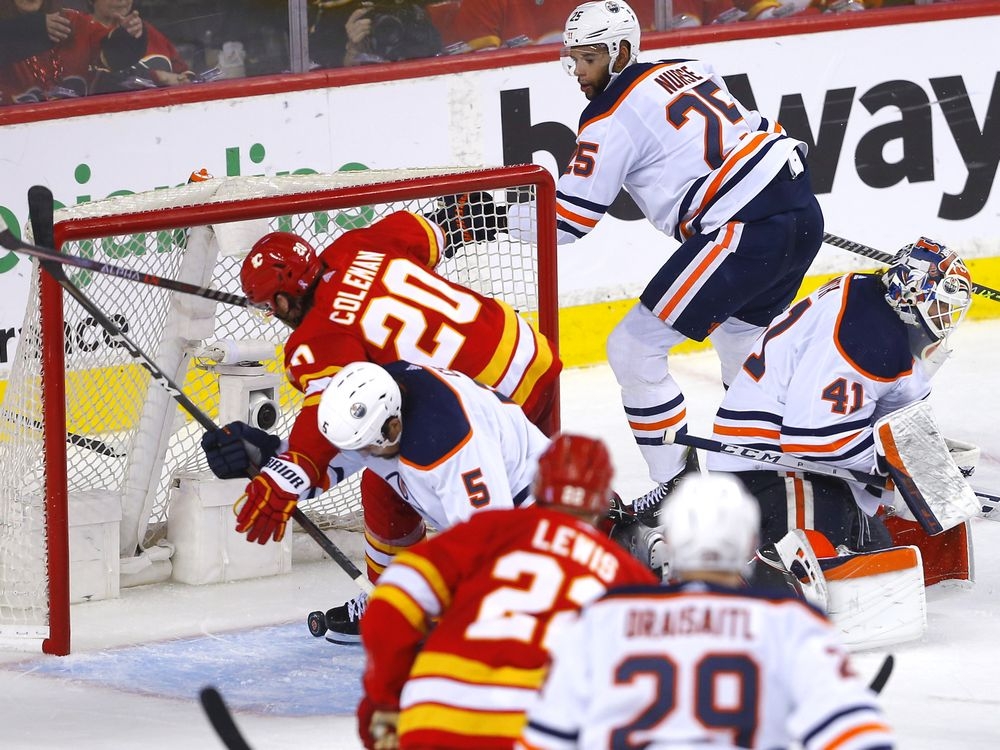 One controversial call didn’t cost the Calgary Flames the series.

Even the most hardened, die-hard Flames fan can see that.

The Edmonton Oilers’ superstars showed up in a major way during their long-awaited Battle of Alberta series against the Calgary Flames. By the end of Game 5, Connor McDavid had proven his standing as the best hockey player in the world and after a shaky Game 1, the Oilers were generally the better team.

Still, the Flames probably deserved a chance to keep on fighting.

The decision to disallow a late third-period Blake Coleman goal and keep Thursday’s game tied at 4-4 is going to be debated around Alberta for a long, long time.

There may never wind up being satisfactory answers for the Flames or their fans.

The NHL rulebook itself doesn’t provide much help, despite the relative simplicity of the rule in question.

“A goal cannot be scored by an attacking player who uses a distinct kicking motion to propel the puck into the net with his skate/foot,” Rule 49.2 of the NHL’s rulebook states.

It’s in the interpretation of that rule where things get complicated.

There are a couple things that are impossible to argue.

Does that constitute a ‘distinct kicking motion’? That is the question.

“I don’t know, I don’t think I understand the rule,” Coleman said after the game. “Getting pushed, just tried to keep my foot on the ice. “I haven’t watched it enough but in live-speed, I felt like I was in a battle and my understanding is you can direct the puck but you just can’t kick it. I didn’t feel that I kicked it. But can’t go back and change it now. It is what it is.”

No amount of forensic analysis of the play is likely going to provide a satisfactory answer as to whether Coleman kicked in the puck. Or at least not an answer that convinces Flames or Oilers fans that the other side is correct.

That’s telling, though. If the video replay was inconclusive, the call on the ice should have stood. The Flames would have had to defend a 5-4 lead for six more minutes, but it might have been enough to earn them another shot at the Oilers in Game 6.

Coleman definitely doesn’t lift up his foot and kick the puck. He definitely doesn’t wind up, by any definition. The player himself seemed to admit that he tried to direct the puck into the net with his skate in his post-game media availability, but that’s different from a “distinct kicking motion,” is it not?

Well, the people who matter disagreed with that assessment on Thursday night.

In an interview on Friday morning with Sportsnet’s Eric Francis, NHL executive vice-president and director of hockey operations Colin Campbell stood behind the decision.

“It’s as difficult a call as we’ve had the last few years,” Campell said. “We felt there was a distinct kicking motion and he propelled the puck deliberately in. There’s no such thing as ‘the blade has to be on the ice.’ You can kick a puck without taking your foot off the ice.”

That won’t be good enough for Flames fans, and understandably so. Even those who can acknowledge that the Oilers were mostly the better team throughout the series and were probably going to wind up advancing can still feel aggrieved that the Flames weren’t given their rightful chance to keep battling.

For Flames fans who maybe felt that Calgary was owed a little karmic justice from the hockey gods after Martin Gelinas’ goal in the 2004 Stanley Cup final went unseen in the moment, Thursday night was a brutal reminder that that’s not how this works.

In a month or so, the space occupied by the Red Lot will be filled with smiling faces taking in the Calgary Stampede. Come fall, the Flames will gather once again and start the long process of another season, another shot at the Cup.

Years from now, though, you can bet that Albertans still won’t have come to a consensus on whether there was any distinct kicking motion from Coleman as he deflected the puck into the net.