Day one of Splendour In The Grass has been cancelled after extreme weather hit the New South Wales town of Byron Bay.

Organisers of Splendour have been forced to backflip on a notification sent to users about 11am saying the show would go on “rain, hail or shine” after the worst weather in the festival’s 20-year history struck.

Some festival attendees have expressed their disappointment in the cancellation, with one music lover describing the move as “pretty disgusting”. 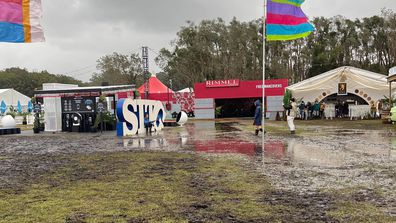 Mud and floodwaters defeat day one of Splendour In The Grass

“But if the sound gear is an issue, I can understand.”

Kiarah said “the party still goes on” but added the organisation has been “poor” this year and wants a partial refund, describing this morning’s notification a “lie”.

Jessica Ducrou, co-founder of the festival, reassured attendees that refunds would be given due to the cancellation.

“Don’t stress we will be refunding the proportionate amount of ticketing for missing out on a day’s worth of events,” she said.

She acknowledged this year’s weather is the worst the festival has experienced in its 20-year history.

Splendour organisers issued a statement about the decision to cancel performances on the main stages today.

“A significant weather system is currently sitting off the east coast and may reach land later today bringing more rainfall,” the statement said.

“We have decided to err on the side of caution and cancel performances on the main stages today only – Amphitheatre, Mix Up, GW McLennan and Park(lands) Stages.

“Day patrons are asked not to attend the festival today while we work on repairs.

“In the coming week Moshtix will be in contact with the ticket holders affected directly, via the email address used to purchase their ticket, for further information on refunds.

“We look forward to Saturday and Sunday programming moving ahead as planned.”

After organisers posted the statement on Facebook, many commented condemning it.

Some expressed concerns about how much money they’d spent on flights and accommodation, while others queried refunds.

Many music lovers had already arrived at the festival for the first day of the three-day event.

People camping at the festival have slammed organisers for what they said was a lack of communication as many queued for hours yesterday before being told the main campsite was closed due to flooding.

Many people had bought camping tickets to stay at North Byron Parklands however this was closed and attendees were redirected to Byron Events Farm.

Headliners like the Gorillaz, DMA’s, Yungblud and the Avalanches were set to perform this evening at the festival.