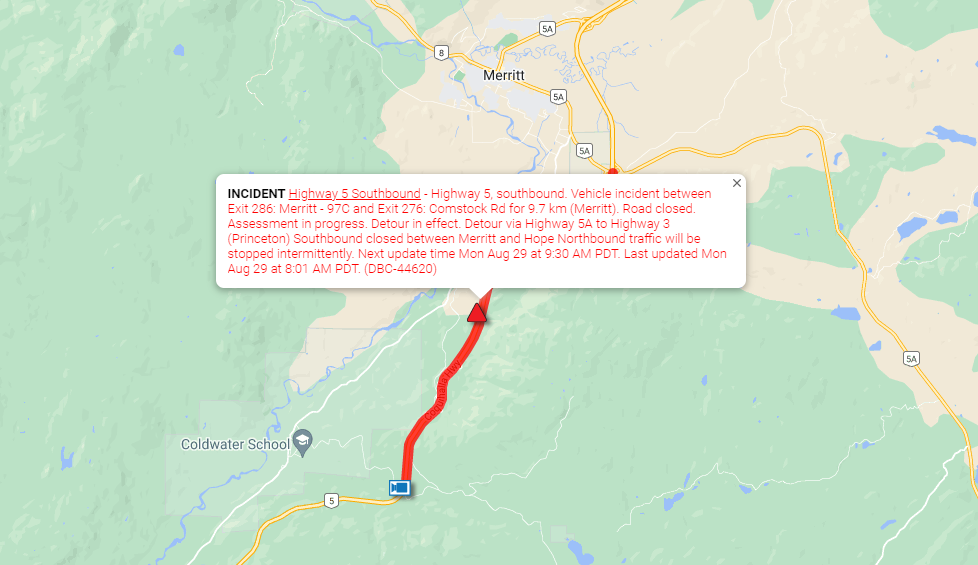 A crash along the Coquihalla Highway south of Merritt Monday has left one person dead and another seriously hurt.

The incident shut down the southbound lanes of Highway 5, with impact to northbound traffic too.

According to the RCMP, a slow-moving commercial truck was rear-ended by another transport vehicle around 6 a.m. The collision caused a fire.

“The co-driver in the second transport truck, also a man from Winnipeg, extricated himself from the cab but not before sustaining serious, life-threatening injuries,” a release issued Tuesday reads.

The fire, which engulfed the second truck, that resulted from the crash forced the closure of the Coquihalla for several hours, with impacts mainly to the southbound lanes but also to northbound traffic.

“Access to the scene for investigation was hampered due to the fire re-igniting,” the RCMP added.

It’s still unclear what caused the crash. All factors are being considered.

Mounties are hoping to speak with anyone who may have dashcam footage from the area. Investigators are also looking for anyone “who stopped at the scene, identified themselves as a witness, but did not provide their name or contact information.”