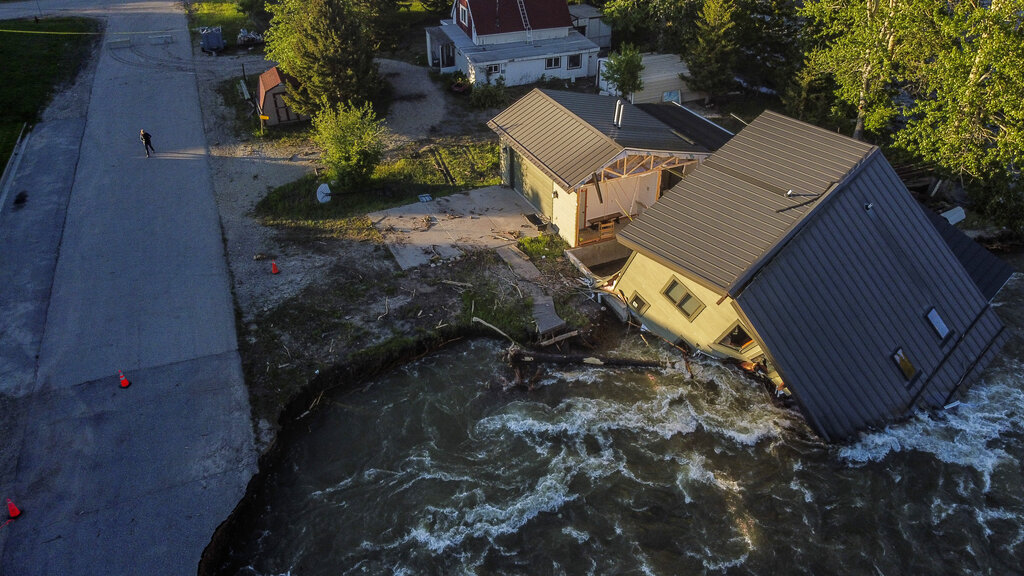 Parts of northern Texas, mired in a drought labeled as extreme and exceptional, are flooding under torrential rain. In a drought.

Sound familiar? It should. The Dallas region is just the latest drought-suffering-but-flooded locale during a summer of extreme weather whiplash, likely goosed by human-caused climate change, scientists say. Parts of the world are lurching from drought to deluge.

The St. Louis area and 88% of Kentucky early in July were considered abnormally dry and then the skies opened up, the rain poured in biblical proportions, inch after inch, and deadly flooding devastated communities. The same thing happened in Yellowstone in June. Earlier this month, Death Valley, in a severe drought, got a near record amount of rainfall in one day, causing floods, and is still in a nasty drought.

China’s Yangtze River is drying up, a year after deadly flooding. China is baking under what is a record-long heat wave, already into its third month, with a preliminary report of an overnight low temperature only dipping down to 94.8 degrees (34.9 degrees Celsius) in the heavily populated city of Chongqing. And in western China flooding from a sudden downpour has killed more than a dozen people.

In the Horn of Africa in the midst of a devastating but oft-ignored famine and drought, nearby flash floods add to the humanitarian disaster unfolding. Europe, which suffered through unprecedented flooding last year, has baked with record heat compounded by a 500-year drought that is drying up rivers and threatening power supplies.

“So we really have had a lot of whiplash,” said Kentucky’s interim climatologist Megan Schargorodski. “It is really difficult to emotionally go through all of these extremes and get through it and figure out how to be resilient through the disaster after disaster that we see.”

In just two weeks in late July and early August, the U.S. had 10 downpours that are only supposed to happen 1% of the time — sometimes called 1-in-100-year storms — calculated Weather Prediction Center forecast branch chief Greg Carbin. That’s not counting the Dallas region, a likely 1-in-1,000-year storm, where some places got more than 9 inches of rain in 24 hours ending Monday with several inches more forecast to come.

“These extremes of course are getting more extreme,” said National Center for Atmospheric Research climate scientist Gerald Meehl, who wrote some of the first studies 18 years ago about extreme weather and climate change. “This is in line with what we expected.”

Weather whiplash, “where all of a sudden it changes to the opposite’’ extreme, is becoming more noticeable because it’s so strange, said climate scientist Jennifer Francis of the Woodwell Climate Research Center in Falmouth, Massachusetts. She is in the middle of a study of whiplash events.

The scientists at World Weather Attribution, mostly volunteers who quickly examine extreme weather for a climate change fingerprint, have a strict criteria of events to investigate: they have to be record-breaking, cause a significant number of deaths, or impact at least 1 million people. So far this year they’ve been swamped. There have been 41 events — eight floods, three storms, eight droughts, 18 heat waves and four cold waves — that have reached that threshold point, said WWA official Julie Arrighi, associate director of the Red Cross Red Crescent Climate Center.

In the United States, many of the big heavy summer rains are traditionally connected to hurricanes or tropical systems, like last year’s Hurricane Ida that smacked Louisiana and then plowed through the South until it flooded the New York, New Jersey region with record rainfall rates.

But this July and August, the nation had been hit with “an overabundance of non-tropical related extreme rainfall,” the National Weather Service’s Carbin said. “That’s unusual.”

Think of the air as a giant sponge, said UCLA and Nature Conservancy climate scientist Daniel Swain. It soaks up more water from parched ground like a sponge “which is why we’re seeing worse droughts in some places,” he said. Then when a weather system travels further, juicy with that extra water, it has more to dump, causing downpours.

Another factor is the stuck and wavier jet stream — the atmospheric river that moves weather systems around the world — said Woodwell’s Francis. Storm systems don’t move and just dump huge amounts of water in some places. Other places, like China, are stuck with hot weather as cooler, wetter weather moves around them.

“When that jet stream pattern gets amplified, which is what we’re starting to see happen more often, then we notice more of these big whiplash events,” Francis said.

When the ground is so hard from drought, water doesn’t seep in as much and runs off faster in flood, Francis and others said.

This will only get worse as climate change worsens, so “it highlights the type of events that we need to adapt to, that we need to harden ourselves against,” said Princeton University climate scientist Gabriel Vecchi.

The United Nations’ Intergovernmental Panel on Climate Change emphasized what it called compounding weather disasters as a future threat.

“Frankly how fast and how badly it’s now playing out is a surprise to many of us,” said IPCC report co-author Maarten van Aalst, director of the Red Cross Red Crescent Climate Centre in the Netherlands. “It’s scary how quickly it is appearing in front of our eyes.”