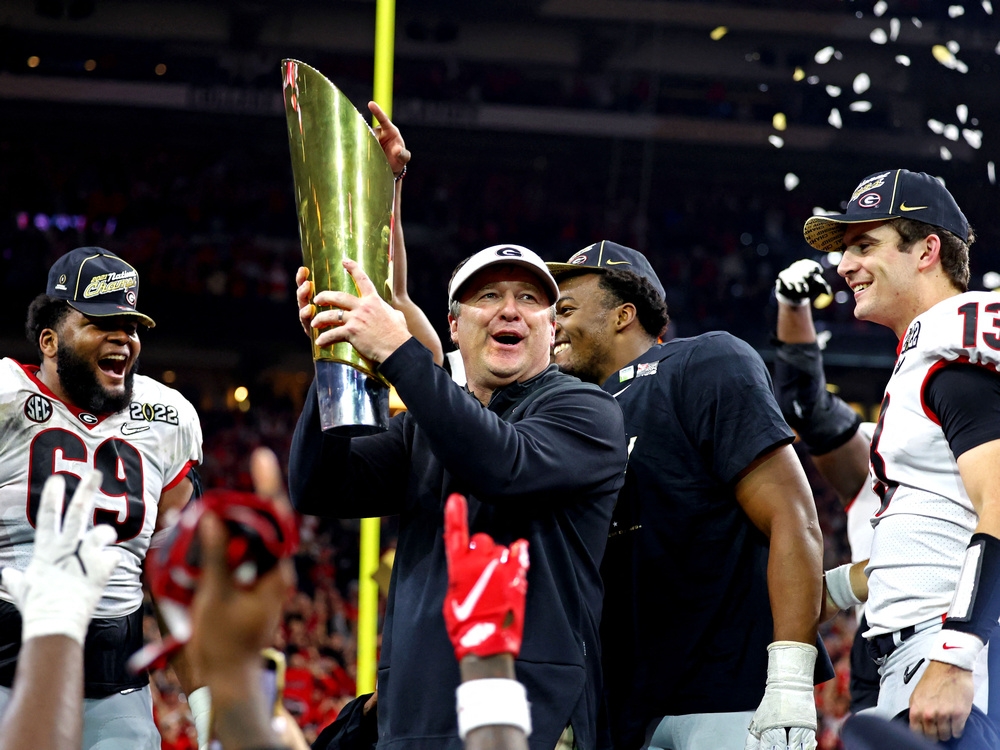 With a little good fortune — some luck of the Irish to begin with, in fact — the 2022 NCAA football season kicks off without a hitch …

And then steers clear of any COVID complications, which have plagued the last few campaigns, through to a successful conclusion.

That would be a nice change of pace for the college gridiron gang, wouldn’t it?

Here’s hoping for just that beginning with Saturday’s start to the schedule.

It’s Week 0 with a few premier programs on the slate, including an ‘I’m from Dublin, don’t ya know’ match pitting the Nebraska Cornhuskers against the Big Ten West rival Northwestern Wildcats in an overseas feature in Ireland’s capital (12:30 p.m. ET, FOX).

The opening Saturday is big compared to past years, with 10 other games on the agenda, capped by the Vanderbilt Commodores versus the host Hawai’i Rainbow Warriors (10:30 p.m. ET).

Is it a first step back to respectability for the struggling Nebraska program? Don’t bet on it, with the Cornhuskers’ constant run of misfortune (or is that mismanagement?). At least, don’t put Scott Frost’s squad among the contenders for this year’s title. His record — 15-29 — is ugly since arriving in Lincoln.

For now, the slate is clean for the 131 teams in it to win it all — and, indeed, that includes the hurtin’ ’Huskers.

If you’re doing the math, yes … one new club has been added to the NCAA’s top tier for 2022, as the James Madison Dukes — the 2016 FCS (that’s second tier) champions — have made the jump  to the big-boy ranks, putting up their dukes in the Sun Belt Conference. With the addition of James Madison, which had been a perennial FCS powerhouse, it begs the question, ‘What about you, North Dakota State?’ Surely, the North Dakota State Bison could compete at the FBS level after winning nine of the last 11 FCS titles.

But let’s focus on who is in the mix for the tier-one title, which gets decided — ultimately — by the College Football Playoff National Championship Game slated for Monday, Jan. 9 at SoFi Stadium in Inglewood, Calif.

Here are 10 big storylines in play for the 2022 NCAA season:

Surely. That’s because Kirby Smart has built a program to capture another national crown on the heels of its 33-18 win over nemesis Alabama in the championship game last January. On paper, Georgia might not seem to be the ’Bama-beater of last year, but Smart has all the talent in the world — and now the confidence after last year’s title take — to become a repeat king. After all, success breeds success.

Speaking of that whole success thing, both Lincoln Riley and Brian Kelly bred that at Oklahoma and Notre Dame, respectively. But they’ve each taken their splendid coaching resumés to other programs after accepting monster contracts at USC and LSU. With those moves comes automatic must-watch football under Riley, in SoCal, and Kelly, in The Bayou. So add those two teams to your contenders list with ’Bama and Georgia.

It’s been nothing but departure — and subsequent depression among fans — in Norman. Riley left the ever-strong Oklahoma program for the West Coast, and with him went QB Caleb Williams. Last year’s early-season starter, Spencer Rattler, also took his arm to another team, South Carolina, too. But the good news is talented QB Dillon Gabriel opted for OK, leaving UCF to do so. Is it a rebuild or a reload year under new head coach Brent Venables, who was a defensive guru for champ Clemson?

Most pundits feel Clemson will bounce back after a strange 10-3 campaign that saw Dabo Swinney & Co. lose two early before reeling off eight wins in their final nine games. But a rebound really comes down to whether QB DJ Uiagalelei is truly the man. He didn’t grab the mantle last year when he threw for just nine touchdowns against 10 interceptions, but Swinney is backing the junior pivot — and that should go a long way.

Texas lost six-straight games in a horrific 5-7 2021 season. But that’s not deterring oddsmakers from giving that program fairly short numbers to win it all — some rank unranked Texas seventh among NCAA title hopefuls. It’s Steve Sarkisian’s second year, and he does have Heisman Trophy hopeful RB Bijan Robinson. However, he needs one of Hudson Card or No. 1 recruit Quinn Ewers — the newly minted starter — to step up at QB.

Speaking of the Heisman, QB Bryce Young is in repeat mode after winning the most outstanding college player award while guiding Alabama to the NCAA final. But the only guy ever to win it twice is RB Archie Griffin, with Ohio State in 1974 and ’75. So history demands it’ll likely be another name, and Ohio State QB Chris Stroud (+200), USC QB Caleb Williams (+600) and ‘Bama LB Will Anderson Jr. (+2000) — although it’s usually a QB battle — all spring to mind as early front-runners to dethrone Young (+350).

Do Jim Harbaugh and Michigan come back with J.J. McCarthy or Cade McNamara at QB? Jaxson Dart left USC for Ole Miss, but he’s no lock there with Luke Altmyer’s potential there. Same goes for Texas A&M-bound Max Johnson — son of 2002 Super Bowl winner Brad Johnson — who’s got competition from Haynes King. And Johnson leaving LSU doesn’t automatically give Arizona State-transfer Jayden Daniels the job in The Bayou with sophomore talent Garrett Nussmeier on hand. Finally, who’s the guy for Auburn — Texas A&M-transfer Zach Calzada or T.J. Finley, another transfer from LSU?

The Pac 12 is in danger of losing two of its flagships in USC and UCLA after both accepted a move to the Big Ten come 2024, potentially making the West Coast conference a 10-team loop again — and a rather weak one at that. But word came out this week that the University of California Board of Regents, which establishes university policy for all UC campuses and locations, could kibosh UCLA’s jump. And here we thought it was supposed to be Riley and UCLA head coach Chip Kelly saving the Pac-12.

Yes … Texas and Oklahoma are still on their way to the SEC, poised to leave the Big 12 — but not apparently until after next season. That means the 10-team Big 12 — which it’s been since 2011 and is in itself confusing — could be a whopping 14-teamer come 2023, with the confirmed additions of BYU, UCF, Houston and Cincinnati next fall. Can we check the math for some name changes for the Big 12 and the Big Ten, which boasts 14 teams and — at least — 15 come 2024?

We finally got some new blood — including a previously struggling blue blood — into last year’s College Football Playoff in Cincinnati and the Michigan. Can we do the same again for this year’s final four? New contenders coming to mind are Texas A&M, Utah and USC — Nos. 6, 7 and 14, respectively, in the AP Top 25 pre-season poll. Michigan ranks eighth so there’s big hope for a repeat, while No. 23 Cincy — without QB Desmond Ridder — faces an uphill fight.

And in case you didn’t know … Nick Saban will remain as Alabama’s coach on an eight-year deal worth US$93.6 million after university trustees approved the contract extension Tuesday. With the contract, the 70-year-old Saban again becomes college football’s highest-paid coach. His contract will pay an average yearly salary of $11.7 million, surpassing the $11.25 million annual average value of the 10-year contract Smart signed with Georgia in July.