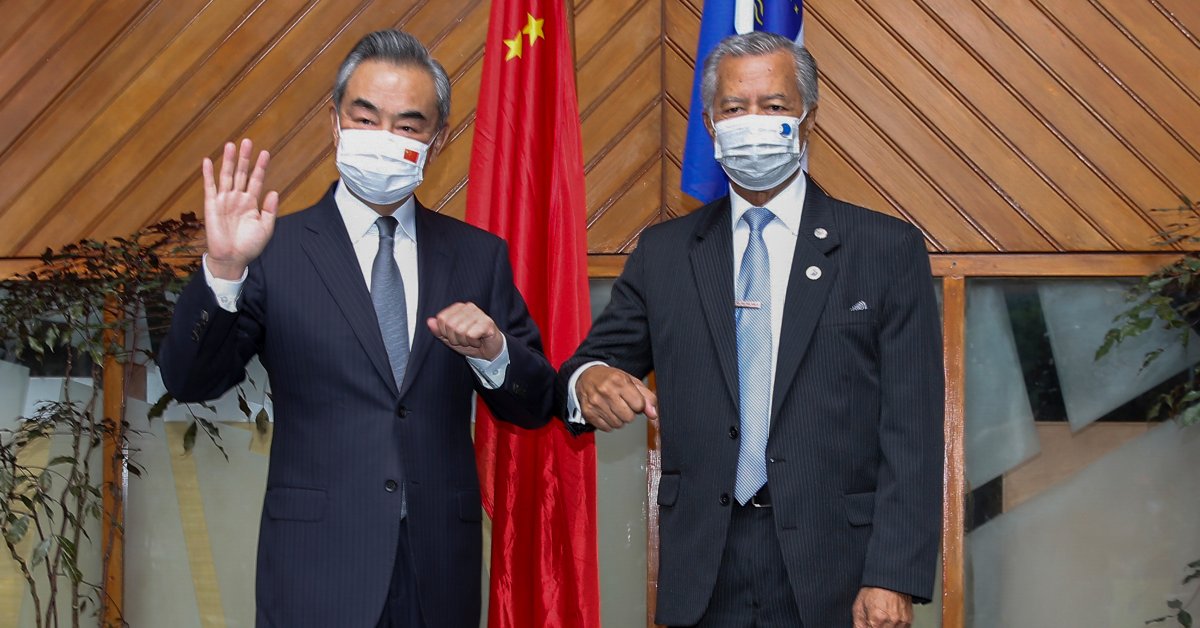 SUVA, Fiji — China fell short Monday on a bold plan to have 10 Pacific nations endorse a sweeping new agreement covering everything from security to fisheries as some in the region expressed deep concerns.

But there have been plenty of smaller wins for China’s Foreign Minister Wang Yi as he continues an island-hopping tour of the region.

Wang was in Fiji to co-host a key meeting with the foreign ministers from the 10 island nations.

At an unusual news conference afterward, Wang and Fijian Prime Minister Frank Bainimarama spoke for about 30 minutes and then abruptly left the stage as reporters tried to shout out questions. That left many details of what transpired at the meeting undisclosed.

But it was clear the nations hadn’t endorsed China’s plan.

Read More: What to Know About China’s Security Pact with the Solomon Islands

“As always, we put consensus first among our countries throughout any discussion on new regional agreements,” Bainimarama said.

While there have been growing international concerns about Beijing’s military and financial ambitions in the region, many Fijians see a benefit in foreign investment wherever it comes from, so long as it uplifts the people.

Georgina Matilda said that working for Chinese infrastructure company China Railway meant that she could put food on the table for her children.

Scaffolding is erected at a China Railway construction site along the seawall near the Chinese Embassy in Suva, Fiji, Friday, May 27, 2022.

Documents obtained by The Associated Press indicate Wang had hoped to get the 10 nations to endorse a pre-written agreement as part of a joint communique after the meeting.

But Wang was unable to get the consensus he’d sought.

David Panuelo, president of the Federated States of Micronesia, told other Pacific leaders he wouldn’t endorse the plan, warning them in a letter that it would needlessly heighten geopolitical tensions and threaten regional stability.

From the Archives: Why America Is Losing Asia

Panuelo called it “the single most game-changing proposed agreement in the Pacific in any of our lifetimes” and said it “threatens to bring a new Cold War era at best, and a World War at worst.”

During the news conference Monday, Wang listed some areas where the countries had been able to find agreement and said he’d keep working on others.

“After the meeting, China will release its own position paper on our own positions, propositions, and cooperation proposals with Pacific Island countries,” Wang said through an interpreter. “And going forward, we will continue to have ongoing and in-depth discussions and consultations to shape more consensus.”

This picture released by the Samoa Observer on May 27, 2022 shows Chinese Foreign Minister Wang Yi (front) disembarking from his plane at Apia International Airport as he arrives for an official visit to Samoa.

For instance, on Friday Wang visited Kiribati, where a key fishing ground the size of California is at stake. Kiribati’s government said afterwards the two nations had signed 10 agreements ranging from cooperating on economic goals to building a specific bridge.

Kiribati’s government did not immediately respond to a request by the AP to provide details of the agreements.

In his news conference, Wang said “some have been questioning why China has been so active in supporting Pacific Island countries.”

He said China had long championed other developing nations both in the Pacific and around the world, something it had started doing in the 1960s when it helped African nations build railways.

Read More: Biden’s Focus on ‘Shared Values’ May Be a Blunder in Asia

“My advice for those people is: Don’t be too anxious and don’t be too nervous,” Wang said.

After the news conference, China’s ambassador to Fiji Qian Bo took a few questions from reporters, saying there had been “some concerns on specific issues” from some of the 10 nations about the proposed agreement.

“We never impose anything on other countries, let alone to our developing friends and small island countries,” Qian said.

He said China would try to release the position paper mentioned by Wang within about a week. He said parts of the agreement were simply an offer from China to provide assistance to the nations.

A draft of the proposed multilateral agreement obtained by the AP shows that China wants to train Pacific police officers, team up on “traditional and non-traditional security” and expand law enforcement cooperation.

In this photo supplied by the Fiji government, the President of Fiji, Ratu Wiliame Katonivere, left, watches as the Chinese Foreign Minister Wang Yi signs the visitors book at the State House in Suva, Fiji, Monday, May 30, 2022.

China also wants to jointly develop a marine plan for fisheries — which would include the Pacific’s lucrative tuna catch — increase cooperation on running the region’s internet networks, and set up cultural Confucius Institutes and classrooms. China also mentions the possibility of setting up a free trade area with the Pacific nations.

U.S. Secretary of State Antony Blinken said in a speech Thursday that China posed an even more serious long-term threat than Russia.

“China is the only country with both the intent to reshape the international order — and, increasingly, the economic, diplomatic, military, and technological power to do it,” he said. “Beijing’s vision would move us away from the universal values that have sustained so much of the world’s progress over the past 75 years.”

China hit back, saying the U.S. was spreading disinformation. The aim of Blinken’s speech was to “contain and suppress China’s development and uphold U.S. hegemony,” Chinese Foreign Ministry spokesperson Wang Wenbin said. “We strongly deplore and reject this.”

China says that in the Pacific, cooperation between Beijing and the island nations has been expanding in a development that’s welcomed by those countries.

Read More: The Quad Alliance Is Ambiguous and Contradictory

In Fiji, the economy was hit hard by the coronavirus pandemic. The vital tourism industry shut down overnight and GDP shrank by more than 15%. As the world reopens, Fiji is trying to bounce back, and many are happy to see China write the checks.

China’s involvement in the region doesn’t come completely out of the blue. There has been a long history of Chinese immigration in Fiji, with many Chinese Fijians running corner stores and other businesses.

“There’s a good side and a bad side,” said Nora Nabukete, a student at the University of the South Pacific. ”We get more money into the economy, being pumped in and stuff, but then there’s also a side where they bring in a lot of new things that are new to the Fijian culture.”

Nabukete worries about the seedier side that has been associated with Chinese investment in Fiji — a supposed influx of gambling, gangs and drugs.

She said that aligning with China could mean that Fiji creates tension with the United States and other Western nations, and for that reason, she hopes that Fiji doesn’t endorse Wang’s agreement.

“There’s so much more to lose in the future than what we’re experiencing now if Fiji does sign,” she said.