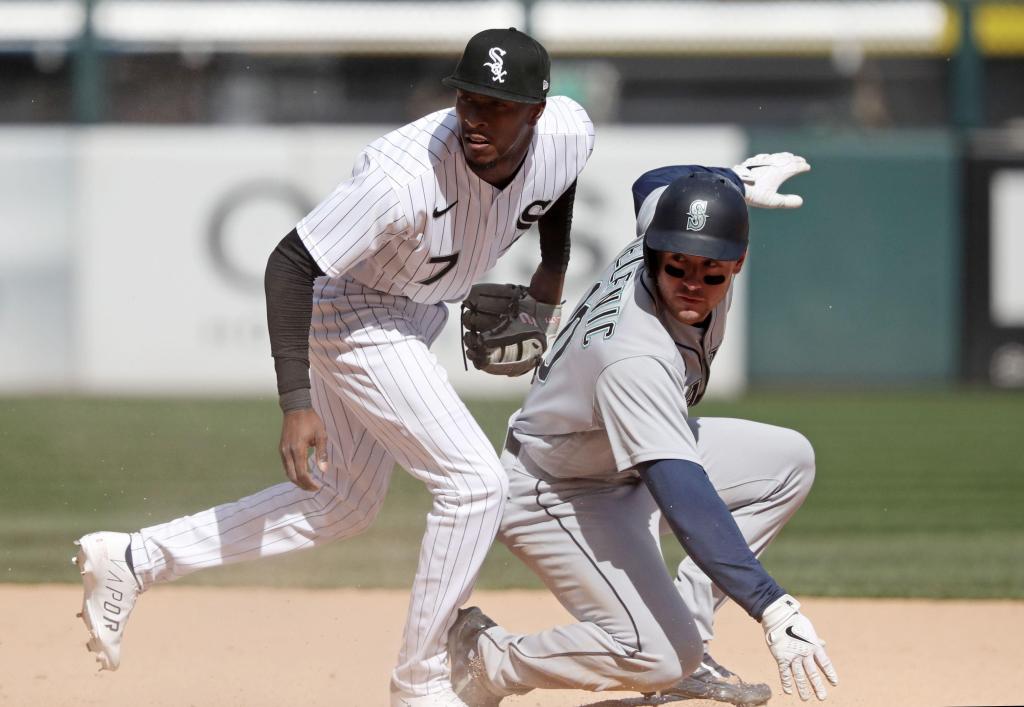 Jake Burger followed with a popup between second and third. Shortstop J.P. Crawford couldn’t make the catch on a play that was ruled a , scoring Engel and bringing the Sox within a run on a blustery afternoon.

Raleigh made up for his miscue in the seventh with a home run — the second of three homers on the day for the Mariners, who topped the Sox 5-1 in front of 13,391.

“It’s just a weird day,” Sox first baseman Gavin Sheets said. “We were talking on the infield. Everybody had to help each other out, because you never knew which way the ball was going to go.

“It was moving about 20 feet out there, at least, in the air. You’re just helping out your teammates on those.”

The Sox were limited to four singles — one by Sheets, two by Tim Anderson and Burger’s popup — as they saw their four-game winning streak come to an end.

Jarred Kelenic’s long fly to right hit the foul pole for a two-run homer with two outs in the second against Sox starter Jimmy Lambert, giving the Mariners a 2-0 lead.

Lambert, called up Tuesday and starting in place of injured pitcher Lucas Giolito, allowed two runs on two hits with a strikeout and a walk in three innings.

“I’d like to be able to do more,” said Lambert, who threw 49 pitches. “Really one pitch. But hopefully we can build off of it.”

Lambert said the walk to Eugenio Suárez that preceded the homer stood out.

“That is the killer,” Lambert said. “Lead-off walks and two-out walks, they’ll always come back to bite you. It’s basic baseball. It never fails.”

The Sox took advantage of the misplayed popups in the fifth on the balls hit by Engel and Burger to cut the deficit to 2-1.

“I’m trying to decide if my first big-league hit in Detroit or that was better,” Burger said.

“At least that one (Thursday) resulted in an RBI,” Burger said.

“He’s got some good spin rate,” Burger said. “He kind of works it back and forth and he’s a great pitcher. He executed today.”

Raleigh extended the Mariners’ lead to 3-1 when his long fly against reliever Bennett Sousa kept drifting in left field and landed in the Sox bullpen.

Mitch Haniger hit a two-run homer off reliever José Ruiz in the eighth.

Just one batter reached base for the Sox in the final four innings, a one-out walk in the eighth by catcher Reese McGuire.

Still, they were able to take two out of three in a series during which starting left fielder Eloy Jiménez (bruised left ankle) and second baseman Josh Harrison (lower back stiffness) exited Wednesday’s game early with injuries. Neither played Thursday.

“Win (the first) two series (of the season) that’s a huge positive that you can enjoy for the next two, three hours and all of the sudden there’s another one that comes up so you better make sure you’re concentrating,” Sox manager Tony La Russa said. “There’s nothing wrong with (what former Sox general manager) Roland Hemond (said), ‘Enjoy the moment.’

“But I felt better (Wednesday) night than I do now. I’ve never had a problem giving the other team credit when they out-pitch you, out-hit you, out-play you. We had a chance, we hung in there but we couldn’t get anything going. That’s to their credit.”