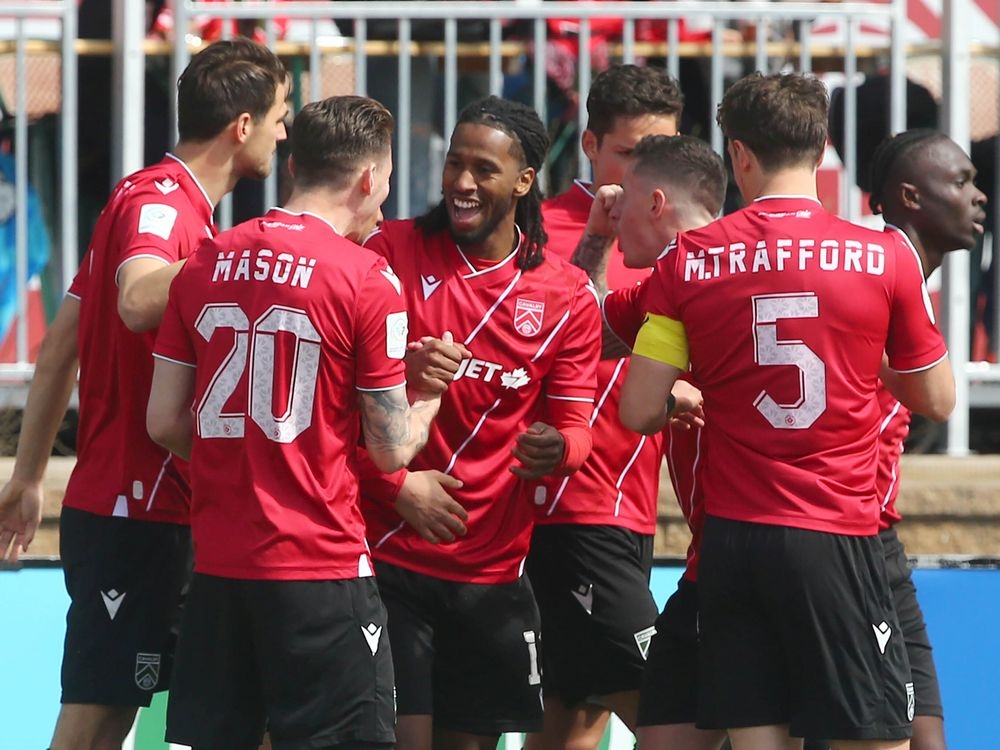 Home isn’t only where the heart is for Cavalry FC.

It’s where the wins have come historically for Calgary’s professional footie side.

Pretty much guaranteed ones.

The hope is that more of them fall the Cavs’ way with four of their next six matches — both in Canadian Premier League and Canadian Championship competition — slated for Spruce Meadows, beginning with Saturday’s matchup against Valour FC (1:30 p.m., OneSoccer TV/OneSoccer.ca).

It’s a time for the club to make hay in the CPL and make their way further down the line in the ‘Battle of the North’, the nation’s domestic cup tournament.

“The difference about playing at home is that’s it’s a wonderful pitch — there’s no bounce or bobble, and it’s flat and pristine. It was different than playing on the grass pitch (last weekend) in Halifax — they had a terrible run of weather and things that went against them, and it didn’t make for a purist type of a game (in a 2-2 draw with HFX Wanderers FC).

“So we’re looking forward to putting on a show here.”

Not just this Saturday but next Wednesday, as well, when the Cavs (3-2-2 overall) host Major League Soccer’s Vancouver Whitecaps in a one-game, winner-take-all Canadian Championship quarter-final contest at ATCO Field (7 p.m., OneSoccer TV/OneSoccer.ca).

Indeed, there’s a lot on the line on the home pitch in the next little while.

And a weekend win over Valour (2-2-1 in CPL action) would be a solid starting point for the Spruce Meadows squad.

“Valour’s a good team,” said Wheeldon Jr., of an enemy from Winnipeg which is unbeaten in three-straight league games but was knocked out of the Canadian Championship by the host Whitecaps in a 2-0 decision 10 days ago.

“I think Phil (Dos Santos) has done a great job with Valour. They’ve shown they can hurt teams, and they’re right in the mix. Valour is a very good technical side and play the possession game well. But we believe we have a very good possession-type game as well.

“For us, we just have to keep to our strengths and expose their weaknesses. But it’s certainly a game we’re looking forward to playing in front of our fans again and on our pitch. It’s up to us to use our home-field advantage against them.”

The Cavs are 2-0 on ATCO Field this year, but that mark includes a 2-1 Canadian Championship first-round triumph over visiting FC Edmonton. The home CPL win was a 2-0 drop of league-leading Pacific FC.

“May’s been a really good month for us,” added Wheeldon Jr. “But what’s been great is we’re entering the seventh league game — which is a quarter of the season played — and this is only our second home game of the season and we’re right in the running where we need to be.”

It is quite the logjam in the standings heading into Saturday’s action. While Pacific (5-1-1) is far out front of the field with 16 points, there were six teams in the eight-club competition — including third-place Valour and fourth-spot Cavalry — tied on eight heading into Friday’s late match between Pacific and York United FC. Winless FC Edmonton (0-4-3) sports three points … Cavalry midfielder Sergio Camargo (calf) is ready to return to the active roster after missing all six games since the season-opener, while both defender David Norman (illness) and attacker Joe Mason (groin) are game-time decisions … Of the team’s other injured players, midfielder Joe Di Chiara is the closest to returning. He’s up and running, says Wheeldon Jr., after an MCL issue has kept him out of the lineup so far this season. The other four — defender Tom Field (knee), goalkeeper Tyson Farago (back), midfielder Joe Di Chiara (MCL) and forwards Anthony Novak (ACL) and Fraser Aird (ACL) — remain out long-term.