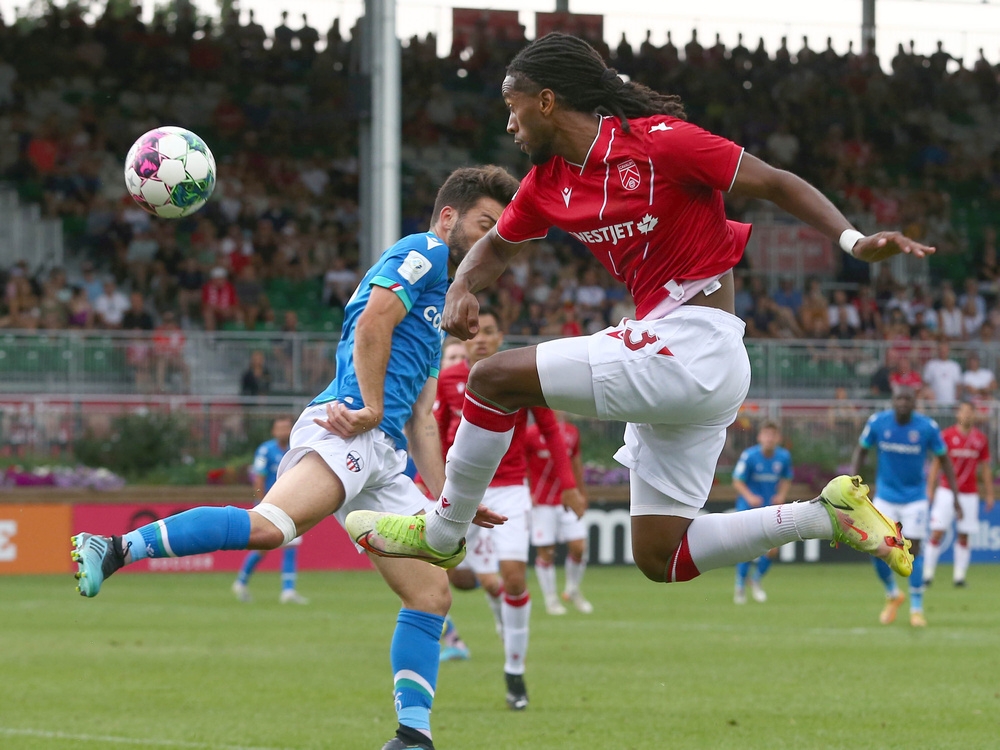 Not because it was dominated for much of the match at ATCO Field.

“The rewards came out for us at the end,” said Atlético Ottawa newcomer Robert Antoniuk, a Calgary product with friends and family on hand for his team’s away contest — a surprising 3-0 triumph. “To score three goals with that amount of possession is crazy, so we’re pretty happy.

“I’ve been hearing the guys talk about how they always seem to play well against Cavalry. It could be just a luck thing.”

Certainly, the result in this one — to run their all-time record against the Cavs to 5-1-1 — just didn’t match game-play in their first-ever visit to Spruce Meadows, but the visitors will take it.

“Cavalry is a top team,” Antoniuk said. “So to win 3-nil away against a top, top team is a statement.”

Meanwhile, it’s a lost chance for the Cavs.

The game gave them a chance to widen the gap over fifth-place Valour FC (7-6-7) — which drew 1-1 with visiting FC Edmonton also Sunday — in pursuit of one of the four post-season spots, but it wasn’t to be despite what was a major statistical advantage game-wide for Cavalry.

“The only stat that counts is on the scoreboard at the end of the game,” said Cavs goalkeeper Marco Carducci. “It’s about winning games, and obviously we let ourselves down there.

“It’s a difficult one,” continued Carducci. “We dominated a lot of the ball. We had a ton of chances early in the game. But credit to Ottawa — they obviously came with a plan, and they executed. At the end of the day, they put three past us at home.”

To start the game, the home side proved beyond dominant, exerting near full control of the contest.

In fact, only two chances were had by the visitors in the first 45 minutes, while the Cavs were dangerous nearly every tick of the clock. Daan Klomp and Karifa Yao were close on headers around the net, Ali Musse was off the mark on a couple of blasts, Joe Mason was a handful for Ottleti defenders, and Ottawa goaltender Nathan Ingham came up with a few timely saves, including the save of the match on a test from Jose Escalante from about 12 yards out.

Instead, the Cavs came up empty on the scoreboard, and Ottleti took advantage of an opportunity in first-half stoppage time to score the game’s first goal — a Keven Alemán howitzer past Carducci from 12 yards out after teammate Brian Wright found him with a seeing-eye feed from the corner of the pitch.

“We conceded a goal right before halftime, which is obviously a terrible time to concede a goal in any match,” Carducci said. “They were clinical in our box. We weren’t good enough defensively. And we weren’t clinical in their box.”

The second half proved much the same after a 45-minute lightning delay.

Cavalry again poured on the pressure but couldn’t find the back of the net. Yao had another header opportunity off a corner kick, as did Joe Di Chiara. Other chances went for naught, as well.

Meanwhile, Ottawa made the most of limited threats. On a 52nd-minute Atleti rush, Ballou Tabla fired a ball off the crossbar.

But helped to make it count on the next offensive foray with a quick kick over the Cavs defence just inside the opposition half in the 79th minute that sprung Wright free. The Ottleti veteran then tracked the ball down in the penalty area and chipped in a goal over top a charging Carducci.

At 2-0, the wind was knocked out of the sails of the home side.

And with Cavalry pressing, Ottleti added late insurance on a rush, when Carl Haworth raced in alone and made an easy pass in the box to teammate Oliver Bassett for an 89th-minute strike.

“As a goalkeeper, I take a lot of pride in not conceding any goals,” Carducci said. “And anytime you concede three, especially at home, it’s a terrible feeling.”

One the Cavs won’t soon forget.

“You’ve got to give Ottawa credit. They picked the game plan that was designed to win them three points — and they did that. We’ve got to take that on the chin and move on.”

Cavalry gets a chance to get up next Saturday, when it hosts York FC United at Spruce Meadows (1:30 p.m., OneSoccer, OneSoccer.ca).