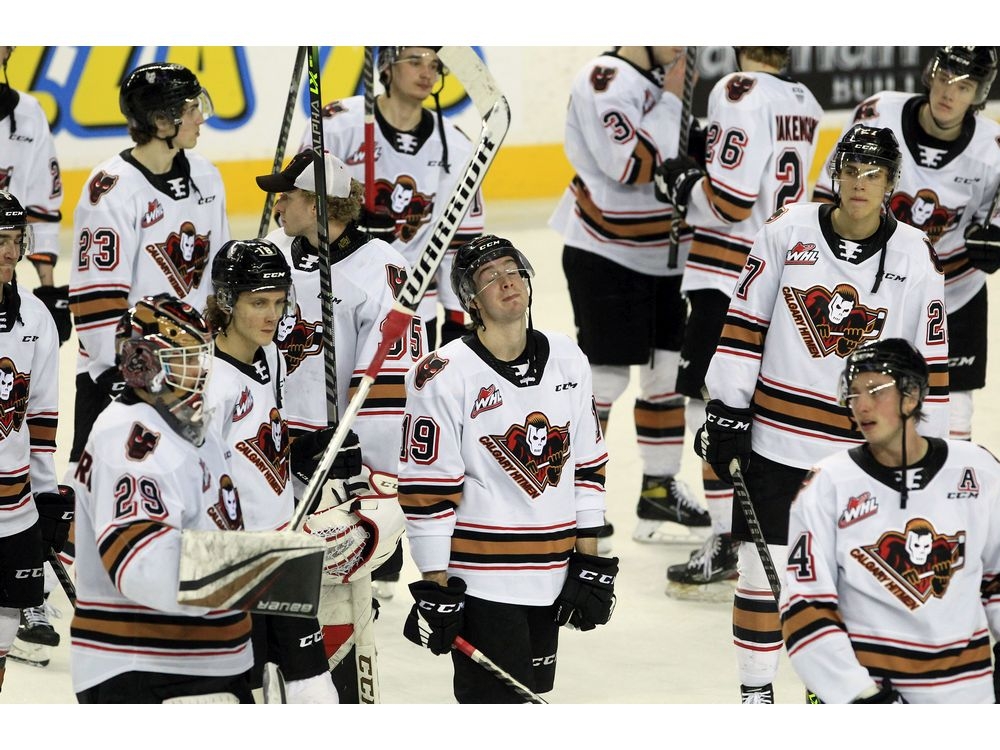 The Calgary Hitmen won’t be playing in the WHL playoffs this year.

That was determined on Saturday night when the Prince Albert Raiders locked up the eighth-and-final playoff spot in the league’s Eastern Conference. It meant the Hitmen’s 3-2 overtime loss to the Lethbridge Hurricanes on Sunday afternoon at the Scotiabank Saddledome was essentially meaningless.

That’s disappointing, for sure.

The Hitmen would have loved to be in the playoffs.

But as far as the Hitmen organization’s multi-year-project of turning itself into a true championship contender? Well … missing the playoffs doesn’t derail that.

n head coach Steve Hamilton. “It’s a long season, and this year, with all the uncertainty and the shutdowns and the challenges you go through when the season gets extended, it took a long time to get to 68 games and I thought our group progressed significantly from the start of the year.

“I think had you said, ‘You’re going to play essentially 67 meaningful games where you’re going to have a chance to push for your own playoff spot’ at the beginning of the year, I think we would have said, ‘That’s fair.’”

Throughout the season, the Hitmen never strayed from their stated goal of trying to make the playoffs. They wanted to stay competitive and refused to use their youth as an excuse for falling short.

But excuses and explanations are not the same thing, and there’s no question that the Hitmen’s youth was a challenge that any team would have struggled to overcome, especially as they traded away impactful veterans such as Luke Prokop and captain and fellow defenceman Jackson van de Leest during the season.

“We’re a young, young team,” said Hitmen winger Sean Tschigerl. “This is a hard league. Your winning teams are full of 18-, 19- and 20-year-olds. You look at the teams at the top of the division with 10-plus 19-year-olds, and you look at the start of the year, and I think we had nine (guys playing their first WHL games). We battled.

“We’ve got a good foundation. You get older, and you get more mature. You look at teams around the league, and you get a year older and you’re just winning battles (and) you’re playing better. You’re more mature and confident with the puck.”

There’s a lot of optimism about what the next season or two might hold for this young Hitmen team. Ultimately, they finished two points back of a playoff spot and tied with two other teams with 59 points from their 68 games this year.

If it hadn’t been for a particularly rough stretch in February, they might very well have been packing their bags for a first-round playoff trip with one of the Eastern Conference’s powerhouses this week.

Instead, the focus turns to next year.

Well … maybe there will be a couple weeks of rest before that, but it’s going to be an important summer in the gym for these young Hitmen.

Cael Zimmerman, the 20-year-old Hitmen captain, won’t be back next year. His final WHL season didn’t end the way he surely would have liked, but he sees big things ahead for the organization he’s called home for the last five seasons.

“We definitely were young group this year, but with that is just opportunity,” Zimmerman said. “They’re going to get older and better, and Hammy, our coach, had said us 20-year-olds were probably going to plant seeds that we’re not going to see grow, teaching the younger players the little things and they’ll eventually grow into these awesome players, and hopefully that’s what they can do.”