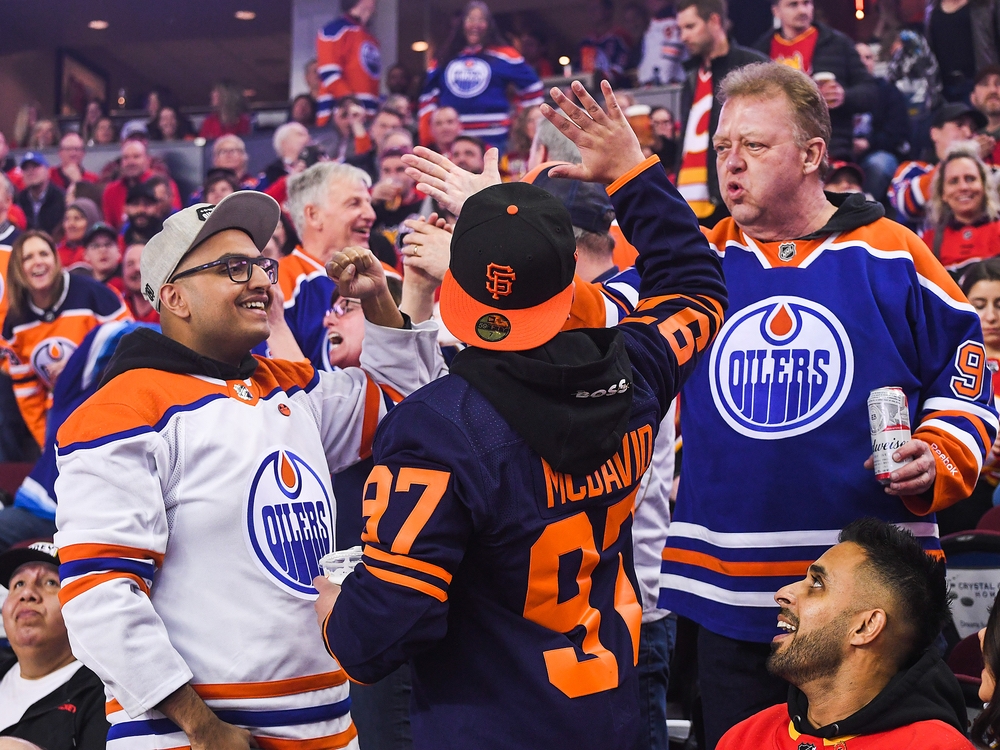 Nothing goes better together than good teams and bad blood, which is why everyone in hockey is hoping the Edmonton Oilers and Calgary Flames are about to embark on something special.

While the Battle of Alberta had its moments in the 31 years since these teams last met in the playoffs, the rivalry has been longing for a post-season showdown ever since.

Finally, with the Oilers and Flames both at the top of their games, and the top of the NHL over the last two months, there aren’t a lot of dots to connect between now and a head-to-head series in May.

That’s still a long way off, and players are trained to live in the moment, but even they can’t help but get excited about the possibility.

“When you get to this point in the schedule, and both teams are in a playoff position, it just adds to the rivalry,” said former Oiler and current Flame Milan Lucic. “You feel the buzz in the city. Flames and Oilers fans are excited for this and we are as players, as well.

“There are a lot of games left to be played. If it happens it will be something great to be a part of. I think of my time in Boston — we played the Canadiens four times in the playoffs in the first seven years I was there. It just adds to it because there is a history to it.

“It will be great for us as players too with the travel. We wouldn’t have to travel too hard so it wouldn’t be be too hard on the body that way. It would be great.”

Oilers forward Zack Kassian is also a fan of how both Alberta teams are trending, believing it’s good for the entire province when the Oilers and Flames are playing for more than just pride.

“It’s awesome for Alberta,” he said. “Both teams are as deep as they’ve been in a long time. It just means good hockey for the fans.”

Saturday in the Saddledome, the last regular-season meeting between the two teams, was the final opportunity to send a message and see who can handle what might lie ahead.

“It’s big to see who’s ready to step up in big games and play a big game when it matters the most,” said Lucic. “That’s why both teams look forward to it, it’s a big test that way.”

The Flames, who’ve long had a reputation for being underachievers, seem to be changing that narrative under head coach Darryl Sutter.

It remains to be seen how they fare in the playoffs, but they are playing the kind of tight, disciplined hockey that usually succeeds in the spring. Sutter, whom many worried was too old school to have an impact in Calgary, has done wonders. He’s got everyone playing responsible two-way hockey, with Johnny Gaudreau (plus-45), Elias Lindholm (plus-45) and Matthew Tkachuk (plus-38) all in the top five in NHL plus-minus.

“I think it’s his ability to hold us accountable on a day-to-day basis,” said Lucic. “You know how he is, he’s not afraid to hold his best players accountable. That’s why I think it’s been a cultural change ever since he’s been around.”

“I had Torts (in Vancouver) and they’re similar in a way,” said Tanev. “Every day, every game is the most important game of that year. He holds everyone accountable. It doesn’t matter what you did yesterday. It’s about today and moving forward as a player and as a team.”

The Oilers have also changed course after a coaching switch, with Jay Woodcroft bringing a shift in focus and getting a strong buy-in throughout the lineup. The result is a more consistent game from the Oilers, who’ve stepped up their five-on-five play and gone 13-6-2 in the first 21 games since Woodcroft took over from Dave Tippett.

“When a coach gets fired, especially a likeable coach, everyone liked Tipp, all the players give themselves a good look in the mirror,” said Kassian.

“Woody came in and he pays very close attention to detail. As a team, we’re very detailed. We know where we’re supposed to be and how we’re supposed to play on a night-to-night basis. Everyone is on the same ship, there are no passengers.”

A GRAND FOR MCLELLAN

Woodcroft was asked Saturday about his mentor, L.A. Kings coach Todd McLellan, who is scheduled to coach his 1,000th NHL game Monday against Seattle.

He said working with McLellan in Detroit, San Jose and Edmonton provided a great foundation for his own career.

“He took a chance on me and brought me from the Detroit Red Wings to the San Jose Sharks in an increased capacity,” said Woodcroft.

“He had a belief in me and I had a belief in him. He’s someone who led by the simple eloquence of his example. I had a front-row seat at someone at the top of his craft. How he approached things on a daily basis, how he dealt with stress. How he dealt with trying to get the most out of people. I’m very fortunate to have been around one of the best in the game.”