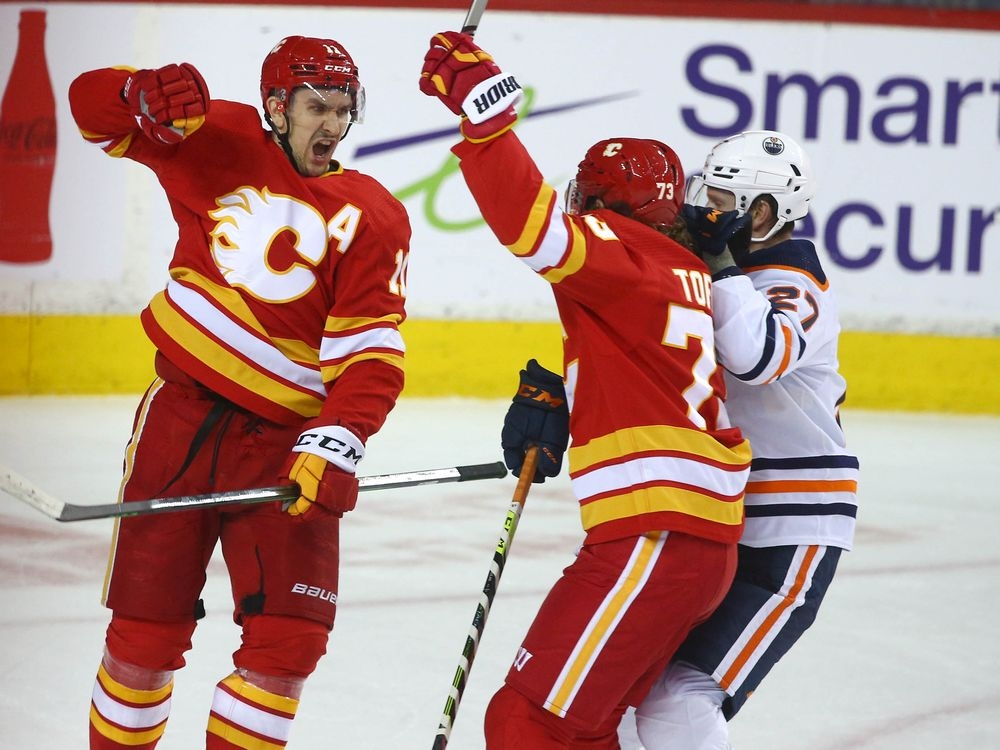 A franchise icon and now one of the Calgary Flames’ biggest fans, Lanny McDonald had just a single gripe about Saturday’s rout of the arch-enemy Edmonton Oilers.

“I wasn’t at the game but was obviously watching on television,” said McDonald of this Battle of Alberta barn burner — a back-and-forth affair that turned into a 9-5 blowout in favour of the Saddledome hosts. “You couldn’t even get up and go for a beer because you thought you were going to miss something. Oh my gosh, it was fast and furious.”

Indeed, there were not a lot of lulls in the action.

The Flames and Oilers combined for 14 goals in Saturday’s Hockey Night in Canada capper, one shy of matching the highest total in any of nearly 300 previous editions of this provincial puck rivalry.

It was the sort of wild west shootout that had many reminiscing about the high-scoring 1980s, when Lanny was heydaying at the Saddledome, Wayne Gretzky was starring a few hours to the north and those poor guys between the pipes rarely seemed to stand a chance.

“I never saw this one coming, I can guarantee you. And I don’t think a whole lot of people did,” said McDonald, a Hockey Hall of Fame inductee and co-captain for Calgary’s best team of all-time — the gents who raised a Stanley Cup banner in 1989. “I would have never guessed 14 goals would get scored, in this game especially. But hey, the good news is the right team came out on the right side of it and you separate yourself a little more (in the standings) and you send a message. It’s perfect.”

All that was missing to complete the throwback feel was a mess of gloves on the ice. In the ’80s, both penalty boxes would have been crammed in the late stages.

This wasn’t just a win, although Monday’s water-cooler banter might have been much different if not for Jacob Markstrom’s superb pad save to rob Evander Kane of a could-be tying tally early in the third.

It was, in the end, a walloping.

Shortly after Dube roofed a shot with under six minutes remaining in regulation, the top-notch game-presentation staff cranked Dolly Parton’s 9 to 5.

The fans who showed up in red responded with chants of ‘We want 10! We want 10!’

The Flames have twice hit double digits against their provincial foes — once way back in 1981, spurred by Ken Houston’s hat-trick and a five-point outburst from Guy Chouinard, and again in 1990 when Sergei Makarov set a single-game franchise record with an incredible 2-5-7 stat-line.

They ultimately settled for nine on Saturday, all at even-strength, and moved 11 points up on their neighbours in their perch atop the Pacific Division.

“I thought the craziest part was that I think it was 6-5 and I looked at the clock and there was, like, 10 minutes left in the second period,” Tkachuk said during a post-game presser.

Fresh off a four-point night, he then reached for a scoring summary to confirm that timeline was accurate.

“I can’t even … There’s too much on this,” Tkachuk said, nudging the piece of paper back out of his line of sight. “I can’t even read it.”

The Oilers probably preferred that their stack of game sheets Saturday was delivered straight to a recycle bin.

Leon Draisaitl managed a rare combo — he notched a hat-trick and yet was stuck with a miserable minus-4 rating. Connor McDavid also finished four strokes south of even, the worst mark of his career.

“Obviously, both sides will remember what happened in this game. One try will try to shut it out,” McDonald said. “But they’re still a dangerous team, to score five goals. And lots of times, five goals for that team should be enough obviously to win. It takes me back to when Grant Fuhr played. You could score five on him, but he would slam the door at that point, and their team was good enough to score seven.

“That wasn’t the case (Saturday), and I’m sure for all the alumni, every one of us loved it and can’t wait for the next one.”

The hope, and this goes for many on either side of Red Deer, is we’ll only be waiting until late May.

It’s not far-fetched to think the Flames and Oilers — currently sitting first and third, respectively, in the Pacific — could meet in the second round of the playoffs.

They’re long overdue. It would mark their first spring showdown since 1991.

These Alberta adversaries wound up splitting a four-game regular-season series in 2021-22, each protecting their own home ice.

“The message, for me, was just to win that game,” McDonald said of Saturday’s shellacking. “It didn’t matter by how many, because there’s a pretty good chance that you’re going to meet each other somewhere down the road. And that’s why this game was as important as it was.

“But we can never get ahead of ourselves because whoever you play in that first round, that first round is always the hardest,” he cautioned. “Because most times, going in, both sides are healthy. And to get out of it, it’s going to take a heck of an effort. So don’t look too far down the road. I’m sure that is Darryl’s philosophy all the time — we’re just playing one game at a time, one shift at a time.”

The Flames will return to action with Tuesday’s home date against the Colorado Avalanche (7 p.m. MT, Sportsnet West/Sportsnet 960 The Fan), a clash of the two division leaders in the Western Conference.