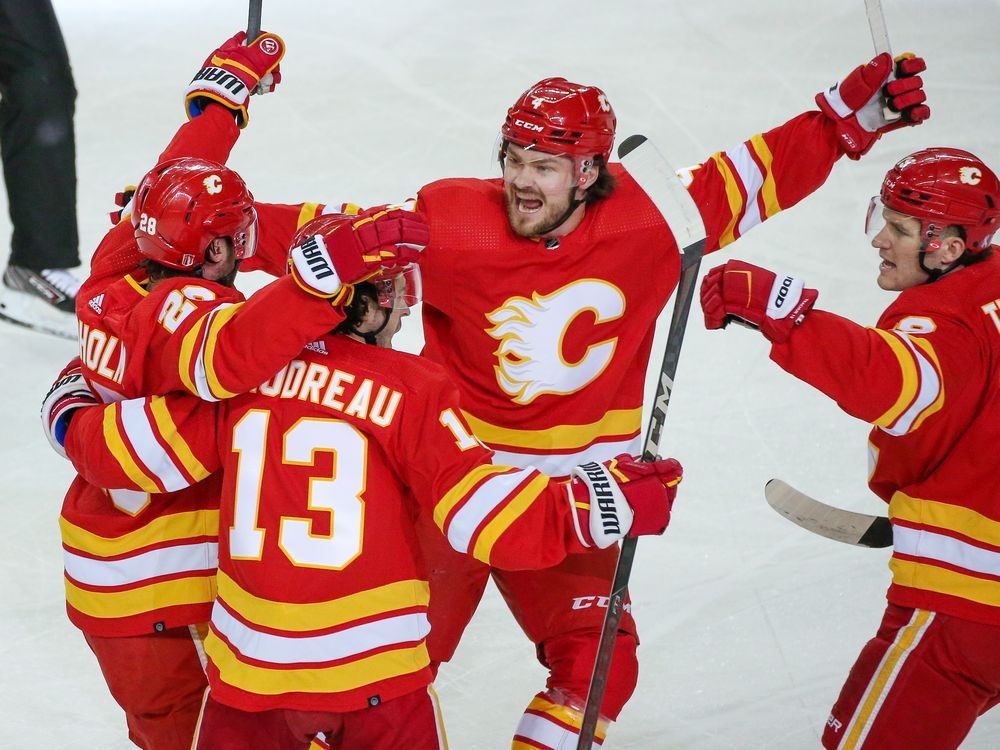 Calgary Flames coach Darryl Sutter had warned there could be a whack of whistles in Game 1.

Words of wisdom from his decades of behind-the-bench experience in the Stanley Cup playoffs?

“I don’t imagine they’re just going to turn it off for this game,” Sutter said prior to Tuesday’s series-opener against the Dallas Stars. “Last night is a history lesson, so you pass it on.”

The Flames might need another reminder, but they managed to prevail in in a penalty-filled affair, scratching out a 1-0 victory and drawing first blood in this best-of-seven showdown with the Stars.

The hosts were a perfect five-for-five on the penalty-kill, while centre Elias Lindholm cashed on a first-period man-advantage.

That turned out to be the difference.

Jacob Markstrom, with a 16-save shutout in the home crease, made sure of it.

There was plenty of intensity Tuesday. There was oodles of emotion. There just wasn’t a whole lot of rhythm.

All told, the men in stripes dished out 10 minors — five per side.

Ahead of Thursday’s Game 2 (8 p.m. MT, Sportsnet/Sportsnet 960 The Fan), both squads will talk endlessly about the need to be more disciplined.

With the building going berserk, the locals couldn’t have scripted a much better start.

A dozen seconds after the opening faceoff, Matthew Tkachuk barreled into John Klingberg on the forecheck.

On his first shift of the evening, Dillon Dube drilled Tyler Seguin along the side boards.

The Flames earned a power-play less than five minutes in — Jani Hakanpaa was called for a check-to-the-head on Blake Coleman — and capitalized almost immediately. Lindholm outmuscled Radek Faksa on a faceoff and drifted toward his usual sweet spot, ripping a one-timer to cap a passing sequence that included both Tkachuk and Johnny Gaudreau.

The Stars, meanwhile, didn’t register a single shot for the first 11 minutes and change. They finished with a grand total of two in the opening frame.

The Flames’ early work proved to be crucial as there wasn’t another lamp-lighting for the remainder of the night.

Markstrom led the NHL with nine shutouts during the regular season and picked up right where he left off. He was saluted as Tuesday’s first star.

At the opposite end, Jake Oettinger made 25 saves for the Stars.

The return of high-stakes spring hockey to the Saddledome.

This was long overdue.

The old barn hasn’t rocked like this for more than three years, since before the pandemic. While there are a lot of fans who show up to every single game in a replica jersey, the C of Red truly lives up to that name in the playoffs, when you’ll seldom spot anybody who isn’t wearing the same colour as the home team.

“This is what we’ve been waiting for all year — to get here, to get to this point and to finally start playing,” said Flames rearguard Rasmus Andersson, whose night ended with an early shower. “It’s something you have to just take in and really enjoy it, for sure. It’s special.

“It gives you the chills, gives you a little bit of the goosebumps. It’s fun. We’re all really excited to get going here.”

You could tell that 19,289 spectators — those lucky enough to score tickets to Game 1 — were feeling the exact same way.

Tuesday marked the first playoff clash in Calgary’s home rink since April of 2019.

The last time the locals earned a post-season spot, the Stanley Cup tournament was contested in a bubble. That was more like a sea of silence.

“We know this place is gonna rock tonight. Our place will rock when we go back,” said Stars skipper Rick Bowness. “The fans bring the excitement to a whole other level. In the bubble, I felt bad for the refs because any time anyone said anything on the bench, everyone in the whole rink heard it, right? That won’t be the case tonight.”

Both squads were forced to play the final two periods Tuesday without a workhorse defenceman — Andersson and Klingberg were assessed game misconduct penalties for the second fight at the same stoppage. They dropped their mitts at the end of the first, mere moments after a tussle between Tkachuk and Michael Raffl. The 25-year-old Andersson skates on the first pairing, quarterbacks the top power-play unit and was Calgary’s icetime leader during the regular season, so this was a significant loss … Recapping an eventful night for Coleman, who is shooting for a personal three-peat after back-to-back titles with the Tampa Bay Lightning — a trip to the locker-room after that high hit by Hakanpaa, a game-high hits, two sits in the sin bin and one coulda-been goal that was waved off because he’d been busted for interference … As the last man back to defend a shorthanded two-on-one, Gaudreau managed to break up an attempted saucer pass from Roope Hintz to Vladislav Namestnikov. Recognizing both the hustle and handiwork, some in the home crowd showed their appreciation by chanting ‘MVP! MVP!’