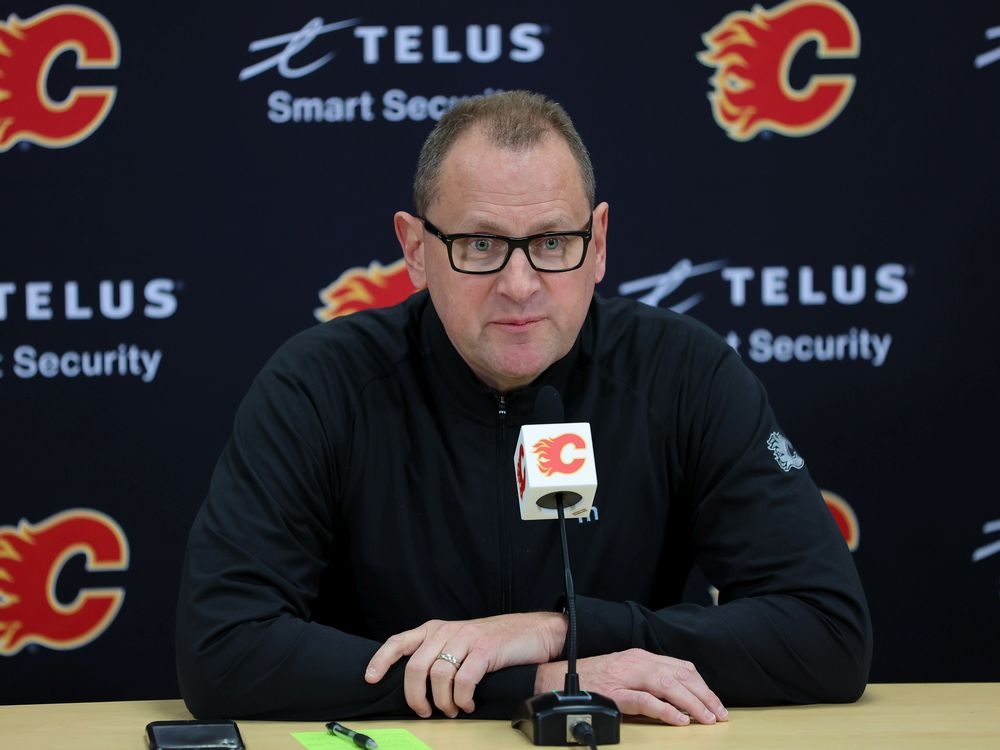 Johnny Gaudreau gushed about the city and the fan-base. Six weeks out from unrestricted free agency, the superstar left-winger talked about raising a championship banner at the Saddledome.

“I think that would be pretty special — to win a Cup here,” he said.

A few minutes later, as the Calgary Flames cycled Saturday through their goodbyes, exit interviews and one final team meeting, Matthew Tkachuk told reporters that he’d “absolutely” be open to a long-term contract extension.

If Andrew Mangiapane — like Tkachuk, a restricted free agent this summer — had a turn at the microphone, he would have been saying the same thing.

Some of the depth dudes, the likes of Erik Gudbranson and Calle Jarnkrok and Nikita Zadorov, presumably would have declared their own desire to return in the fall on new deals.

“Everyone wants to be back here,” Gaudreau said. “We had such a good group. Obviously, guys are going to talk and hope that we can get as many people back as we can.”

Over to you, Brad Treliving.

The Flames’ general manager has a humdinger of an off-season to-do list. He might as well put his golf clubs and boogie board up for sale on Kijiji.

If he isn’t re-upped prior to the July 13 frenzy, Gaudreau will be the biggest name in the NHL’s free-agent pool. It’s not too often that a 100-point player hits the market — and this puck-whiz just piled up 115.

Tkachuk, Mangiapane and breakout blue-liner Oliver Kylington headline Calgary’s list of RFAs, and all are coming off their finest campaigns. They’ll each require a raise.

Those four combined in 2021-22 to chew up about US$17 million in salary-cap space. If Treliving can lock ’em all up, what’s that number next season? Closer to $27 million? Maybe more?

Like most NHL teams, the Flames are facing a cap crunch, so that won’t leave a lot of loot to bring back some of their down-the-lineup glue guys. Beyond Johnny, the list of pending unrestricted free agents includes third-pairing thumpers Gudbranson and Zadorov and bottom-six centres Jarnkrok and Trevor Lewis. They either need to be re-signed or replaced. Neither option is free.

The Flames credited so much of their regular-season success — 50 wins is nothing to sneeze at — to the depth of their roster, to their ability to count on everybody. Will that remain a strength after Treliving is done negotiating with his top-end talents? Can he not only stretch his dollars, but somehow manage to bolster a squad that was still 11 wins shy of the ultimate goal?

“We’ve touched base with all the agents, all the representatives, and basically all the players and have kept them in the loop of what’s going on,” Treliving said, addressing his crop of soon-to-be free agents during Saturday’s end-of-season presser at the Saddledome. “Every contract is intertwined, in terms of you live in a cap world where you have 23 mouths to feed. You treat everybody fairly, but not everybody gets treated the same or they’d all make the same. It’s a puzzle.”

There’s no doubt that Gaudreau is the centrepiece.

As Tkachuk, also poised for a major payday, put it: “He’s been kind of a cornerstone player here since he’s come into the league. He is one of the best players in the NHL, and maybe the best passer. I can sit here for hours and talk about what a great player he is and what he means to our team.”

Treliving is pushing hard to keep the ace playmaker around. Johnny confirmed as much.

And what about his teammates? Do they lobby to ensure their buddy is back in the Flaming C next season?

“If it’s Johnny Gaudreau, you do,” quipped fellow forward Blake Coleman, signed for another half-decade at the Saddledome. “He’s such a big part of this team. In my talks with him, trying to have him understand what a legacy he could leave in Calgary if he stays. You could probably already put his jersey up in the rafters. Eight more years of Johnny, he’d be cemented forever. And I think that’s something that is important to him.”

There was optimism the 2021-22 Flames could be legacy-leavers.

Certainly, when the sting subsides, there’s plenty to be proud of.

At the end of the 82-game slate, they were perched atop the Pacific Division standings. Most of the key pieces put up career-best offensive numbers. As a collective, they posted some of the best defensive stats in the NHL.

And the Flames did win a playoff round — finally — before being bounced by the arch-enemy Edmonton Oilers in a Battle of Alberta series that lasted just five games.

“I believe in that group,” said Treliving, who reminded that a big reason for their improvement this season was internal growth. “We have work to do this summer. We have to find a way to be better. Staying the same is death. So you have to get better.”

That’s what makes this off-season so daunting for Treliving.

Some would argue that staying the same is the best-case scenario for the Flames, that this might be the best and deepest roster assembled at the Saddledome for several years to come.

Everybody apparently wants to stay. Everybody will likely want a raise, too.

“The fact that we have people that need new contracts that are top players, that’s always a challenge” Treliving said. “But there were challenges a year ago. Last year, we sat here and we were going through an expansion draft and we had to make a difficult decision with our captain, right? There are going to be challenges a year from now. All 31 other teams have challenges. That’s just the nature of the business.

“You just put your head down and pick away at each file and you try and make your team better every year. That’s my job.”