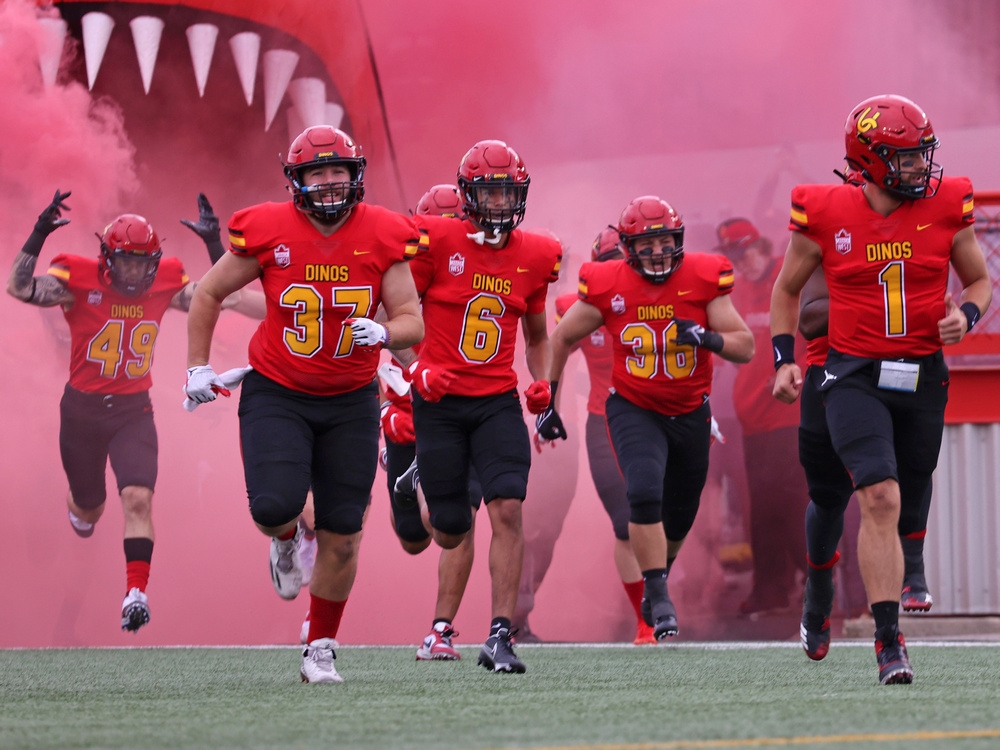 To have a rather normal start to the year has been a refreshing feeling for the University of Calgary Dinos football team at McMahon Stadium.

The Dinos kicked off training camp last week, giving them a chance to put 2021 in their rearview mirror and see how their new-look squad is shaping up.

“We’re starting on time, and we had our winter training like we normally do and got through the summer,” said Dinos head coach Wayne Harris, who begins his eighth season at the helm of the program. “It is definitely better than what we had to do last year where everything was really rushed and there were no opportunities to progress, adapt and change.

“We were under the clock the entire time.”

It would be difficult to find another U SPORTS football program that was more heavily impacted by COVID-19. Coming off a Vanier Cup championship in 2019, the Dinos would have returned many of their key pieces for a title defence in 2020.

But two years after that national championship, once graduations and opportunities in the Canadian Football League ate away at their core, the 2021 Dinos were left a few pieces short and saw a streak of 13 straight playoff appearances come to an end.

In this past off-season, following the departure of Pat Sheahan, Harris promoted Matt Berry to assistant head coach and Jabari Arthur to offensive coordinator.

During training camp, they are looking to replace an assortment of graduated players on both sides of the ball, including quarterback Josiah Joseph. Vacancies were also left by twin receivers Jalen Philpot and Tyson Philpot, and defensive lineman Jacob Plamondon, who cracked CFL rosters after being selected in this May’s draft.

“Last year we had a very young defence and had some young guys starting in positions that maybe weren’t quite ready, but we were forced into those situations through COVID,” explained Harris. “Now those guys have all that experience and are bringing it back with them and we can see a big improvement in their play.”

Those more experienced returning players, along with the incoming class of freshmen, will face their first test on Wednesday at the Kalamalka Bowl in Vernon, B.C. (8 p.m. MT).

The Dinos and UBC Thunderbirds will meet for a non-conference matchup in the first-ever U SPORTS football game in the Northern Okanagan.

The Kalamalka Bowl, at the Greater Vernon Athletics Park, will be a homecoming for several players on both teams who have roots in the Vernon and Kelowna area.

“It will be fun for the guys, especially with the number of players we have from there. I expect there will be a lot of excitement throughout the town, and this is a great opportunity for us to play an exhibition game and get the team together on the road,” said Harris. “We’re going to be evaluating a lot of guys — there are some really great additions. As we continue along, we will be able to tell the difference between who is ready and who is not.”

The annual unofficial beginning of the Dinos’ season will see the return of the Student Union Fun Zone outside McMahon Stadium as part of UCalgary’s Celebrate Something to welcome back alumni from 2020 and 2021. Tickets are available at godinos.com/buytickets.