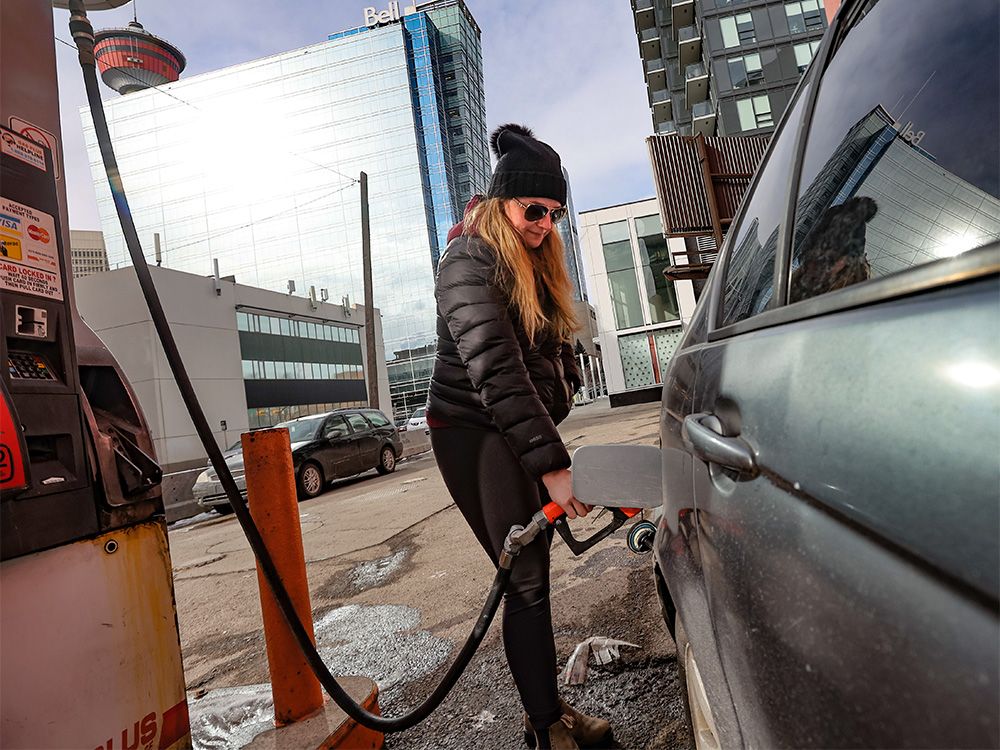 This is one of those moments that show how weird and inexplicable Alberta’s economy can be to other Canadians.

Rising oil prices impose higher costs everywhere, but they spin off so much Alberta royalty revenue that the government can afford to shield Albertans from the higher costs.

Alberta still has the lowest gasoline prices in Canada, if you dare to call $1.59 per litre low.

But it’s Albertans who suddenly get a price break — a 13-cent-per-litre reduction coming April 1, thanks to Premier Jason Kenney’s move to stop collecting provincial fuel tax.

The national price disparity will soon become even more dramatic.

Then there’s Alberta, suddenly the luckiest place to be in Canada, again.

Even before the tax break takes effect, a litre cost $1.55-$1.57 at many Calgary stations on Monday, although some were over $1.65. Edmonton was slightly lower, with most stations charging below $1.55 a litre.

Saskatchewan prices are on a level with Alberta’s; Manitoba’s are about five cents higher.

But in major parts of B.C., people are paying 40 cents more than the folks in three western provinces.

The federal carbon tax hike of nearly three cents per litre, also set for April 1, is going to further exacerbate the spike, and even slightly dilute the effect of Alberta’s tax break.

Gloating does not enhance the province’s charm rating, especially when a horrible invasion is behind much of the current price spike.

But there is temptation as Kenney heads toward a crucial leadership review in one month.

On Monday he flailed at the Trudeau government for inflationary borrowing and excoriated Rachel Notley’s NDP for its complicity in carbon tax.

He generally sounded like a leader who never ran a deficit himself, although he’s produced two whoppers. Kenney finally had his peak Ralph Klein moment and he wasn’t going to waste it.

But Albertans with several years on the clock know that nothing invites another oil price crash like Alberta government hubris. Wait for it.

For now, the fiscal picture is boggling. This year’s budget already looks outdated and it’s only two weeks old.

Almost singlehandedly, the oil surge erased last year’s original estimate of an $18-billion deficit, turning it into a balanced budget with an estimated $500 million surplus.

That’s with this year’s oil price estimated at $70 per barrel. At the current WTI level of nearly $120 — fully $50 above the estimate — the province can expect an extra $25 billion to pile up on top of the balanced budget, should that price persist for a year.

Kenney isn’t exaggerating when he says that in current conditions the province can well afford the tax break for gasoline and diesel, which will cost the treasury about $1.3 billion over a year. It’s almost pocket change in this incredibly rarified fiscal environment.

But there’s something ominously familiar about this moment.

In July of 2008, oil hit $147 a barrel. The government of former Premier Ed Stelmach, collectively orgasmic with glee, uncorked a spending gusher.

The world fiscal crisis decimated the province’s finances. There would be only one balanced budget for the next 13 years.

Many Albertans will be determined to drive today’s tank of gas right through to April 1. We can’t credibly complain about Kenney’s abolition of the fuel tax.

But we should also remember that today’s oil price spike is somewhat born of Ukraine’s suffering and death.

For those who can afford to do it, donating the tax break to Ukrainian war relief might be a very good idea.