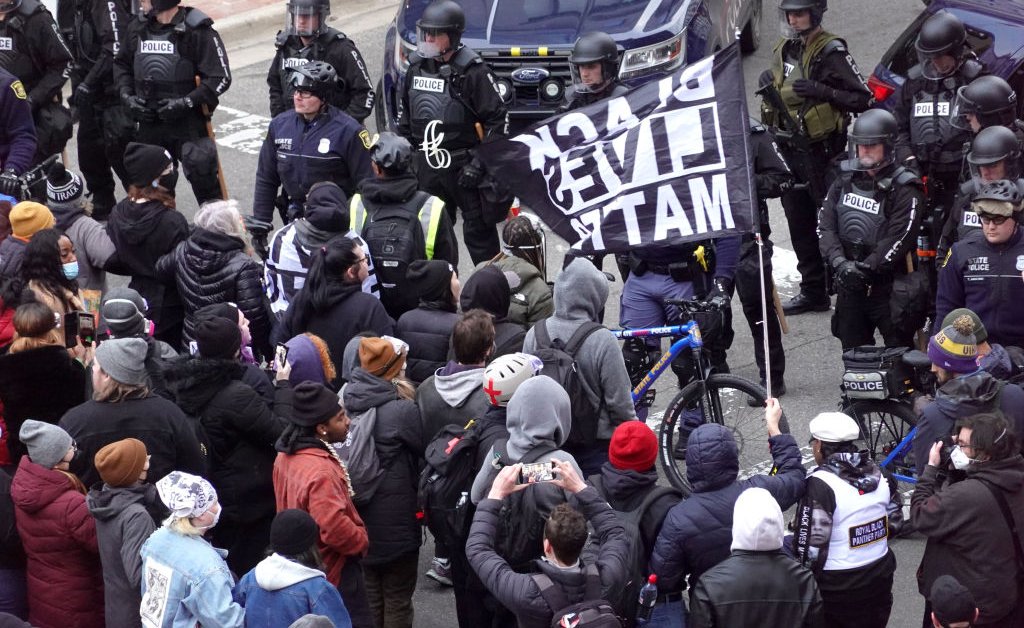 The “war on crime” is the highest-casualty, most expensive, and longest-lasting war in American history. This coordinated assault on the nation’s poorest communities has led to tens of millions of individuals locked up in cages with deadly long-term health consequences, at least 31,000 people killed directly by police, and trillions of dollars spent on pointless punishment. For over 50 years, repeated increases to public spending on police and prisons have continually bankrolled this war while failing to ensure safety, leaving the U.S. one of the least safe countries among all wealthy nations.

This reality is inseparable from the fact that U.S. public safety policy has long been misleadingly represented as if a matter of crime rates alone. This reductionistic narrative has been coupled with the manipulative message that if we feel unsafe, it is because we have not yet invested adequately in police, jails, and prisons—no matter how large their current budgets. But when safety is considered more comprehensively to include factors like homelessness and eviction, overdose risk, financial insecurity, preventable disease, police violence, and unsafe workplaces (which, statistically, present far greater preventable threats to everyday life than crime)—it is readily apparent America’s police-centric safety policies do not effectively promote shared safety.

Now, continuing the crime-war tradition and his own career-long advocacy for “tough on crime” policies, President Joe Biden is promoting his new “Safer America Plan.” This plan, announced in advance of upcoming midterm elections, appears calculated as a strategic response to widely publicized increases in crime—which have been grossly exaggerated by news media and opportunistic politicians—in marginalized communities still reeling from the social, medical, and economic devastation wrought by a mismanaged pandemic.

What does Biden’s plan propose? Consistent with his repeated calls to “fund the police” (as if false claims that police have been defunded after police murdered George Floyd were true), Biden is calling for hiring 100,000 more police officers and allocating at least an additional $13 billion to America’s police budgets—already by far the world’s largest. Although the plan also proposes support for non-police community safety programs, these funds are very likely to be sacrificed in legislative negotiations or, worse, to ultimately be routed through law enforcement agencies. By once again falsely equating police with safety, Biden is making clear that it is to the war on crime—not on poverty and the root causes of violence—that he remains devoted.

He is far from alone. Many U.S. politicians from the local to federal level remain captive to widespread anxiety that they will become vulnerable to the fear-mongering attacks launched on any candidate who doesn’t bark loud enough in endless contests about who is “toughest” on crime. To advocate for supportive care rather than for policing and punishment is regarded as a liability. And such impressions have proven well-founded. Collaborative relationships between sensationalist media, police departments, and politicians have persuaded a large proportion of voters that locking up our neighbors is the only possible way to protect our loved ones.

The recall of the reformer Chesa Boudin as San Francisco District Attorney and the ascent of former policeman Eric Adams’ to Mayor of New York City are just the latest notable examples of the electoral payoffs of sticking to traditional American “law and order” tactics while ignoring their destructive consequences. Others from Lori Lightfoot in Chicago to London Breed in San Francisco, along with the larger Democratic Party, are now pursuing similar strategies with remarkably little separation between Democrat and Republican criminal-legal agendas.

These short-sighted tactics have kept failed policy playing on repeat by reinforcing the false equation of policing and incarceration with “public safety.” Data make clear, however, that America’s policing and carceral systems neither effectively prevent crime nor protect collective safety. After over four decades of booming incarceration rates, safety in U.S. communities is considerably worse than in peer nations that, on average, incarcerate at an 85% lower rate than we do. Studies have repeatedly shown that the U.S. incarcerates far past the point of diminishing returns such that any possible benefits are far outweighed by harms. Decades of evidence reveal that incarceration not only doesn’t make us safer; it directly undermines public safety and, as the Covid-19 pandemic has underlined in bold, public health.

In the face of this reality, we need a wholesale reconceptualization of safety. For it to be just, lawmakers must stop endorsing policies that sacrifice the most marginalized members of the U.S. public for the short-term convenience of the most privileged. For it to be effective, they need to wake up to the reality that no one will be truly safe until we focus public resources on repairing the harm that policing and mass incarceration have inflicted on America’s most dispossessed communities.

In a national context in which jails and prisons are a revolving door through which tens of millions of people have passed in both directions over the last two decades alone, the long-term economic, medical, and psychological harm that incarceration inflicts disseminates into families, communities, and throughout the country. This decimates national public health, increases crime, deepens racial inequality, and initiates a spiral of unsafety.

The truth is that neither policing nor punishment can serve as substitutes for care. Safety requires constructive investments in communities and individuals, not destructive punishment. To make American neighborhoods safe, we need to start investing in what evidence shows actually works.

A large body of research has repeatedly demonstrated that a wide range of supportive public services—from emergency financial assistance and guaranteed basic income programs to summer jobs programs and neighborhood beautification—are very effective at preventing violence and protecting community safety. A slew of recent studies show that healthcare access, in particular, is one of the most important public services for building shared safety.

In studies released just this year alone, one found that men who lose access to Medicaid are 14% more likely to be incarcerated over the subsequent two years; this goes up to 21% for people with histories of psychiatric conditions. A second showed that increased access to healthcare and through Medicaid expansion for formerly incarcerated people substantially reduces rates of rearrest, with 16% reductions in violent crime observed over the two years following release. And a third found that arrests significantly declined after the Affordable Care Act (ACA), with a 25–41% drop in drug arrests and 19–29% decrease in violence-related arrests in the three years following the ACA for counties that expanded Medicaid eligibility.

None of this should be surprising to lawmakers, as these findings simply reinforce three studies published in 2020. The first two showed Medicaid expansion is associated with reductions in burglary, vehicle theft, homicide, robbery, and assault, resulting in significant cost savings—on the scale of many billions of dollars—that offset the public cost of ensuring a right to healthcare. The third showed that Medicaid expansion in 1990 that provided increased healthcare access for Black children led to a 5% reduction in their rate of incarceration by age 28, primarily due to reductions in financially motivated crimes.

Within healthcare writ large, access to mental healthcare and addiction treatment are especially significant determinants of precarity and associated risk-taking criminal behavior. This is evident, for example, in a 2021 study that showed expanding outpatient mental healthcare offices substantially reduces crime and crime-associated costs to communities. And two recent studies show that expanding access to substance use treatment has parallel crime-reducing effects.

Replacing Punishment with Care Will Benefit Everyone

If providing healthcare prevents crime, violence, and incarceration, then logic suggests that refusing to ensure a right to healthcare leads to the opposite: more crime, violence, and incarceration. And the data bear this out. According to a recent report on the health status of incarcerated people, 50% of individuals in state prisons as of 2016 were without health insurance at the time of their arrest. By comparison, only 9% of the overall U.S. population was uninsured in that same time period.

America’s for-profit healthcare system is failing abysmally to provide basic care for U.S. residents. This is widely acknowledged, but the fact that these health policy failures are a major driver of a profound lack of safety in U.S. communities, widespread public distrust, and obscene rates of gun violence remains just as widely ignored.

Lack of safety in American communities is inseparable from the reality that, for the last 25 years, the U.S. has remained the world’s only industrialized nation to refuse to provide universal healthcare as a fundamental public service to its citizens. Given that universal healthcare is clearly essential for shared safety and that few political issues have been more widely discussed in recent months than crime and gun violence, we might reasonably expect that lawmakers from both sides of the aisle would be devoted to ensuring universal healthcare access as a key crime prevention and safety-building policy.

Unfortunately, U.S. lawmakers are not only not expanding healthcare access; they’re now shrinking it while instead pouring ever-more money into already bloated police and prison budgets. According to estimates from the Centers for Disease Control and Prevention, there were more than 31 million U.S. residents without health insurance as of late 2021. With the end of the federal government’s Covid-related emergency provisions, up to 15 million more people are now set to join the ranks of the uninsured. Although the passage of the important Inflation Reduction Act includes subsidies sufficient to prevent 3.1 million people from losing health insurance coverage in 2023, it is far from adequate to meet the reality of ongoing healthcare exclusion in America.

History leaves little doubt that millions of those who are excluded from care by our lawmakers’ policy choices will, in the coming years, fall into crises that for some will lead to petty crimes, substance use and overdose, and acts of violence. And in this way, America’s racist cycles of violence, incarceration, and poverty will continue for as long as lawmakers remain committed to the delusion that police and prisons could ever produce safety in a nation that refuses to provide adequate care for its residents.

To stop these cycles and to begin to repair the harm they’ve left in their wake, U.S. lawmakers and their journalistic enablers need to reject the fear-mongering politics of crime and embrace in its place a politics and economy of care. In the process, we must collectively reimagine the meaning of shared safety, how we measure it, and who is responsible for ensuring it and by what means. Only then can we achieve it together by dismantling harmful systems of retributive punishment and building public systems of reparative support in their place.