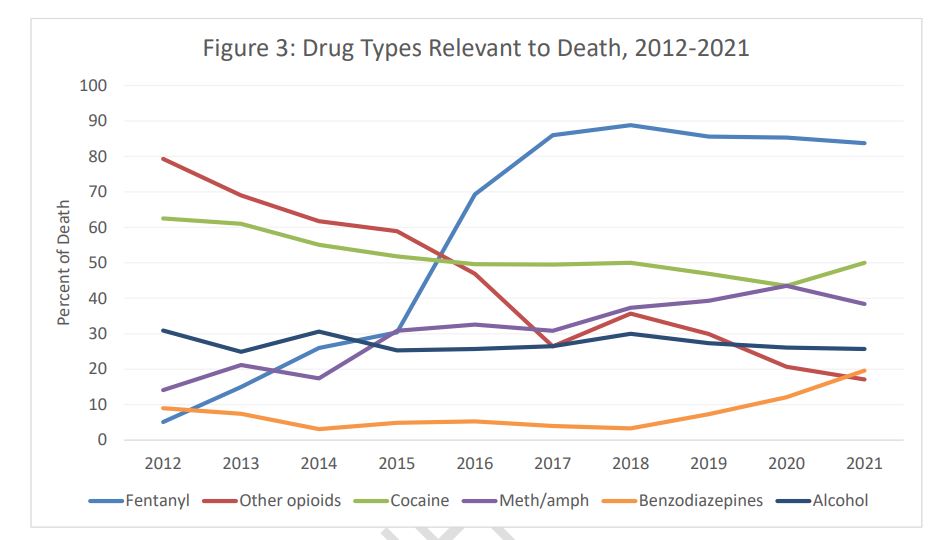 March was another catastrophic month for toxic drug deaths in B.C., as the crisis carries on with no end in sight.

The BC Coroners Service reports 165 people lost their lives to toxic drugs last month. This equates to more than five deaths per day, the second-highest ever recorded in the month of March.

Of drug samples which tested positive, the Service reports 94 per cent had fentanyl or its equivalents.

The number of suspected illicit drug toxicity deaths in March was a five per cent decrease both month-over-month and year-over-year.

Vancouver, Surrey, and Victoria are seeing the highest number of deaths.

The BC Coroners Service says the people most likely to die of toxic drugs are men aged 30 to 59. However, it notes death rates among people aged 40 to 59 did rise in March.

“The proportion of deaths that are 50+ years of age has steadily increased year after year for the past 6 years. In 2022, 38% of decedents were at least 50 years old,” reads the report.

It adds most deaths happen in homes and no deaths have been reported at supervised consumption or drug overdose prevention sites.

“There is no indication that prescribed safe supply is contributing to illicit drug deaths.”

April 14 marked six years since B.C. declared a public health emergency due to the opioid crisis. Since then, more than 9,400 people have died, and experts say the toxicity of drugs has only gotten worse.

B.C.’s mental health and addictions minister says the province is doing everything in its power to address the crisis, adding “There’s no single magic bullet” to fixing it.