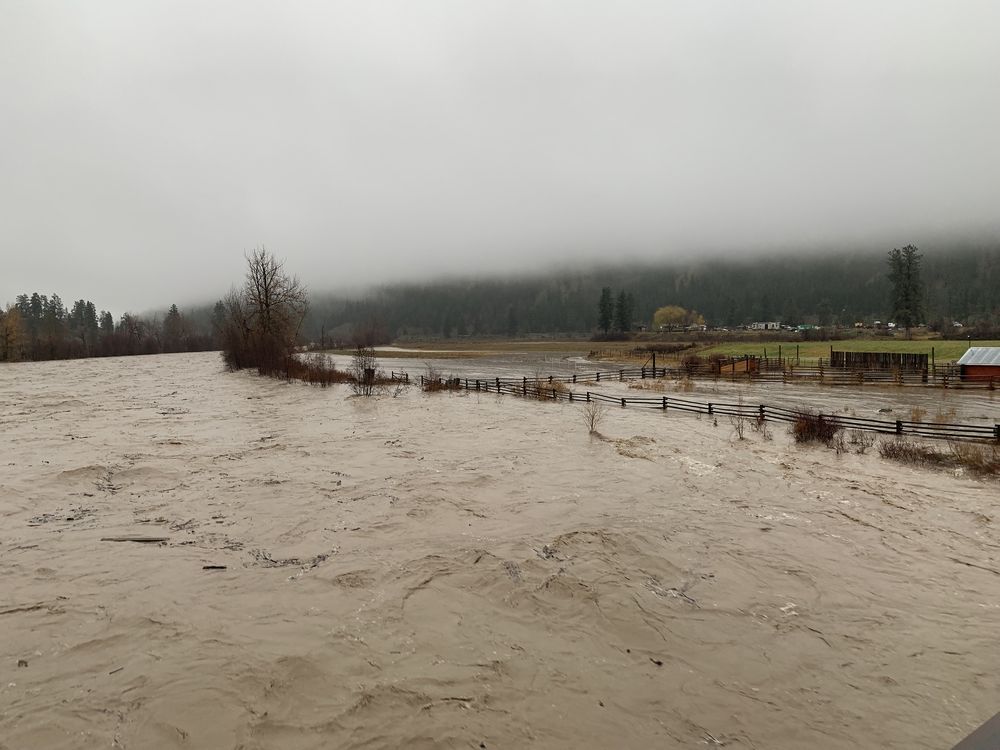 MERRITT — Alanna Cowan has watched the Nicola River in British Columbia’s Interior turn the colour of chocolate milk and rise every spring, as warm weather melts snow from the surrounding mountains.

It is part of an annual cycle that can cause minor flooding, but Cowan said this year feels more uncertain.

“When we talk to our elders, you know, and look back in history, (there’s) nothing like this,” she said of the disasters that forced Cowan from her home twice last year.

“Everybody’s wondering, when spring thaw happens here, what’s coming down off that mountain and how hard is it going to come down?”

The Nicola Valley is one of many regions in British Columbia still recovering from last year’s extreme weather as the thaw begins.

Although the federal and provincial governments have pledged funds to guard communities from the effects of climate change, most protection measures won’t be in place in time for this season.

Forecasters say it’s difficult to predict flooding more than a few days in advance so residents should always be prepared.

“There are changes this year that may alter the kind of risks that are out there,” said Dave Campbell, head of B.C.’s River Forecast Centre.

Spring flooding generally depends on a combination of factors, including the level of snowpack, temperature and other variables like heavy rainfall, he said. It typically peaks in May and June.

The forecast centre’s monthly report released April 8 says there is a slightly elevated risk of freshet-related flooding this spring depending on weather, with snowpack levels averaging near normal across the province.

However, regions of British Columbia that experienced both wildfires and floods, like the Fraser Canyon or Nicola River and their tributaries, have “overlapping risks,” Campbell said.

Snowmelt runs over scorched land more rapidly, for example. And rivers like the Nicola that changed course and filled with sediment will make predictions more challenging, he said.

“We try to focus mostly on the flow side of things because that’s what we can get a handle on, but when there is a channel change, it can be very difficult to understand the flow, what that means for the on-the-ground conditions,” Campbell said.

Debris flows are also possible when heavy rains hit burn zones, where the forests that once aided in soil stability and absorbed water are gone, he said.

Sekhon encouraged residents to keep an eye on forecasts, especially at the local level.

“If we see big systems coming, we can generally give a few days heads-up. But if it’s more of a localized issue — downpours, thunderstorms or these type of things — those are really something we have to monitor, right, close to that day,” he said.

Although the B.C. and federal governments have committed funds to protect communities and improve warning systems, much of their focus remains on recovery and local communities say even that money is slow to arrive.

Abbotsford Mayor Henry Braun was among 28 mayors who met with federal and provincial ministers Monday to ask about the delivery of $5 billion from Ottawa. He said the estimated cost of bringing three dikes up to provincial standards after flooding in the agricultural area of Sumas Prairie is as high as $2.9 billion, with most of the funds expected to come from the federal government.

“The ball is in their court,” Braun said.

Federal Emergency Preparedness Minister Bill Blair said he heard the concerns of mayors, but determining how to spend a limited amount of funding is complex. Engineering and environmental assessments involve “an enormous amount of work,” he said.

Blair did not provide a timeline for when the money would be dispersed to communities but said B.C. has made a preliminary submission of about $4 billion for rebuilding.

Of the $2.1 billion committed in B.C.’s 2022 budget to supporting communities against climate events, more than half is earmarked for recovery from last year’s floods.

As an example of the scale of work underway, the province’s flood debris dashboard identifies nearly 300 major pieces of wreckage ranging from vehicles to washed out bridges in river systems across southern B.C. Helicopters were set to begin clearing the debris this week.

Public Safety Minister Mike Farnworth said the province plans to have a broadcast alert system in place that sends text messages to cellphones for this year’s freshet and wildfire season after it was criticized last year for not doing so.

“We are attempting to be as prepared as possible with local communities for the freshet system this spring,” Farnworth said Monday.

Matthias Jakob, an expert in disaster mitigation and an adjunct professor at the University of British Columbia, said the changes to the ecosystem should not be underestimated.

“Rivers fundamentally changed their courses, this was a landscape-altering event,” Jakob said, who is also a consultant with BGC Engineering.

After last year’s disasters, government agencies were among those that moved quickly to get repairs and mitigation work underway, he said.

For example, warning systems for things like debris flows are being built, triggering alerts to close highways or issue evacuation alerts, he said. Work has also been done to identify railway crossings that are vulnerable to washouts or debris flows, where pilot cars can run before trains, he said.

At the same time, he said planning is needed beyond the immediate response.

“There is a lot of preparedness already put in place, but we have to realize that along quite a few of these highways or railways, the fixes done to date were emergency fixes,” he said, adding some may be more vulnerable to damage than permanent solutions.

Given the monumental cost of repairing and protecting infrastructure and communities from the effects of climate change, Jakob said that governments may need to make difficult decisions, such as abandoning land that is vulnerable to sea-level rises or in flood zones rather than trying to fortify it and focus investment elsewhere.

The rapid warming of the climate means history can’t provide guidance on how to plan for or react to disasters, he said.

“We have entered a climate that we don’t know of and that makes everything that has to do with infrastructure design extremely challenging to the point where we have to ask ourselves what is and what isn’t manageable in the future.”

Some local leaders who endured both wildfires and floods said they hadn’t had time to prepare for the freshet, just weeks before its arrival.

Chief Arnie Lampreau of the Shackan Indian Band remained evacuated from his own home along Highway 8 between Spences Bridge and Merritt after flooding destroyed much of the roadway in November.

In March, Lampreau said he had been so busy with recovery work that there hadn’t been a moment to prepare for the freshet.

“We haven’t even had time to exhale long enough to build a new plan,” he said.