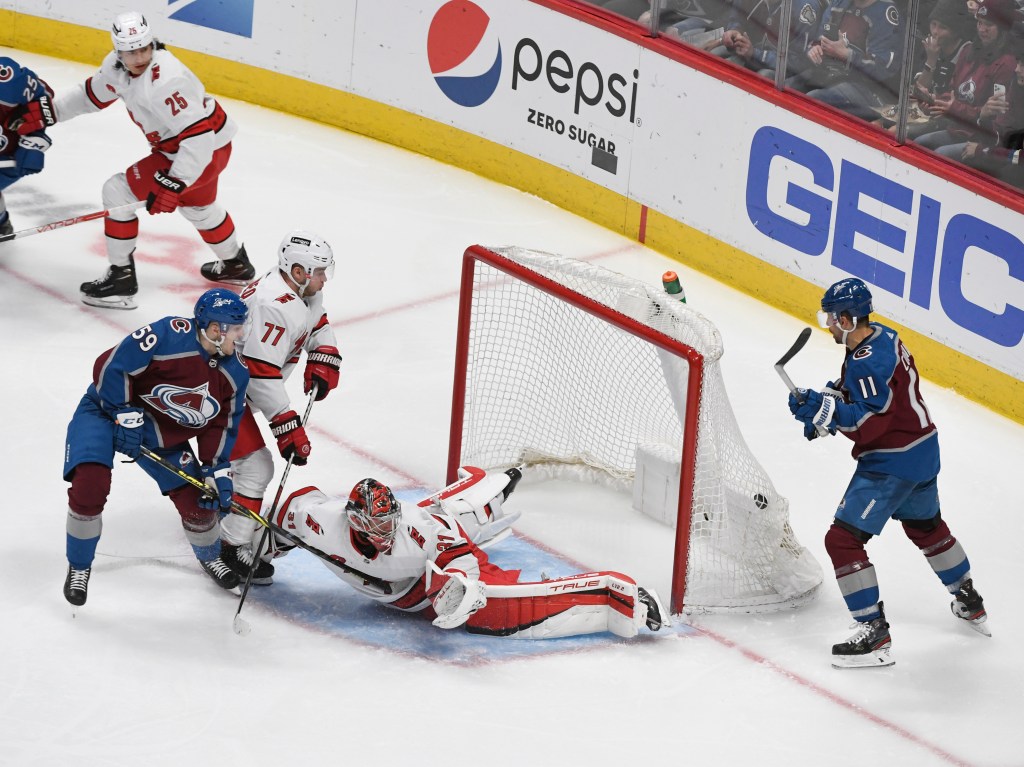 The first game between Colorado and Carolina featured two goals, including one on an empty net last month in Raleigh, N.C.

The rematch was a heavyweight shootout Saturday night at Ball Arena, with the Avalanche skating off a 7-4 winner in a wild one over the Hurricanes.

It was goals galore for the Avs, who were held scoreless five weeks ago in Carolina. Centers Nathan MacKinnon and J.T. Compher led the way on Saturday with two goals apiece, and winger Mikko Rantanen had three points on a goal and two assists as Colorado reached an NHL-high 116 points — just two shy of the club’s single-season record.

The Avs (55-14-6), who extended their President’s Trophy lead over the Florida Panthers to four points, have seven remaining games.

Rantanen scored his team-leading 36th goal 4:08 into the third period to give the Avs a 6-3 lead. But the Hurricanes, once again, clawed back. They put their fourth puck behind goalie Darcy Kuemper at 6:28 from Andrei Svechnikov to get within two goals for the second time.

Colorado got back ahead by three at 11:43 when MacKinnon used a spin move to his backhand for his second goal of the game.

The Avs got goals from Compher (power play) and MacKinnon to take a 2-0 lead out of the first period. The lead grew to 4-0 within the first 2:21 of the second frame. Compher collected his second power-play goal at 1:59 off a back-door feed from Andre Burakovsky, and on the ensuing shift, just 22 seconds later, newly signed college free-agent forward Ben Meyers scored in his NHL debut.

The Avs threw out their fourth line after Compher’s power-play goal and Meyers, who was centering the line, back-handed a behind-the-net feed from linemate Logan O’Connor. Meyers signed with the Avs out of Minnesota, after leading the Golden Gophers to the NCAA Frozen Four in Boston.

Colorado’s commanding 4-0 lead didn’t last long. On the first shift after Meyers’ goal, Hurricanes captain Jordan Staal redirected a blue-line blast past Kuemper. And then at 8:44 of the period, Carolina got within 4-2 on Staal’s second redirection goal.

The teams traded goals through the rest of the period in what became a six-goal frame. The Avs took a 5-3 lead into the third but probably didn’t feel comfortable with just a two-goal advantage.

Footnotes. Meyers led Colorado to the ice for warmup and, per tradition, skated alone for a couple laps before the rest of the team joined him. … Defenseman Erik Johnson was the Avs’ lone healthy scratch. He and defenseman Jack Johnson are swapping out spots on the third pairing. … Colorado left wing and team captain Gabe Landeskog has begun skating in his recovery from knee surgery. He skated before the full-team morning skate Saturday. Second-line center Nazem Kadri, who has missed the last seven games with an upper-body injury, joined the full group in a non-contact jersey. He might be cleared for Monday’s game against the Washington Capitals.