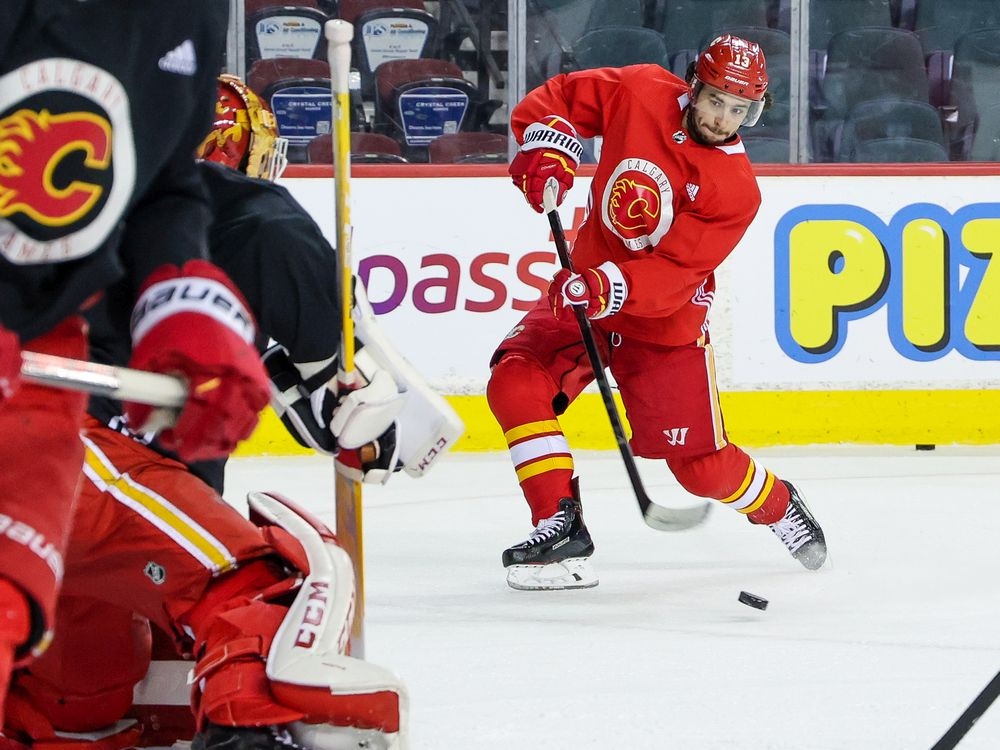 Johnny Gaudreau had just piled up a career-high five assists, a puck-on-a-string performance that left a pair of rival superstars with matching minus-four ratings.

So, coach … how about those superb setups, those dandy dishes?

There you have it …

Gaudreau is not just the leading point-producer for the Flames, a 30-goal man and the ace distributor on what is arguably the most dangerous line in hockey.

He’s not only a legitimate contender for the Hart Trophy, chatter that intensified after he outduelled and out-dazzled Connor McDavid and Leon Draisaitl in the latest edition of the Battle of Alberta.

He is, according to Sutter, also the best checker on a team that, despite Saturday’s retro scoreline, prides itself on not allowing a whole lot to happen at their own end of the rink.

As the skipper summarized during that same presser: “He plays a complete game.”

Rewind just over a year, when the Jolly Rancher returned for a second stint at the Saddledome, and many worried or wondered anyway if this would be a complete mess.

Sutter and Gaudreau seemed like an awkward fit — a hard-nosed stickler for a detailed, defence-first structure and an undersized forward with a reputation, fair or not, for devoting most of his energy and attention to offence and fading when the games got especially tough.

Some wondered if Johnny would soon be checking out, traded away as part of an off-season Sutterization.

Few had “best checker” as the expected outcome.

“Why does it work?” Sutter said after Monday’s practice at the Saddledome, repeating the question. “If you have great hockey IQ and checking is about having a good stick if you’re not 200 lb., and you position yourself well, then why can’t you? He’s done that and he’s grabbed that and that’s how he has played. I mean, it’s not about what he did last year, what he did two years ago.

“The guys who score big goals are way more important than the guys who score lots of goals,” he continued. “Or the guys that are involved in five-on-five play, in terms of goals for and against at even-strength, are way more important than somebody who might have a lot of goals and is on the ice for more. It’s how you become a good hockey club is if your top guys can buy into that.”

The Flames are a good hockey club. It’s why Tuesday’s date with the Colorado Avalanche (7 p.m., Sportsnet West/Sportsnet 960 The Fan) will be billed as a battle between best in the West.

And Gaudreau is undoubtedly their top guy — with honourable mention to fellow first-liners Elias Lindholm and Matthew Tkachuk and workhorse netminder Jacob Markstrom.

Gaudreau was saluted Monday as the NHL’s second star of the week, a no-brainer nod after he splurged for two goals and eight helpers over a three-game stretch.

The 28-year-old is currently tied for third in the NHL’s scoring race with 90 points. (Heading into Monday’s action, McDavid topped the charts with the same number that’s on the back of his sweater — 97.)

Calgary’s ace playmaker leads the loop in even-strength contributions (70) and is also setting the pace for most primary assists (T-1, 44).

Perhaps most impressive is the stat that Sutter was alluding to. The Flames have outscored opponents by a 78-29 margin when Gaudreau is on the ice at five-on-five. Across the league, only Tkachuk (74-29) and Lindholm (69-29) come close to matching that differential.

If Hart Trophy ballots were due tomorrow, the Flames’ first-line left-winger would receive a lot of votes. It’s not far-fetched to think he could be a finalist, although there are at least six or seven candidates with a compelling case.

“He has been awesome. He’s a leader on our team and the way he’s played, he’s winning hockey games for us,” said Flames forward Dillon Dube of Gaudreau. “He’s stepped up a lot. He was playing against those two big guys (Saturday) for Edmonton and he stepped up. I thought he was the best player on the ice. For him to do that is, it’s really important for us.

“This time of the year, to have a player like that who can win you hockey games, it’s really important for us.”

This upcoming time of year hasn’t always brought out the best in Gaudreau, but No. 13 is about to get a chance to change that narrative.

While he’ll soon push into triple digits in points for the first time in his career, while this is already cinched as his most consistent campaign, it’s only going to get more difficult from here.

Can Sutter’s best checker continue on as a springtime wrecker? With 16 games remaining until the stats are reset, the boss seems encouraged.

“I think the biggest difference that happens as the season goes along, when you’re down into the teen games left, what you see is those teams that are used to playoff success, their games really tighten up,” Sutter said. “There’s less space, less time, there’s not as much done on the rush, things like that. It’s a deeper game. That’s where guys eventually get judged on the next part. But I think somebody like Johnny has grabbed onto that, and I think that’s why he’s played really well since the all-star game, to be quite honest.”