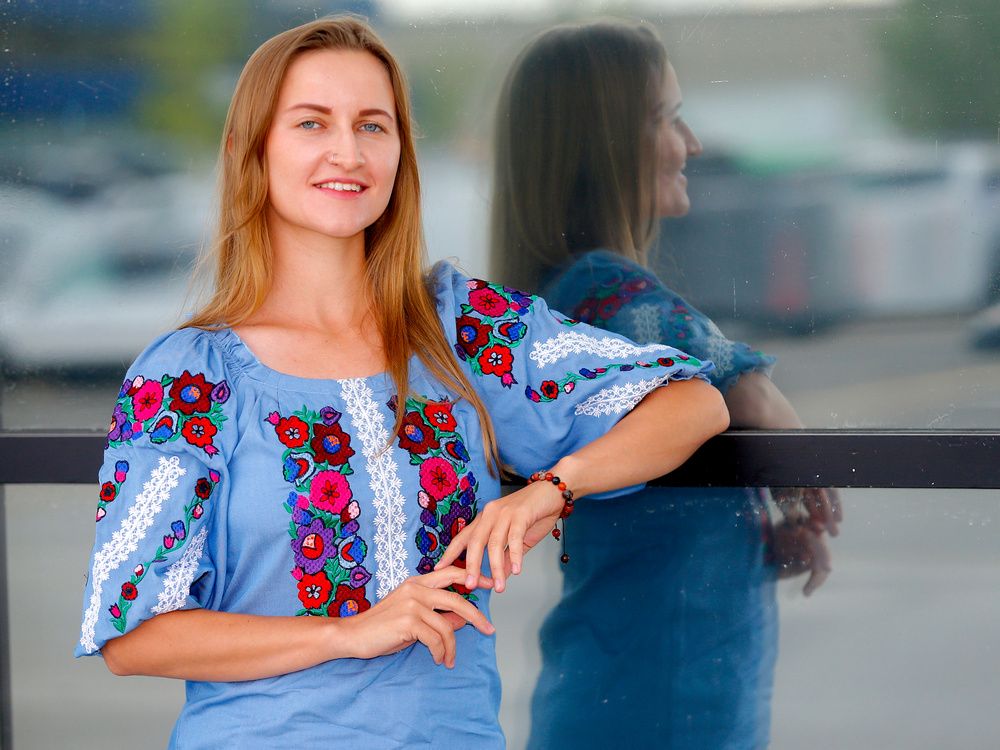 When Russian missiles first struck her hometown of Kyiv in late February, Maria Olmezova thought the crisis would pass quickly.

But as Ukraine marks six months of the Russian invasion, the 18-year-old, who arrived in Calgary in June, doesn’t expect to be going home any time soon.

“I had only one backpack for my stuff … I thought it’d be two to three weeks but it’s more time than that,” said Olmezova.

“It’s so dangerous there, nobody knows what we’ll do with all the bombs and the economy is a disaster, so I don’t know.”

Starting a new life in a distant country as a teen was initially “scary,” she said, but the pieces for building it have been falling into place.

After studying and working in fashion design in Kyiv, the young woman has been employed at a clothing store and has found lodging in Calgary’s northwest.

She’s on a waiting list to start English classes in an adopted city she says has readily accepted her.

The teen’s airfare to Calgary was provided by Alberta donors who’ve paid flight costs for 19 Ukrainians fleeing the fighting. Anyone wanting to donate can get more information by emailing bcallowconsulting@gmail.com.

Her story of adaptation is fairly typical for Ukrainian refugees, said Fariborz Birjandian, CEO of the Calgary Catholic Immigration Society.

“Many of them are getting jobs because they’re very capable and are able to speak enough English, but not all of them,” said Birjandian, adding his agency has hired several of them.

Calgary has been Alberta’s main destination for Ukrainian evacuees, absorbing well over 4,000 of them so far and there’s been considerable success in finding them accommodation, he said.

Through the efforts of individual billets, agencies like his and federal supports that have provided hotel rooms for new arrivals, none of the newcomers have had to stay in emergency shelters, said Birjandian.

“We’re in a position better than other cities in Canada,” he said.

But an expected surge of refugee arrivals over the next few months could bring 10,000 more to Calgary, which requires many more sponsors to open their doors for people seeking temporary lodging until they can find more permanent housing, he said.

“It’s always a challenge but there’s a lot of sympathy and public support and we have to build on that,” said Birjandian.

Another challenge and one more complex, he said, is addressing the mental and emotional well-being of refugees apprehensively watching the fate of loved ones they’ve left behind in a war with no apparent end.

“Finding them homes is not going to do everything for them — they’re worried about their families,” he said.

“If somebody sees their husband has been killed (in Ukraine), how do you heal that?”

The war’s six-month milestone has only reinforced a realization among many of the evacuees that they’ll reside in Canada permanently, said Kateryna Zarvii, who came to Calgary in May after leaving her hometown, Kremenchuk.

“Most people coming here want to stay here for life,” said Zarvii, adding she’s one of those.

“Some say they want to go back to Ukraine but not any time soon.”

Zarvii, who now works with the Centre for Newcomers to help settle Ukrainian refugees, said she shares the feeling of many of them after surmounting the challenges of adjusting to a new life.

“After you feel safe, you start to feel the separation from the country and loneliness,” she said.

“There’s also frustration, that you can’t do anything to stop (the war) and guilt about being in a safer place.”

Zarvii added that’s only magnified by fear for people back home  — a feeling she knows after recently speaking with family members in Ukraine who told of crossing a strategic bridge over the Dnipro River.

“When they were on the bridge, the air siren went off and that bridge is a very important target,” she said.

She noted there’ll be many more newcomers nursing those feelings in Calgary in the coming months as their numbers increase.

Zarvii said she’s noticed an increase in the flow of refugees from her homeland this month, and the more recent arrivals are having more difficulties than those who preceded them.

“There’s less accommodation for them and it’s harder for them to find a job,” she said.

On Wednesday, Ukrainians will also be marking their country’s 31st anniversary of its independence from the Soviet Union.

In Calgary, the Ukrainian Canadian Congress will hold a rally at Municipal Plaza from 7 to 8 p.m., where those who recently fled the war will lead the singing of the country’s national anthem, said spokeswoman Stephania Romaniuk.

“There’s six or seven of them who come from all corners of Ukraine … It symbolizes our community’s unity,” said Romaniuk.

“The toll the war has taken on the Ukrainian community is quite broad and quite deep … but that resolve has never flagged.”

Because Ukraine is forbidding most adult males — expected to be available for military service — from leaving the country, the majority of those reaching Canada are women and children.

As of last week, more than 130 Ukrainian newcomer students had registered with the Calgary Catholic School Division for the upcoming school year, said spokeswoman Joanna French.

“We anticipate this number will continue to increase daily,” French said in an email.

The board is mobilizing its interpreter and English language learning resources for the influx and will also provide school supplies when necessary, said French.