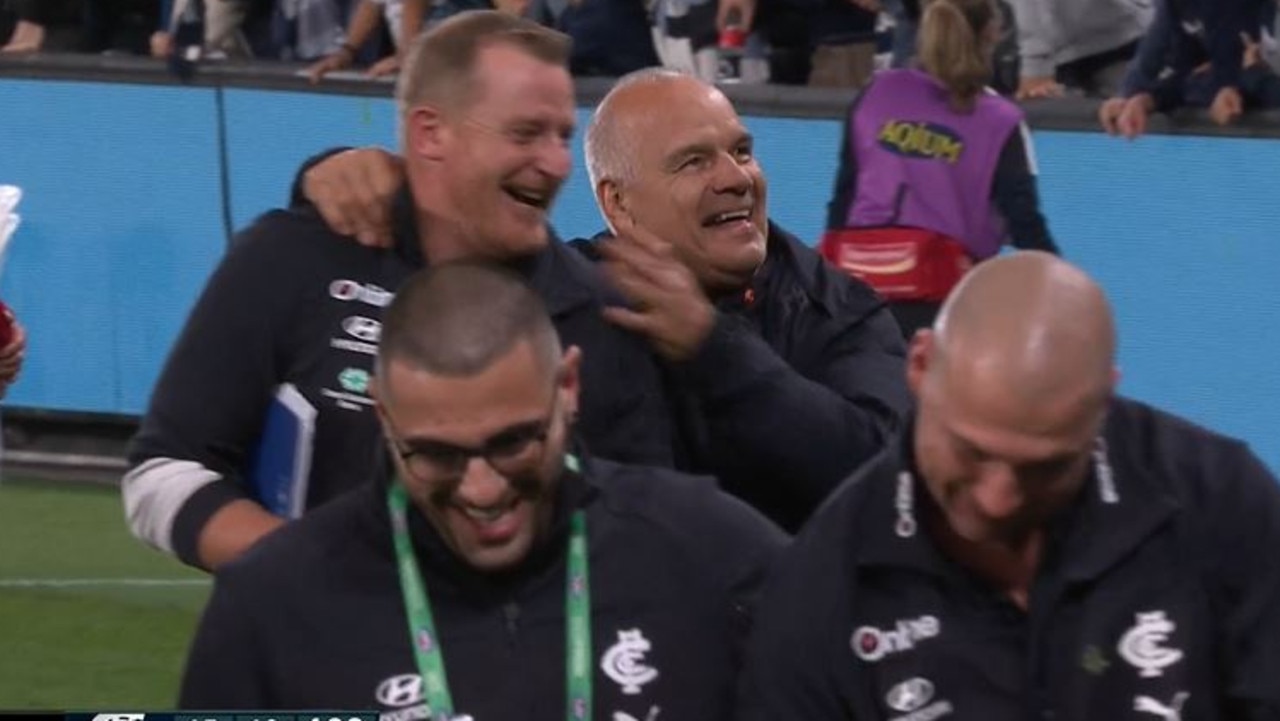 You only need to see one photo to see how Michael Voss has transformed Carlton into a legitimate premiership contender.

As Michael Voss walked around the Marvel Stadium boundary line, looked up at ecstatic Carlton fans and soaked in the atmosphere after an eighth win from 10 games, a Blues legend couldn’t hide his joy.

It was a significant moment as the proud club legend walked alongside Carlton’s new leader. For Voss has united the Blues’ playing group on the field – and the subsequent positive results have unified fans – from club greats to young fans – off it.

Eight months ago, Williams spearheaded the coaching subcommittee that ultimately appointed Voss as the Blues’ senior coach in the hope the Port Adelaide assistant could help take a talented Carlton list. On Friday night, Williams no doubt sensed the significance of the 15-point win over Sydney, which will see Carlton remain inside the top four by round’s end with an 8-2 record.

Melbourne champion Garry Lyon, with tongue slightly in cheek, labelled Michael Voss “the Messiah” post-game before adding: “How about those scenes with Greg Williams – the behind-the-scenes powerbroker with Vossy there as they ran around the boundary line. It’s great to see.

“I think what we continue to learn is the coach and the players are on this ride together. You can put in place everything you like, from a coaching point of view – ‘we want to play this way, we want to harder to play against’ – and there was a lot of build-up to this Friday night game about their ability to be hard and tough, but they were again.”

“We know where this team has been over the journey. So many false starts, so many promises, continually looking at the list and thinking they should do better and should be better … I think this is something Carlton fans … they’d be so proud.”

After significant draft hauls yet several sacked coaches – Mick Malthouse, Brendon Bolton and David Teague – Carlton was after a coach that could help a team of talented players into a champion team. Ten rounds in and the signs are promising, according to triple premiership legend Jonathan Brown.

“It was a great job for Vossy to win,” Brown told Fox Footy post-game.

“To win a premiership you need five or six A-graders and they had that on the list. Obviously it takes more than that – you’ve got to be able to put the pieces together and grow as a unit – but you‘ve got the star power. Vossy would’ve been excited about getting this group together and getting their confidence up and it’s starting to show.”

Triple premiership forward Cameron Mooney said it was “the perfect time for Vossy to take over”.

“They’ve always had the talent there, there was just something missing,” Mooney told Fox Footy Live.

“So Vossy walks in and straight away he‘s got the respect of everybody. Nobody’s coming back underdone – a couple of boys (might) come back fat and all those types of things, but no one was doing that with Vossy there. They’ve come back ready to go.

“Someone needed to pull the right reins and Vossy is doing that.”

Brown pointed out the performance of oft-maligned player Lochie O’Brien, who had an equal game-high eight touches in the fourth quarter. He said O’Brien was an example of “one of those players Michael Voss has got the best out of and starting to deliver when a lot of Carlton fans would have thought ‘I‘m not sure about that guy being in my team’”.

St Kilda champion Nick Riewoldt added: “I can‘t believe that 10 weeks in, he’s got the role players playing the roles that they’re playing. That’s the really tricky part that can take time.”

Star defender and best and fairest winner Jacob Weitering said Voss’ ability to connect with the playing had played a crucial role in the early-season success.

“I guess the best leaders are able to tell a story and he‘s been able to do that each week and get us up for games, whatever that may be.”

Weitering joked it was nice his team was only conceding 40 or 50 inside 50s per game – rather than 70 or more the Blues were often giving up in previous seasons.

“We‘ve just got a system that’s in place, both offence and defence, that’s working really,” he said. “Guys that go out, guys that come in are doing their jobs.

“It‘s an awesome atmosphere at the moment. We’re confident, but we’re humble about it.”

As for Voss himself, he claimed post-game he had no pre-season expectations around his team but never put a ceiling on his side.

“I don‘t know where I thought (we would) be. And I say that in all seriousness because the very first thing that I didn’t want to do was put a cap on where we needed to be and what we needed to do,“ Voss told reporters.

“We just had a lot of work ahead of us. But certainly with now the results that they are, I couldn‘t ask for anything more I don’t think and we’re learning as we go which is a real bonus for us.”