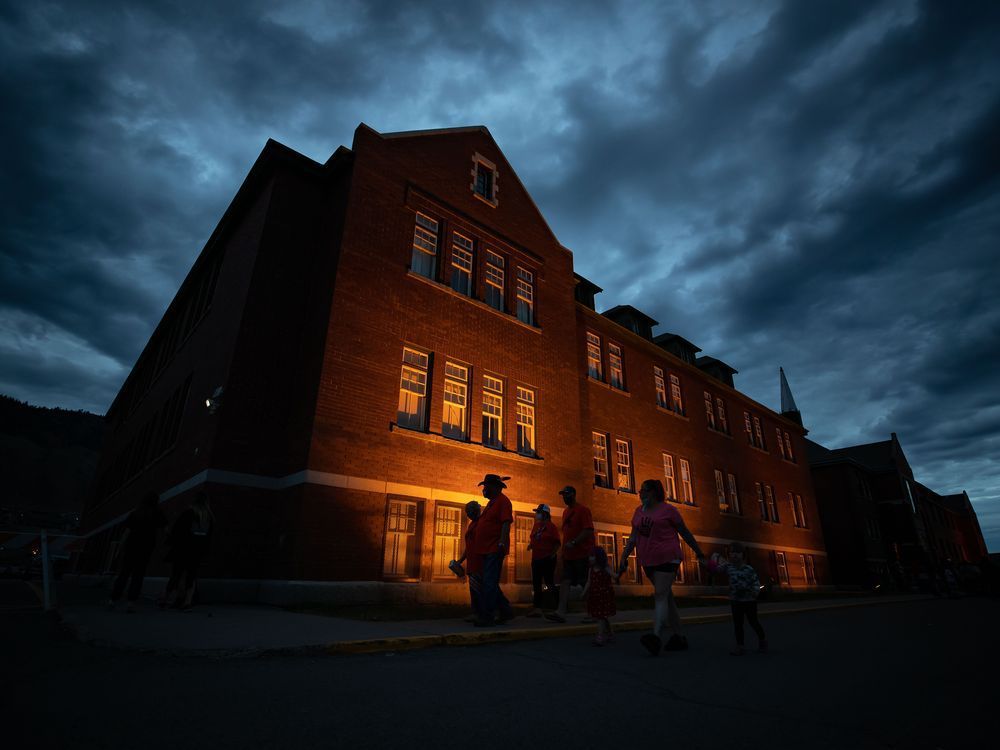 KAMLOOPS — The nightmares started last May, said Harvey McLeod, chief of the Upper Nicola Indian Band and a survivor of the former Kamloops Indian Residential School. They tormented McLeod for months after the discovery of 215 suspected unmarked graves at the school he attended for two years.

Then one night he was visited in his dreams by a young girl who set him free.

“It’s been tough on me and so wonderful at the same time,” said McLeod.

The year since the Tk’emlups te Secwepemc First Nation announced that ground-penetrating radar had located the suspected grave sites in a former apple orchard has been one of national reckoning about residential schools in Canada.

But for survivors of the residential school system it has meant much more: reawakened trauma, catharsis, and, for some, a kind of closure.

“There was a little girl by my right leg, always there,” McLeod recalled of his dream. “I’d get up and walk and she’d be holding onto my leg or my hand. It seemed like everywhere I went that little girl was there.”

The dream ended when the girl walked to a door, waved and left, he said.

“My conclusion was, ‘I’m OK now and she’s OK and she’s going to go home,’ ” said McLeod, 68. “I think she was another child at the school that looked after me and I took care of her.”

Percy Casper, 73, spent 10 years at the Kamloops school. He said he was distraught and angry when he heard the announcement.

“The last year I really had to bear down and go back to my ceremonial life and roots,” said Casper, a member of the Bonaparte Indian Band near Cache Creek. “When I first found out about the 215, I was like a rubber band. I was maxed out and I was ready to snap.”

A mother grizzly bear and three cubs watched in the distance as salmon, venison and berries were left at the sacred site. They emerged from the forest to eat the offerings as he prepared to leave, said Casper, who took their visit as a sign to find strength.

“It was up to me to revisit myself spiritually, and say, ‘Hey, you have to help yourself. You’ve got kids. You’ve got grandkids and you have people,’ ” he said. “So, I’m very proud to say I’m guilty of helping my people.”

Professor Nicole Schabus, an Indigenous and environmental law expert at Thompson Rivers University in Kamloops, said upset survivors started calling her in the hours following the announcement about the suspected graves last May.

“Immediately, it flashed the survivors back to being children again and it brought the intergenerational trauma,” she said.

Many told her about dreams of seeing little boys standing alone, said Schabus.

“It took them a long time to actually realize they were looking at themselves,” she said, adding that many survivors recognized they were ready to move on from their experiences.

Mike Arnouse, 79, spent 11 years at the Kamloops’ school. He said the past year has seen him renew his commitment to living in unity with the land.

The Adams Lake Indian Band member said residential schools were built to take Indigenous people off the land and impose the Western world on them.

The Kamloops residential school operated between 1890 and 1969, when the federal government took over operations from the Catholic Church and ran it as a day school until it closed in 1978.

A 4,000-page report in 2015 by the National Truth and Reconciliation Commission detailed harsh mistreatment at the schools, including emotional, physical and sexual abuse of children, and at least 4,100 deaths at the institutions.

The report cited records of at least 51 children dying at the Kamloops school between 1914 and 1963. Health officials in 1918 believed children at the school weren’t being adequately fed, leading to malnutrition, the report noted.

Kamloops survivor Garry Gottfriedson, 69, said the past year had been emotionally draining for the members of Tk’emlups te Secwepemc, who were unable to mourn in private.

“This was such a public thing,” he said.

Gottfriedson, 69, an internationally known poet who provides curriculum advice to Thompson Rivers University in Kamloops on Secwepemc Nation protocols and cultural practices, said community members still struggled with anxiety about the discovery and the next steps for the site, including exhumation.

“It’s different than a graveyard because we know the people who are taken to a graveyard and buried there,” he said. “It’s settled. But there’s so many unknowns with the 215 bodies. Those kids are buried in our yard. It’s a constant reminder.”

McLeod said the discovery of the unmarked graves at Kamloops had forced individuals, institutions and countries to face their past.

“It’s going to take some time, but it changed all of us in one way or another,” he said.