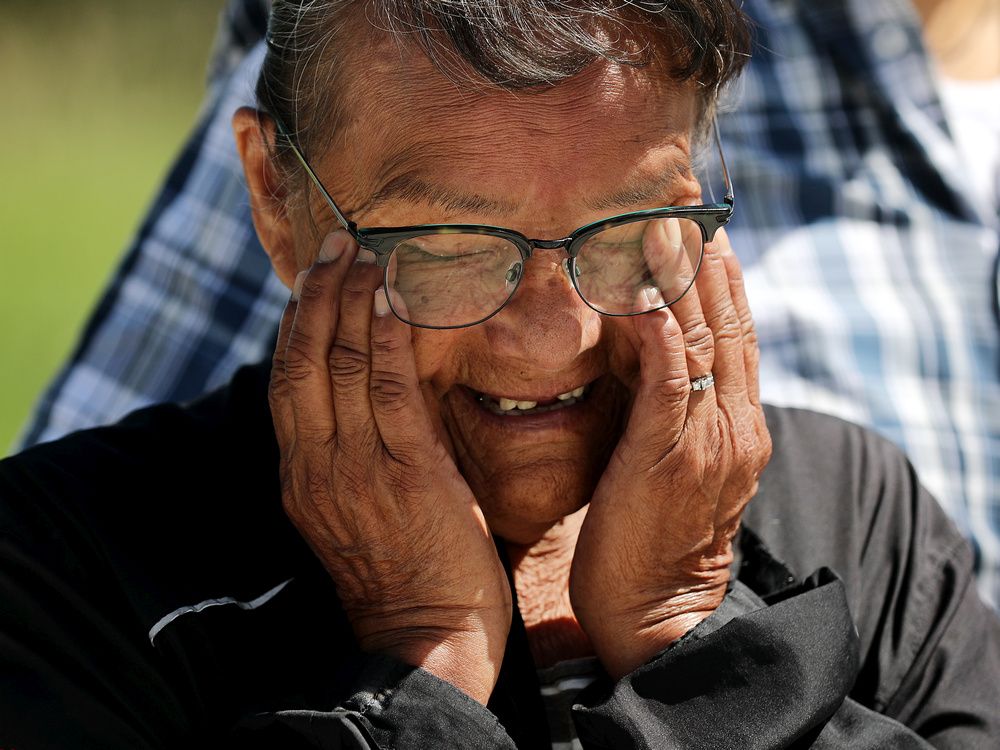 LAC STE. ANNE — Long-time Lac Ste. Anne pilgrimage attendee Mary Kootenayoo of Alexis Nakota Sioux Nation said Wednesday a special person will be looking down during the Pope’s visit on July 26 — her mother, a residential school survivor who passed away in August.

“I feel a lot of emotion because I never ever thought Pope Francis would come here,” said Kootenayoo, holding back tears.

“She really wanted the Pope to come here and he wasn’t even gonna come here yet and it was a dream that my mom had and she said … ‘When I see the Pope I’m going to die happy’ … My mom probably is smiling from heaven knowing that the Pope is coming here.”

Pope Francis will bless the Lac Ste. Anne water and visit the pilgrimage grounds on the third day of his Alberta visit where thousands are expected to join him.

Kootenayoo and her husband have been attending the pilgrimage for more than 60 years and her husband, Ken, said he doesn’t have the words to explain what this visit means to him.

“I’m looking forward to it and I hope I can be able to get something out of it that will rebuild, reassure my beliefs and I see this as a stepping stone to greater things for generations to come.”

Father Gary LaBoucane, spiritual adviser for the Lac Ste. Anne pilgrimage, said he was shocked when the Pope announced he would come to Lac Ste. Anne and he is looking forward to praying with him.

“I think it is significant that a leader would take time to come out and really listen to the experiences of people and to pray with people, to pray with us,” said LaBoucane.

The papal visit is bringing people across Canada to Alberta. Joseph Zoe was at the pilgrimage grounds on Wednesday afternoon blessing the water ahead of the Pope’s arrival. Zoe and his wife Violet drove 16 hours from Behchoko in the Northwest Territories for the Holy Father’s visit at Lac Ste. Anne.

Zoe left an offering of tobacco and oil at the pilgrimage site.

John Harvard, Lac Ste. Anne site coordinator for the papal visit, said a lot of work has gone into preparing for the Pope’s arrival. The sidewalk now leads from the gates all the way down to the water, which will allow Pope Francis to ride down to bless the water, he said.

He said the shrine has been repainted and cleaned up inside and a Métis log cabin is being built. Tents have been brought on site, along with 550 portable toilets — more than five times the number they typically order for the pilgrimage.

“It has been, I can honestly say, a whirlwind for the last three weeks but it is all coming together, my heart is awfully glad to see what’s happened,” said Harvard, who added the Pope’s visit has pushed them to put more work into the property.

Harvard said 15 years ago the pilgrimage would bring in crowds of about 40,000 people, compared to around 15,000 the last few years. However, he expects the Pope’s visit to create a sustained rise in attendance for the coming years.

“I live out in this area so I hear all the buzz, but when the Pope is blessing the water here, there will be people all over this lake that will want to be in the water at the same time that he’s blessing it. That’s pretty significant,” said Harvard.