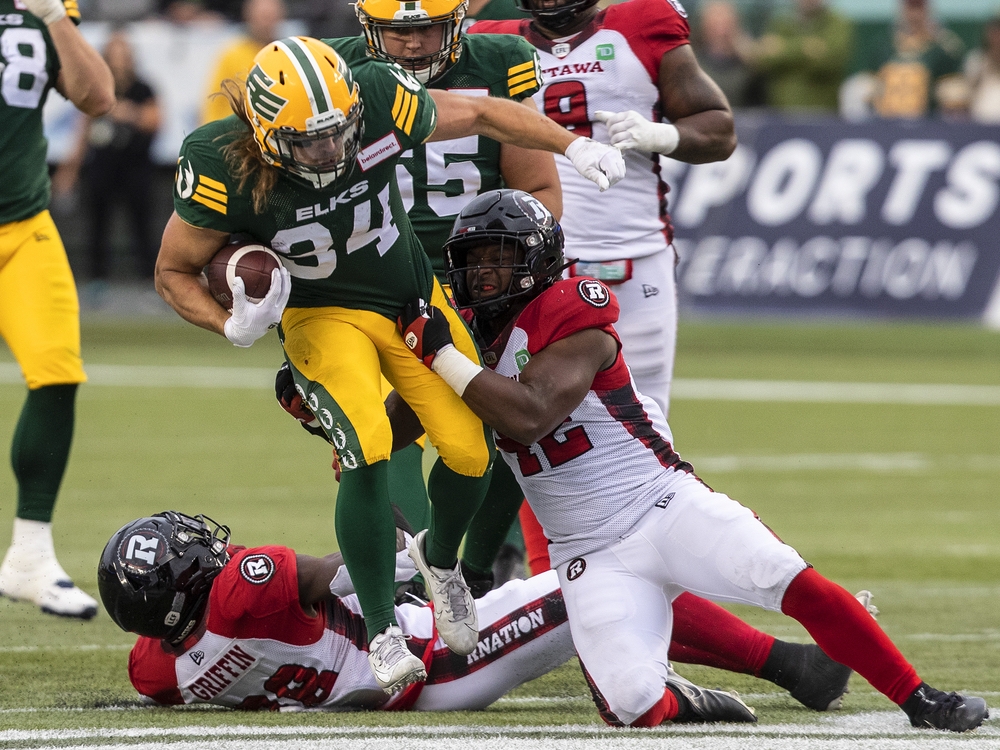 The problem with the Edmonton Elks is they play in Edmonton.

That’s got to be it, after dropping their 13th straight home game in a 25-18 loss to the Ottawa Redblacks on Saturday.

And if their next game inside Commonwealth Stadium follows the same trend as the last couple Labour Day Rematches, then the Elks would tie a Canadian Football League record with their 14th straight loss — a dubious distinction held by the Ottawa Rough Riders since 1988.

Fortunately, the Redblacks haven’t had much more luck on their own turf, where they’ve won just one of their last 20, which meant the two worst teams at home ended up splitting this home-and-home series with a win on the road. Go figure?

Here’s what we learned on Saturday:

The question the Elks have to be asking themselves right now is will they ever win another game in front of their own fans again?

If Edmonton can’t beat the only team in the league with a worse record than them, after having soundly winning, 30-12, just one week earlier, then what chance do they have against the Calgary Stampeders, Montreal Alouettes, Toronto Argonauts and B.C. Lions, as they close out their schedule with four of their final seven games at home.

All that’s left now is to try and avoid being the only team to ever go undefeated on their own turf for two straight seasons?

Then again, it’s not like the Elks are lighting it up on the road either, but going 3-3 on the year so far playing out of visitors locker-rooms is markedly better. Still, even a .500 record wouldn’t be enough to move them out of the basement of the West Division standings right now.

Fittingly, the Redblacks picked up where the Elks left off with their win a week ago in Ottawa, by scoring touchdowns on three consecutive drives in the first half to take a 20-3 lead.

It’s the same thing Edmonton had done to them at TD Place Stadium to open a second half they would dominate on the way to opening the back-to-back set with a road win.

So much for any confidence that may have inspired among the Elks, either offensively or defensively.

It’s not his fault the Elks chose him for the No. 1 job out of a training camp that began with no fewer than nine quarterbacks.

Nor did he ask to be traded after going 0-3 to open the season before being replaced by rookie Tre Ford. That’s just the way it worked out, as Nick Arbuckle found himself in the starting role for the fourth time this season, this one against his former team.

Little did he know, Elks head coach and general manager Chris Jones loaded the very bullet that did his team in on Saturday when he dealt Arbuckle away back on July 11. And in doing so, Arbuckle did in his first start with the Redblacks the one thing he was unable to do in Edmonton, win a football game.

Without a single touchdown reception, Saturday’s game was hardly a passing clinic. The wet weather made sure of that.

All five touchdowns were not only scored on the ground, but by three different quarterbacks, with all five of those rushes combining for a total of nine yards.

Despite the rain, Arbuckle still managed to complete 21 of 32 attempts, or 65.6 per cent, for 219 yards along with a QB keeper for a one-yard touchdown.

Completing just 14 of 37 passes, Taylor Cornelius had the least accurate outing of his entire season, with a completion percentage of just 37.8, for 287 yards and an interception. He also ran eight times for 39 yards and two touchdowns.

Despite the season-low accuracy, Cornelius’s 287 yards through the air stands as a season high.

A big reason for that were the efforts of the league’s highest-paid receiver, Kenny Lawler, who had a game-high 146 yards — and get this — on just three catches.

Unfortunately, he wasn’t out on the Elks’ final charge to attempt to tie the game with a touchdown after having his leg rolled upon in the pile during a quarterback sneak earlier in the fourth quarter.

“He should be fine,” Jones said. “Thank goodness we’ve got a long week where we’ve got a couple of extra days to prepare and hopefully he will be ready to roll.”

It was a rough outing for the Elks defensive line, as well, Saturday. Ese Mrabure left midway through the third quarter with trainers holding his left arm, while Makana Henry had to be helped off the field in the final 80 seconds with a noticeable limp.