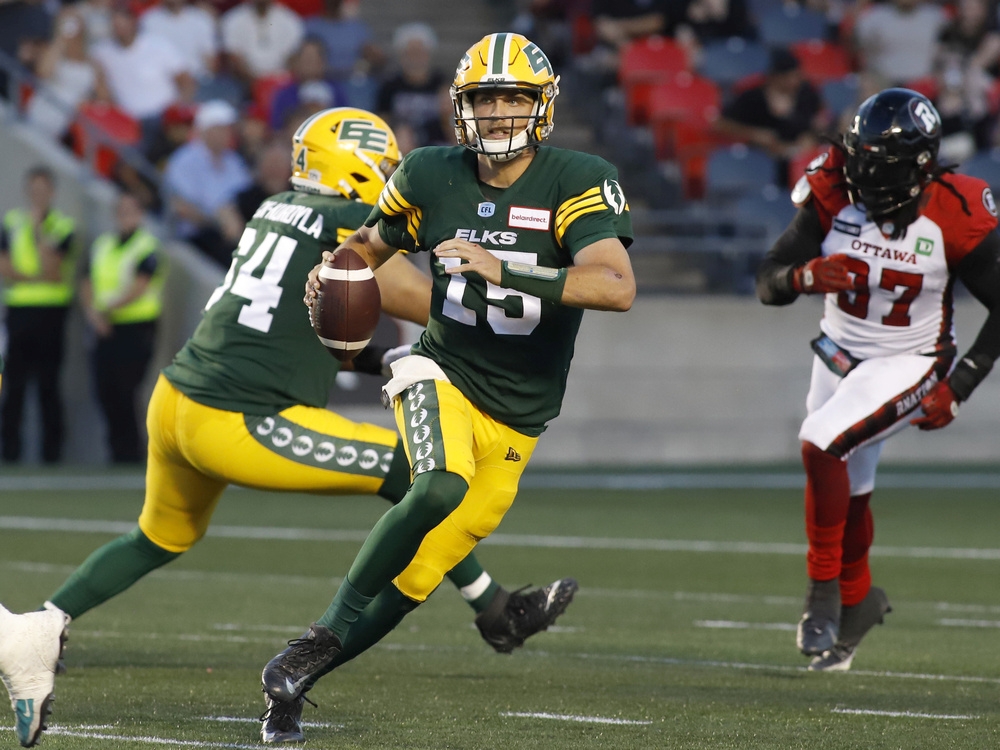 It’s not how you start, but how you finish that counts.

And not just in Friday’s game at TD Place Stadium, either, but the upcoming back half of the home-and-home series where neither the Edmonton Elks or Ottawa Redblacks want to be anywhere near their home field.

After a slow first half where the Elks spent more time showing why they are at the bottom of the West Division standings, they pulled themselves together to show why the Redblacks belong at the bottom of the entire Canadian Football League, with one lone win to show for 2022, so far.

At 3-7, the Elks open the second half of their schedule with a win but they are by no means out of the woods when it comes to the playoff hunt, sitting four points behind the fourth-place Saskatchewan Roughriders for even a chance at a crossover.

Here’s what we learned from Friday’s 30-12 win in Ottawa:

After one of the most clunky and unrefined penalty-filled first halves of football the Elks have put on display this season, they looked like an entirely different team coming out of halftime and stringing together three consecutive touchdown drives to not only take the lead, but put it in cruise control the rest of the way.

Having gone just three-for-10 for 45 yards over the first 30 minutes, Taylor Cornelius ended up a respectable 16-for-27 with 208 yards and two touchdowns, while also adding 47 yards on five carries for his second win in five starts this season. That doubles his victories from a year ago, where he went 1-7, with all three of those wins coming on the road against the East.

Most importantly, he didn’t throw an interception for the first time in his last eight starts.

Unfortunately, it appears Cornelius may be without the Elks’ second-leading receiver for the foreseeable future as veteran slotback Emmanuel Arceneaux left the stadium on crutches and in an air boot.

In fact, the Elks didn’t turn the ball over at all on Friday. For the first time all season, they didn’t cough up an interception, a fumble or a turnover on downs.

And that was a big reason for their success in the nation’s capital, where they came in sporting a division-worst turnover ratio of minus-8.

“We didn’t turn the ball over for the first time all year,” said Elks head coach and general manager Chris Jones. “And when you do that, you protect the football and can go on long drives.”

With eight penalties for 103 yards, the Elks are still showing an undisciplined side that had them trailing 12-9 at the half. Not that the Redblacks were much cleaner, getting flagged nine times for 81 yards.

There is no excuse to take a no-yards penalty at this point in the season, let alone multiple ones. And the Elks started this game the same way they ended the last one, with a penalty that ended up turning a field goal by the opposition into a touchdown.

The difference was they were able to bounce back from their mistakes this time.

Edmonton extended Ottawa’s rut to just one win in their last 20 games at home — a feat the likes of which no other team in the CFL has ever suffered.

Just don’t bet the farm on a similar result Saturday at Commonwealth Stadium, where the Elks have dropped their last 12 straight and are two losses away from tying the league record in that department held by the 1988 Ottawa Rough Riders.

The Elks haven’t given their fans a win at home since Oct. 12, 2019. And there are no guarantees they will be able to exorcise those demons against the Redblacks, no matter how down-and-out they are right now.

“We’ve now got to flip the page from this game and we need to go over there and play solid football at home this week,” Jones said. “They’re a well-coached football team. You saw they had a lot of wrinkles and things for us coming out of the bye that the good teams do.”

Regardless of where the win came from, the Elks are just glad to be back on the winning track after losing their previous three in a row.

“Yeah, it’s nice to be back. The guys have worked really hard,” Jones said. “You see them work so hard and they put themselves in such precarious situations, either with turnovers or penalties in the past and losing close games against good opponents.

“And there’s so much parity in our league, it’s not like one team is so much more dominant than the other.”