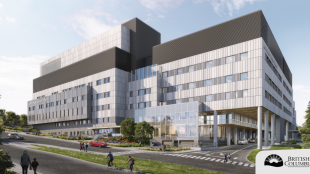 The premier attended a sod-turning ceremony to mark the beginning of a Burnaby Hospital upgrade expected to cost about $1.3 billion.

This is the hospital’s first major redevelopment in 40 years, which includes an expanded emergency department, a new cancer treatment centre and two towers, housing more operating rooms and 399 new beds.

However, while addressing the redevelopment plan, Horgan said he understands the concerns of residents in Clearwater, Port McNeill and other B.C. communities where wards are closing temporarily and patients are being referred to larger hospitals.

“I know British Columbians are perplexed and concerned when we have closures of emergency rooms for brief periods of time because of staff shortages. That’s a direct result of appropriate responses to a global pandemic,” he said.

Horgan says hospitals, similar to many other workplaces, are experiencing worker shortages resulting from the ongoing COVID-19 pandemic.

B.C. has increased the number of healthcare workers by 30,000 since the New Democrats were elected five years ago, according to Health Minister Adrian Dix.

Despite the hires, Horgan acknowledges, “we’re still not keeping pace.

“We’ve got an aging population. People are retiring. We need to ensure that we’re training the next generation coming forward,” Horgan admits. “We’re putting in place the building blocks. We need an infusion of cash not just here in B.C., but across the country, from our federal partner. And we’ll start to see this issue shift to a place where we want it to be and that is where healthcare workers can be confident that when they come to work, there’ll be someone to replace them at the end of the shift.”

The premier referenced a meeting held last week with western and territorial counterparts who want the federal government to open the purse strings to improve health care.

At the Western Premiers Conference in Saskatchewan, Horgan said healthcare services as they are now are not sustainable as the country emerges from the COVID-19 pandemic, as shortages of doctors, wait times for diagnosis and treatment were due to provinces being short-changed on federal dollars.

“We have seen a decline in federal participation in the delivery of public health care services over the past 30 years. And I believe and my colleagues believe that now is the time to reimagine public health care in Canada for the next century. And that involves making sure that our facilities are state of the art,” he added Monday.

“Our technologies have got us to a place … where the most dire of diagnoses can lead to a positive outcome. We need to have more of that all across the province. And we need to ensure that we can recruit and retain skilled workers to work in the state-of-the-art facilities. That involves making sure that we can address compensation right across the system.”

Horgan said provinces want a $28-billion boost in health transfers, pushing the federal share of healthcare costs to 35 per cent from the current 22 per cent.

The development to the Burnaby Hospital is expected to be completed in 2025.

– With files from Greg Bowman